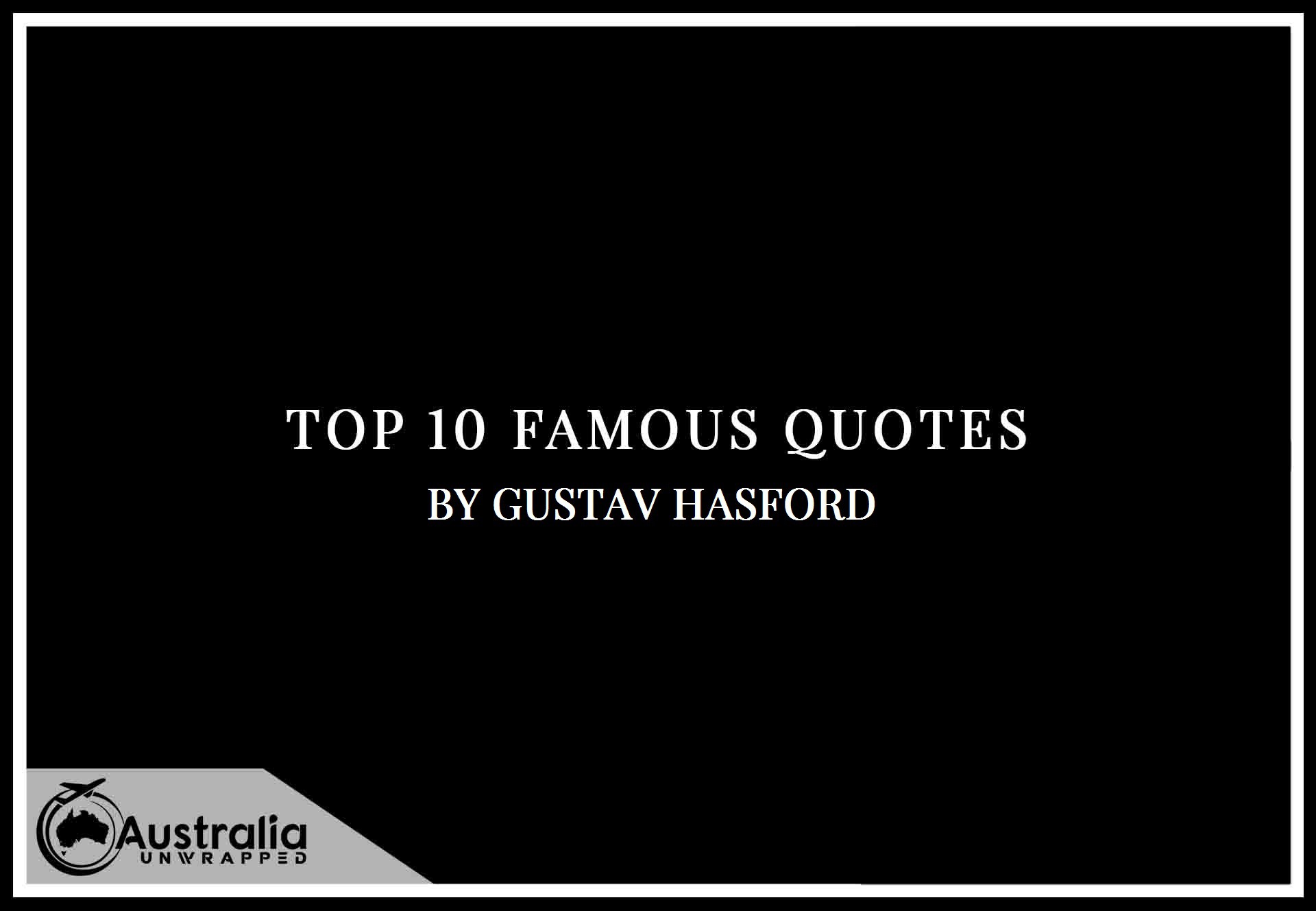 Gustav Hasford, a writer whom I am guessing you love? Here are our 10 best Gustav Hasford quotes for you to enjoy. At Australia Unwrapped we believe every book has at least one quotable line, and our mission is to find them all. Here you will find Gustav Hasford’s top 10 popular and famous quotes. Like every good writer Gustav Hasford made a number of memorable quotes, here are some of our favorites:

It was Jerry Gustave Hasford (November 28, 1947 – January 29, 1993) who wrote two major novels of the Vietnam war, The Short Timers and The Phantom Blooper, as well as A Gypsy Good Time. He was perhaps best known for co-writing with Stanley Kubrick and Michael Herr the 1987 film Full Metal Jacket, a screen adaptation of The Short Timers. It is considered one of the best depictions of the Vietnam War.
He was born on November 28, 1947, in Haleyville, Winston County, to Hassell and Hazel Hasford; he had one younger brother, Terry. Jasper native Jason Aaron, Hasford’s cousin, is an award-winning comic book writer. In 1966, Gustav Hasford left high school in Russellville, Franklin County, and refused to take his graduation exams to protest the poor education system in the state. He then joined the US Marine Corps as a combat correspondent with the First Marine Division in Vietnam. Upon returning from Vietnam, he attended Lower Columbia Community College, where he published his first story in the school newspaper, which would later serve as the basis for The Short Timers.

More from the Author: https://amzn.to/3QvtN1m

“Guns tell the truth. Guns never say, “I’m only kidding.” War is ugly because the truth can be ugly and war is very sincere.”
― Gustav Hasford, The Short-Timers

“I tell the squad a joke: “Stop me if you’re heard this. There was a Marine of nuts and bolts, half robot–weird but true–whose every move was cut from pain as though from stone. His stoney little hide had been crushed and broken. But he just laughed and said, ‘I’ve been crushed and broken before.’ And sure enough, he had the heart of a bear. His heart functioned for weeks after it had been diagnosed by doctors. His heart weighed half a pound. His heart pumped seven hundred thousand gallons of warm blood through one hundred thousand miles of veins, working hard–hard enough in twelve hours to lift one sixty-five ton boxcar one foot off the deck. He said. The world would not waste the heart of a bear, he said. On his clean blue pajamas many medals hung. He was a walking word of history, in the shop for a few repairs. He took it on the chin and was good. One night in Japan his life came out of his body–black–like a question mark. If you can keep your head while others are losing theirs perhaps you have misjudged the situation. Stop me if you’ve heard this…”
― Gustav Hasford, The Short-Timers

“The printer continues: “You cannot defeat us. You do not even know who we are. You cannot even see us. Your country lives inside a dream and tries to kill anything outside of the dream, but we live in the real world, so you cannot kill us. We have fought for twenty years and we will fight on until weare victorious, until we have freedom. Just as your forefathers did two hundred years ago. Uncle Ho began the Vietnamese Declaration of Independence by quoting the American Declaration of Independence: ‘All men are created equal, that they are endowed by their Creator with certain unalienable rights, and that among these are life, liberty and the pursuit of happiness.’ American armymen no longer fight to protect their liberty but to steal ours. Chien Si My, how did your great and heroic country lose its greatness and allow itself to be taken over by gangsters?”
― Gustav Hasford, The Phantom Blooper

“You cannot defeat us. You do not even know who we are. You cannot even see us. Your country lives inside a dream and tries to kill anything outside of the dream, but we live in the real world, so you cannot kill us. We have fought for twenty years and we will fight on until weare victorious, until we have freedom. Just as your forefathers did two hundred years ago. Uncle Ho began the Vietnamese Declaration of Independence by quoting the American Declaration of Independence: ‘All men are created equal, that they are endowed by their Creator with certain unalienable rights, and that among these are life, liberty and the pursuit of happiness.’ American armymen no longer fight to protect their liberty but to steal ours. Chien Si My, how did your great and heroic country lose its greatness and allow itself to be taken over by gangsters?”
― Gustav Hasford, The Phantom Blooper

“In your dream you call for Chaplain Charlie. You met the Navy chaplain when you interviewed him for a feature article you were writing. Chaplain Charlie was an amateur magician. With his magic, Chaplain Charlie entertained Marines in sick bays and distributed spiritual tourniquets to men who were still alive, but weaponless. To brutal, godless children Chaplain Charlie spoke about how God is merciful, despite appearances, about how the Ten Commandments lack detail because when you’re writing on stone tablets with lightning bolts you’ve got to be brief, about how the Free World will conquer Communism with aid of God and a few Marines, and about free fish. One day a Vietnamese child booby-trapped Chaplain Charlie’s black bag of tricks. Chaplain Charlie reached in and pulled out a bright ball of death…”
― Gustav Hasford

“The purpose of the bayonet training, Sergeant Gerheim explains, is to awaken our killer instincts. The killer instinct will make us fearless and aggressive, like animals. If the meek ever inherit the earth the strong will take it away from them. The weak exist to be devoured by the strong. Every Marine must pack his own gear. Every Marine must be the instrument of his own salvation. It’s hard, but there it is.”
― Gustav Hasford, The Short-Timers

“Just watch me. Do what I do. These guys will tell you that I am a monster, but I’m the only grunt in this squad that doesn’t have his head up his ass. In this world of shit, monsters live forever and everybody else dies. If you kill for fun, you’re a sadist. If you kill for money, you’re a mercenary. If you kill for both, you’re a Marine.”
― Gustav Hasford, The Short-Timers

“The article I actually write is a masterpiece. It takes talent to convince people that war is a beautiful experience. Come one, come all to exotic Viet Nam, the jewel of Southeast Asia, meet interesting, stimulating people of an ancient culture…and kill them. Be the first kid on your block to get a confirmed kill.”
― Gustav Hasford, The Short-Timers

“Raindrops thump my poncho like pebbles falling into a broken drum. Half asleep, my face pressed into my gear, I listen to the sounds of the horror that is everywhere, buried just beneath the surface of the earth. In my dreams of blood I make love to a skeleton. Bones click, the earth moves, my testicles explode.”
― Gustav Hasford, The Short-Timers

Quotes for all, here you found our selection of 10 Gustav Hasford quotes. Make sure you help by commenting your best Gustav Hasford quote below and sharing our favorite authors so we can look them up, read some of their works and give you the best quotes we can find. We hope you enjoyed our top 10 quotes by Gustav Hasford. However, feel free to comment below if you disagree or would like to include some other great and memorable Gustav Hasford quotes in our list.

“Every so often, the gods stop laughing long enough to do something terrible. There are few facts that are not brutal. The bitter, insufficient truth is that God recovered, but fun is dead.
Alcohol: the antidote to civilization. Alcoholism is a fatal disease. But then I am not a member of Alcoholics Anonymous, because I don’t want to be cured. Alcoholism is suicide with training wheels. I watch myself sinking, an inch at a time, and I spit into the eye of fate, like Doc Holliday, who died too weak to lift a playing card. My traitorous and degenerate attitude is sort of my book review of the world we live in. I resign from the human race. I declare myself null and void; folded, spindled, and mutilated.
. . .This bar is an oasis for the night people, the street people, the invisible tribe, the people who simply do not exist in the orderly world we see in Time – the weekly science fiction magazine published by the Pentagon – an orderly world which is a sanitized Emerald City populated by contented Munchkins who pay taxes to buy tanks, nerve gas, and bombers and not a world which is a bus-station toilet where the air is a chemical cocktail of cancer-causing agents, children are starving, and the daily agenda is kill or be killed.
When the world demands that you be larger than life, and you are finding it hard enough just being life-size, you can come here, in the messy hemorrhaging of reality, let your hair down, take your girdle off, and not be embarrassed by your wounds and deformities. Here among the terminally disenchanted you are graded not by the size of the car on display in your driveway but by the size of your courage in the face of nameless things.
. . .Half of these people look like they just came back from the moon, and all of them are sworn witnesses for the prosecution on the charge that Earth serves as Hell for some other planet.”
― Gustav Hasford, A Gypsy Good Time

More from the Author: https://amzn.to/3QvtN1m