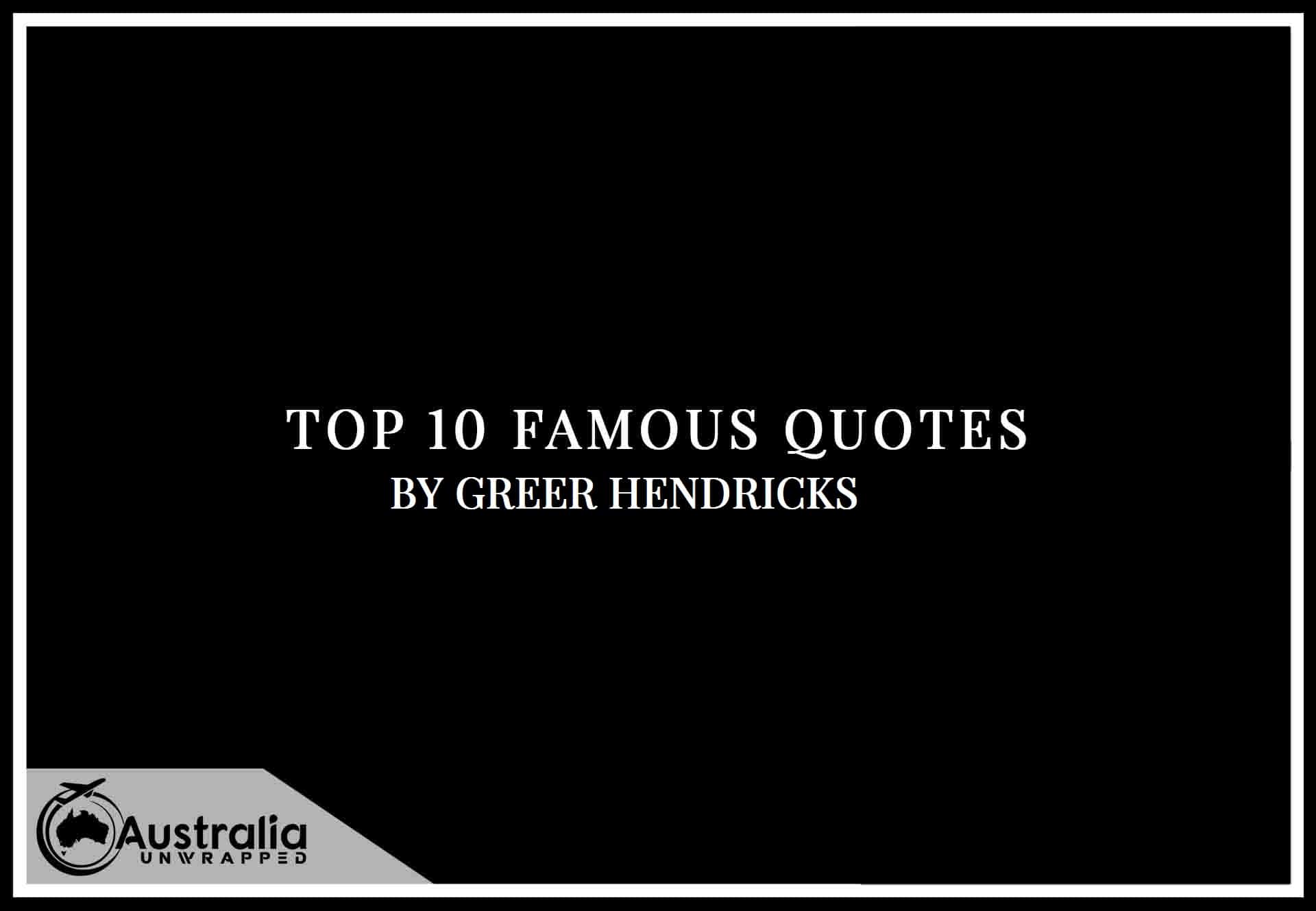 Greer Hendricks, a writer whom I am guessing you love? Here are our 10 best Greer Hendricks quotes for you to enjoy. At Australia Unwrapped we believe every book has at least one quotable line, and our mission is to find them all. Here you will find Greer Hendricks’s top 10 popular and famous quotes. Like every good writer Greer Hendricks made a number of memorable quotes, here are some of our favorites:

The number one New York Times bestselling authors of THE WIFE BETWEEN US, AN ANONYMOUS GIRL, YOU ARE NOT ALONE, and THE GOLDEN COUPLE are Greer Hendricks and Sarah Pekkanen.

Prior to becoming a writer, Greer earned a master’s degree at Columbia University in journalism and worked as an editor at Simon & Schuster for two decades. Her writing has appeared in publications such as The New York Times, Allure, Publishers Weekly, and more.

More from the Author: https://amzn.to/3QAoaid

“Know thy enemy, Sun Tzu wrote in The Art of War.”
― Greer Hendricks, The Wife Between Us

“Gaze detection, it’s called—our ability to sense when someone is observing us. An entire system of the human brain is devoted to this genetic inheritance from our ancestors, who relied on the trait to avoid becoming an animal’s prey.”
― Greer Hendricks, The Wife Between Us

“I was happy, I think, but I wonder now if my memory is playing tricks on me. If it is giving me the gift of an illusion. We all layer them over our remembrances; the filters through which we want to see our lives.”
― Greer Hendricks, The Wife Between Us

“For years, I have allowed fear to dominate me. But as I sit in the cab, I realize another emotion is rising to the surface: anger. It felt cathartic to unleash my rage at Richard after absorbing his for so long.”
― Greer Hendricks, The Wife Between Us

“These moments, as unique to each individual as strands of DNA, can at their best cause the sensation of a catapult into the shimmer of stars. At the opposite extreme, they can feel like a descent into quicksand.”
― Greer Hendricks, An Anonymous Girl

“We all have reasons for our actions. Even if we hide the reason from those who think they know us best. Even if the reasons are so deeply buried we can’t recognize them ourselves.”
― Greer Hendricks, An Anonymous Girl

“People are motivated to break their moral compasses for a variety of primal reasons: survival, hate, love, envy, passion. And money.”
― Greer Hendricks, An Anonymous Girl

“We all have reasons for our judgments, even if those reasons are so deeply buried we don’t recognize them ourselves.”
― Greer Hendricks, An Anonymous Girl

“I’m not afraid of storms, for I’m learning how to sail my ship.’ Well, I’ve never feared bad weather, either.”
― Greer Hendricks, The Wife Between Us

“She is oblivious to what I have done to her.
She is unaware of the damage I have wrought; the ruin I have set in motion.
To this beautiful young woman with the heart-shaped face and lush body-the woman my husband Richard, left me for-I’m as invisible as the pigeon scavenging on the sidewalk next to me.
She has no idea what will happen to her if she continues like this.
None at all.”
― Greer Hendricks, The Wife Between Us

More from the Author: https://amzn.to/3QAoaid