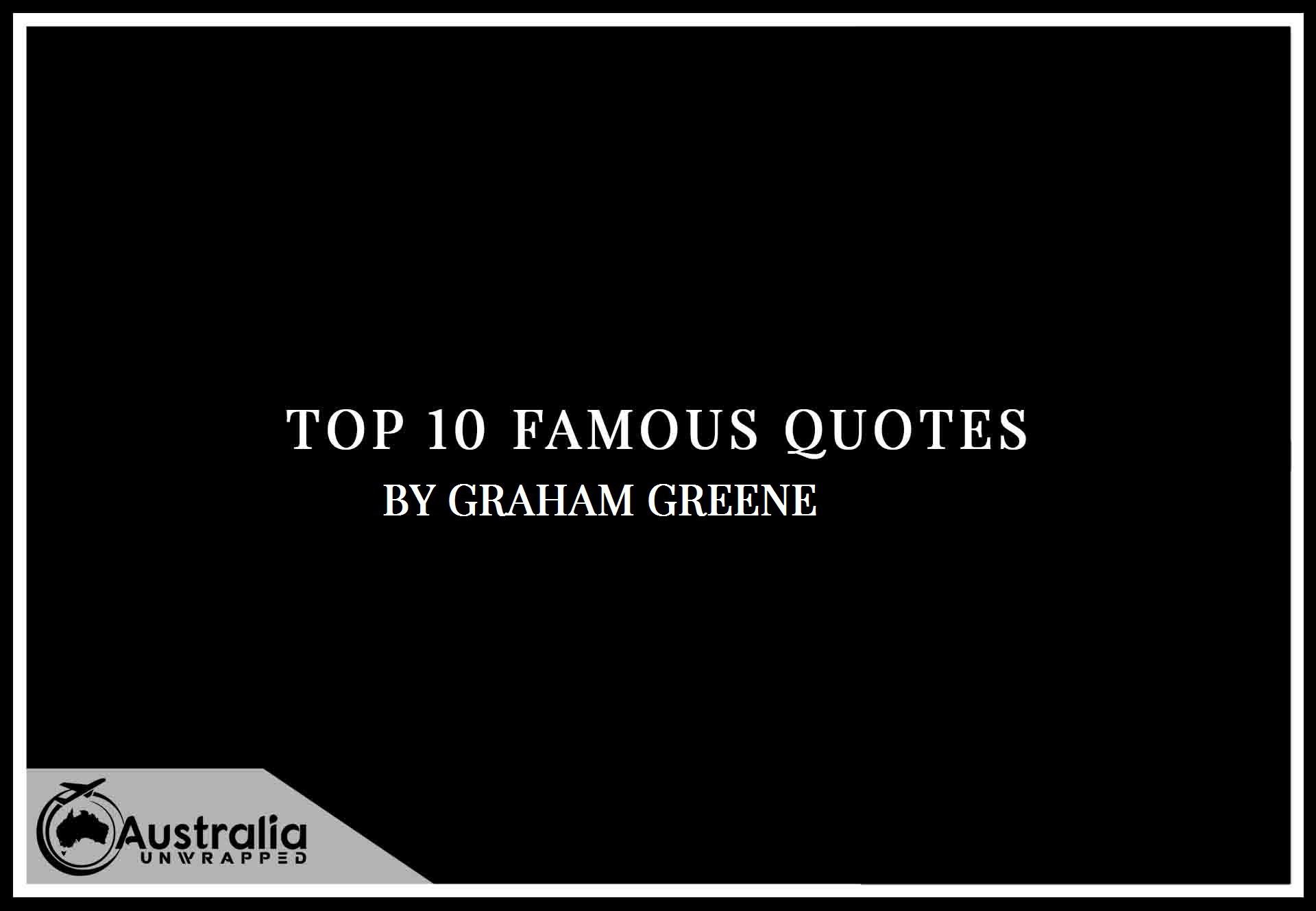 Graham Greene, a writer whom I am guessing you love? Here are our 10 best Graham Greene quotes for you to enjoy. At Australia Unwrapped we believe every book has at least one quotable line, and our mission is to find them all. Here you will find Graham Greene’s top 10 popular and famous quotes. Like every good writer Graham Greene made a number of memorable quotes, here are some of our favorites:

Henry Graham Greene, OM, CH was an English novelist, short story writer, playwright, screenwriter, travel writer, and critic who explored the ambivalent moral and political issues of the modern world in his works. It was Greene who combined serious literary acclaim with wide popularity.

Although Greene objected strongly to being described as a “Catholic novelist” rather than as a “novelist who happened to be Catholic”, many of his writings are based on Catholic religious themes, particularly Brighton Rock, The Heart of the Matter, The End of the Affair, and The Power and the Glory, four of which are highly influential in Catholic literature. As well as The Quiet American, Our Man in Havana and The Human Factor, this author shows an insatiable interest in international politics and espionage.

More from the Author: https://amzn.to/3AdKU26

“Hate is a lack of imagination.”
― Graham Greene, The Power and the Glory

“The sense of unhappiness is so much easier to convey than that of happiness. In misery we seem aware of our own existence, even though it may be in the form of a monstrous egotism: this pain of mine is individual, this nerve that winces belongs to me and to no other. But happiness annihilates us: we lose our identity.”
― Graham Greene, The End of the Affair

“Writing is a form of therapy; sometimes I wonder how all those who do not write, compose, or paint can manage to escape the madness, melancholia, the panic and fear which is inherent in a human situation.”
― Graham Greene, Ways of Escape

“It’s a strange thing to discover and to believe that you are loved when you know that there is nothing in you for anybody but a parent or a God to love.”
― Graham Greene, The End of the Affair

“But it is impossible to go through life without trust; that is to be imprisoned in the worst cell of all, oneself.”
― Graham Greene, The Ministry of Fear

“I had to touch you with my hands, I had to taste you with my tongue; one can’t love and do nothing.”
― Graham Greene, The End of the Affair

“Champagne, if you are seeking the truth, is better than a lie detector.”
― Graham Greene

“Like some wines our love could neither mature nor travel.”
― Graham Greene, The Comedians

“Innocence is a kind of insanity”
― Graham Greene, The Quiet American

Quotes for all, here you found our selection of 10 Graham Greene quotes. Make sure you help by commenting your best Graham Greene quote below and sharing our favorite authors so we can look them up, read some of their works and give you the best quotes we can find. We hope you enjoyed our top 10 quotes by Graham Greene. However, feel free to comment below if you disagree or would like to include some other great and memorable Graham Greene quotes in our list.

“You know what the fellow said – in Italy, for thirty years under the Borgias, they had warfare, terror, murder and bloodshed, but they produced Michelangelo, Leonardo da Vinci and the Renaissance. In Switzerland, they had brotherly love, they had five hundred years of democracy and peace – and what did that produce? The cuckoo clock.”
― Graham Greene, The Third Man

More from the Author: https://amzn.to/3AdKU26