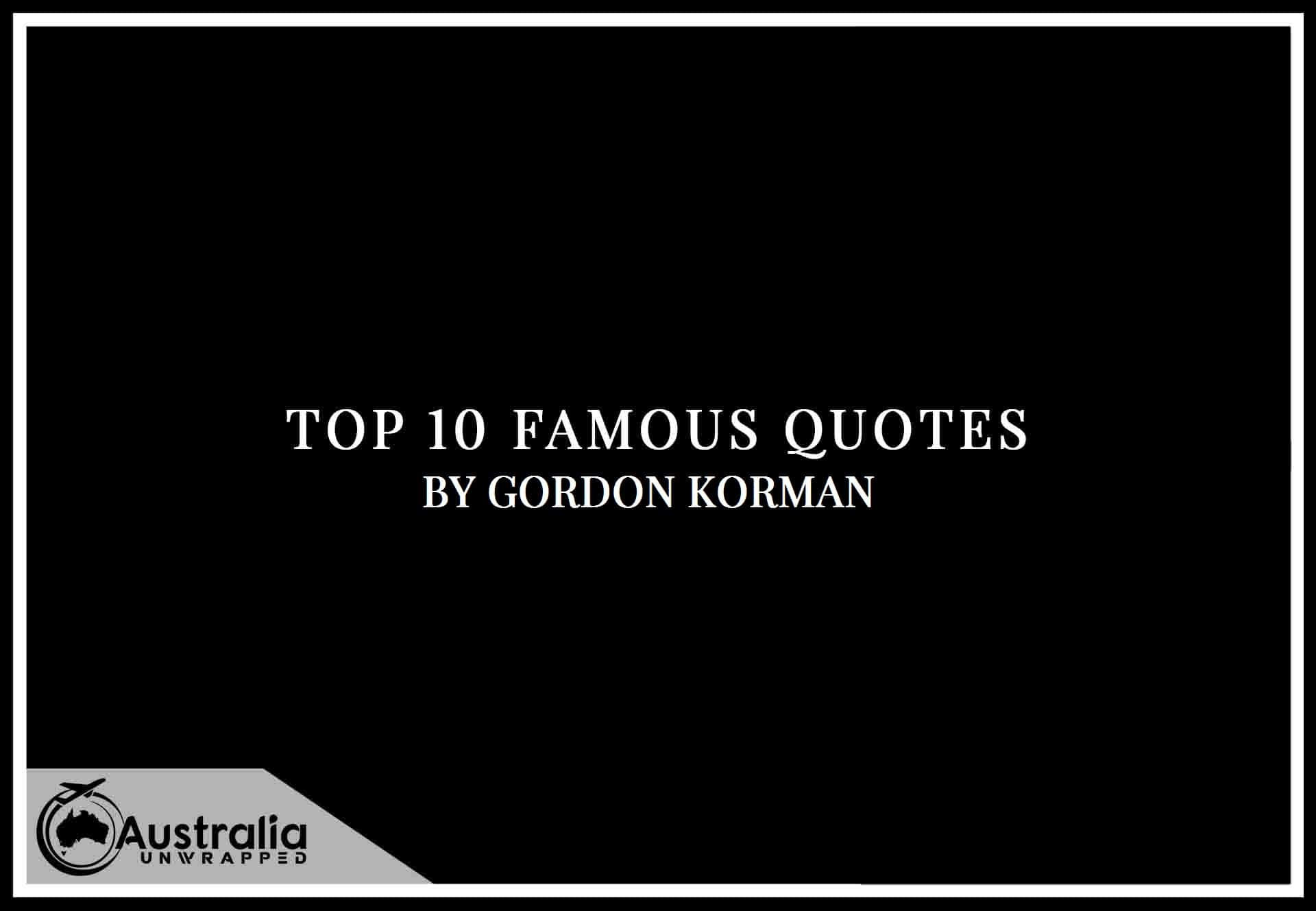 Love reading? Then it’s likely you will love a good quote from your favourite author. This article covers Gordon Korman’s Top 10 Popular and Famous Quotes that we at Australia Unwrapped have collected from some of his greatest works. Gordon Korman quotes to remember and here you will find 10 of the best. A memorable quote can stay with you and can be used along your journey. Choosing Gordon Korman’s top 10 quotes is not easy, but here they are:

“I hate France. It’s like the whole country’s on a diet”
― Gordon Korman, One False Note

“The au pair was bug-eyed. “What happened back there?”
“It’s not our fault!” Dan babbled. “Those guys are crazy! They’re like mini-Darth Vaders without the mask!”
“They’re Benedictine monks!” Nellie exclaimed. “They’re men of peace! Most of them are under vows of silence!”
“Yeah, well, not anymore,” Dan told her. “They cursed us out pretty good. I don’t know the language, but some things you don’t have to translate.”
― Gordon Korman, One False Note

“Don’t have to see,” the pilot grunted. “Olga knows the way.”
“Funny name for an aircraft,” Grace commented. “Is it after your wife?”
“My gun.”
Grace stared at him. “You named your plane after a gun?”
“It was a very good gun.”
― Gordon Korman, Vespers Rising

“Ian Kabra rolled up his window. “My god, what’s that smell?”
Behind the wheel, Sinead laughed. “It’s called fresh air. Growing up in London, you’ve probably never breathed it before.”
“And I hope I never breathe it again.”
― Gordon Korman, The Medusa Plot

“The dog always dies. Go to the library and pick out a book with an award sticker and a dog on the cover. Trust me, that dog is going down.”
― Gordon Korman, No More Dead Dogs

“Don’t think of it as losing a boyfriend. Think of it as gaining a stalker.”
-Dan Cahill”
― Gordon Korman, The Medusa Plot

“In our family, you don’t get a childhood. We’re too busy trying to dominate the world.”
― Gordon Korman, The Emperor’s Code

“For someone who’e smarter than a supercomputer, sometimes you’re a real idiot.”
― Gordon Korman, One False Note

“Ask yourself: ‘Do I feel the need to laminate?’ Then teaching is for you.”
― Gordon Korman

“No fair! Those guys ripped off what we rightfully stole!”
― Gordon Korman, The Medusa Plot

“He watched in awe as she stacked up an enormous armload of music. “There,” she finished, slapping Frank Zappa’s Greatest Hits on top of the pile. “That should do for a start.”
“You are a music lover,” said the wide-eyed cashier.
“No, I’m a kleptomaniac.” And she dashed out the door.
He was so utterly shocked that it took him a moment to run after her.
With a meaningful nod in the direction of the astounded Cahills, she barreled down the cobblestone street with her load.
“Fermati!” shouted the cashier, scrambling in breathless pursuit.
Nellie let a few CDs drop and watched with satisfaction over her shoulder as the clerk stopped to pick them up. The trick would be to keep the chase going just long enough for Amy and Dan to search Disco Volante.
Yikes, she reflected suddenly, I’m starting to think like a Cahill….
And if she was nuts enough to hang around this family, it was only going to get worse.”