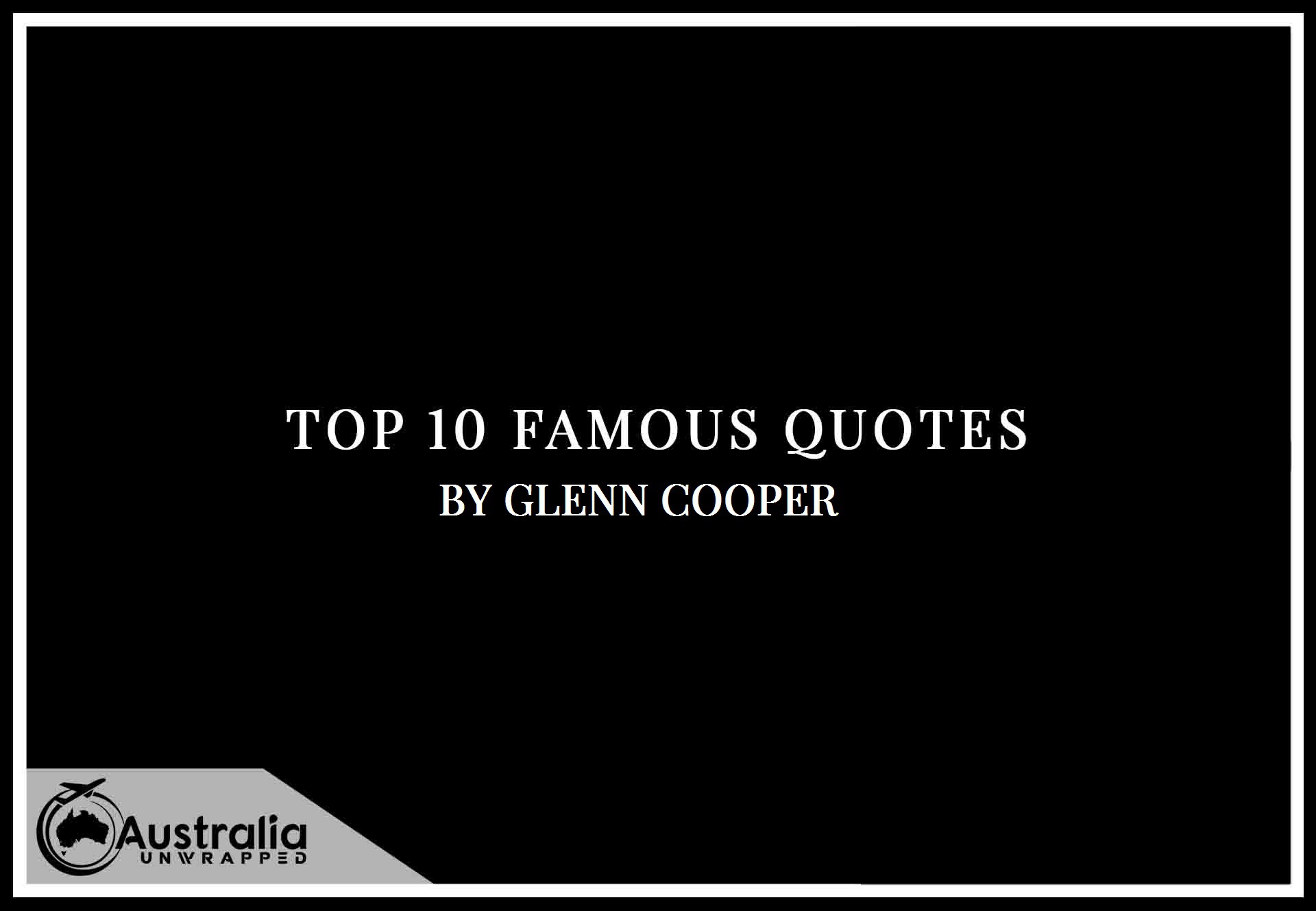 Love reading? Then it’s likely you will love a good quote from your favourite author. This article covers Glenn Cooper’s Top 10 Popular and Famous Quotes that we at Australia Unwrapped have collected from some of his greatest works. Glenn Cooper quotes to remember and here you will find 10 of the best. A memorable quote can stay with you and can be used along your journey. Choosing Glenn Cooper’s top 10 quotes is not easy, but here they are:

“without Excalibur the Grail cannot be discovered”
― Glenn Cooper, The Resurrection Maker

“hypothesis. In fact, I don’t know what else could have made this image. You press a piece of linen against the corpse of a bloody man, you anoint him with oils, leave him in a hot place, a cold place, any place, and you’re not going to get this kind of a perfect, almost photographic negative of a human body complete with the stigmata of the crucifixion spikes, the dumbbell-shaped scourge marks from the flagrum—the Roman whip—the blood and serum stains from where his lung was punctured by the spear.”
― Glenn Cooper, The Resurrection Maker

“For the crowd’s immeasurable pleasure, as Peter’s life was ebbing away, two hundred Christian men and women were dragged into the stadium, stripped naked, flogged and tied to stakes. Ravenous dogs, mad at the scent of blood, were brought in to finish them off. And that night and for nights on end Nero’s gardens were the scene of a ghastly display: Christians whom Nero had dipped in animal fat and turned into human torches to illuminate the husk of a city that had once been the great Rome.”
― Glenn Cooper, The Devil Will Come

“the radiocarbon dating done in 1988 under Vatican supervision came up with a date of thirteenth or fourteenth century but there’s been a lot of criticism about sampling errors, contamination problems and even the possibility that they dated a piece from medieval patchwork. But there are other features, like the sewing technique of the linen and limestone particles embedded in the weave, which are the same as from Roman tombs, that all suggest a first century date.”
― Glenn Cooper, The Resurrection Maker

“To a blare of trumpets Peter the Apostle was dragged onto the track. He’d been arrested along with the priest Cornelius and several followers at a Christian house near the Pincian Hill. When the soldiers arrived Peter had smiled at them as if he were welcoming old friends. Pater was hauled onto a high wooden platform at the center of the racetrack for all to see and Tigellinus loudly proclaimed him to be the ringleader of the plot to destroy Rome.”
― Glenn Cooper, The Devil Will Come

“Luther proclaimed, Paul had written in Romans that it was God who would save us: “For in the Gospel, a righteousness from God is revealed, a righteousness that is by faith from first to last, just as it is written the righteous shall live by faith.” Surely, Luther argued, men did not need the Pope and priests and all the trappings and finery of the Church for salvation. All they required was a personal relationship with God.”
― Glenn Cooper, Book of Souls

“But from my point of view there is no convincing artistic technique that could have simulated this image of a crucified man on a piece of linen. The techniques weren’t known in the first century, they weren’t there in the fourteenth century, and I don’t believe anyone could do it in the twenty-first century. That’s why I think it’s real.”
― Glenn Cooper, The Resurrection Maker

“says here that J-H-S stands for Jesus Hominum Salvator. Jesus Savior of Humanity. The cross is Greek because with four equal arms it’s the best to symbolize the conjunctions of opposites in the earthly world. And Arthur, look at these pictures. You couldn’t see it on mine. On the two ends of the cross the Greek letters—alpha and omega.”
― Glenn Cooper, The Resurrection Maker

“there are men who are ancient and determined enemies of the Church of Rome who live in perpetual hope of its destruction”
― Glenn Cooper, The Devil Will Come

“In the year 1112, Cîteaux Abbey was still all wood and no stone. It had been established fifteen years earlier but the abbot, Stephen Harding, a flinty Englishman, had not received new novices for some time. He was overjoyed by this influx of humanity and he welcomed Bernard and his entourage with open arms. That first cold night in the lay dormitory, Bernard blissfully lay awake, the crowded room resonating with the snores of exhausted men. In the days and weeks to come, the harder the travails the greater his pleasure and in the future he would tell all novices at his gate: ‘If you desire to live in this house, leave your body behind; only spirits can enter here.”