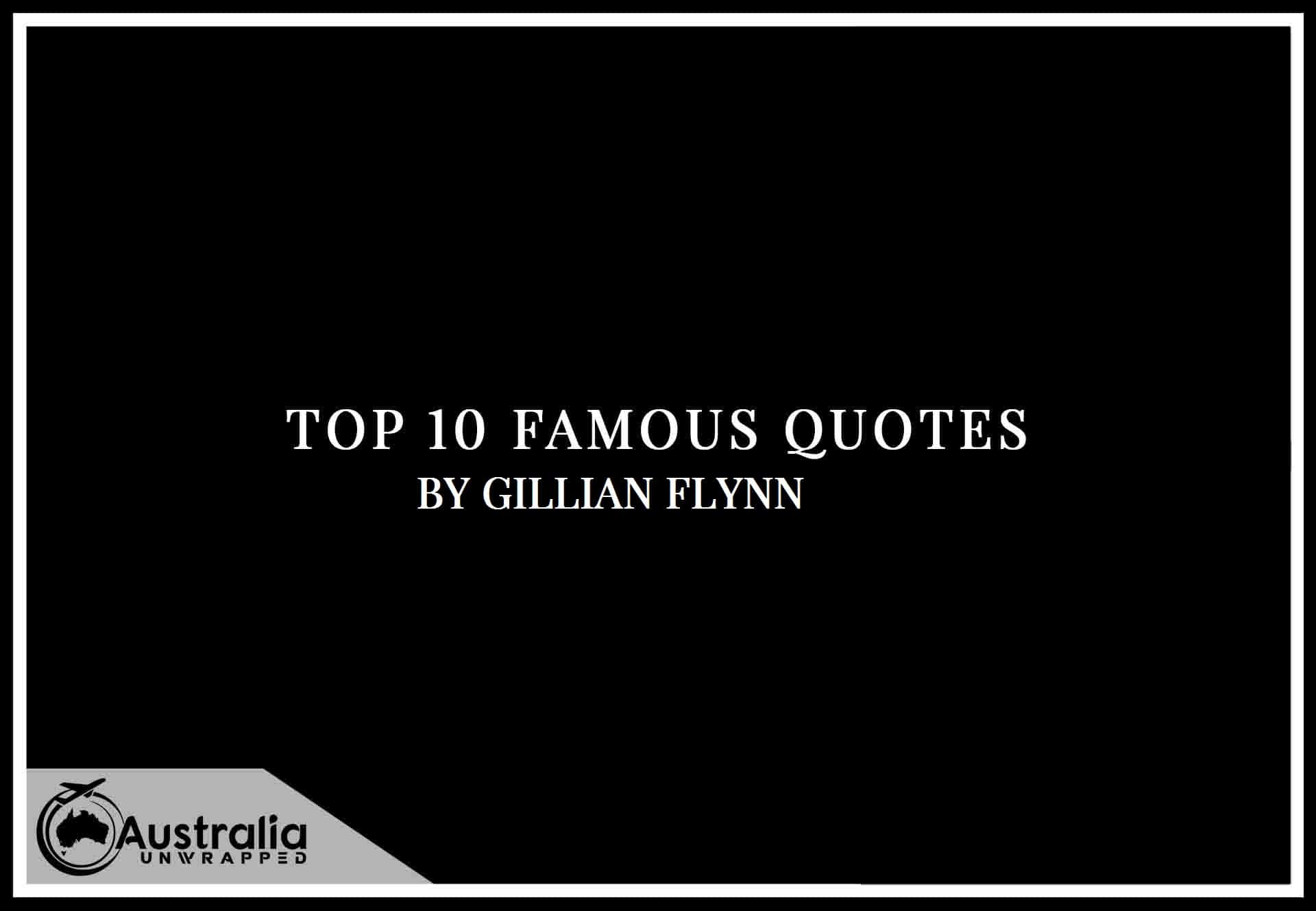 Gillian Flynn, a writer whom I am guessing you love? Here are our 10 best Gillian Flynn quotes for you to enjoy. At Australia Unwrapped we believe every book has at least one quotable line, and our mission is to find them all. Here you will find Gillian Flynn’s top 10 popular and famous quotes. Like every good writer Gillian Flynn made a number of memorable quotes, here are some of our favorites:

She has received praise from a wide range of authors, including Stephen King. There is a dark plot involving a serial killer in a Missouri town, and a reporter who has returned from Chicago to cover the event. There are themes of dysfunctional families, violence, and self-harm.

It was shortlisted for the Edgar Award for Best First Novel by an American Writer, the Crime Writers’ Association Duncan Lawrie Award, CWA New Blood, and Ian Fleming Steel Daggers, winning both awards.

Flynn grew up in Kansas City, Missouri, but now lives in Chicago. Graduated from the University of Kansas and earned a Master’s degree from Northwestern University.

More from the Author: https://amzn.to/3w3LzAT

“Sleep is like a cat: It only comes to you if you ignore it.”
― Gillian Flynn, Gone Girl

“Men always say that as the defining compliment, don’t they? She’s a cool girl. Being the Cool Girl means I am a hot, brilliant, funny woman who adores football, poker, dirty jokes, and burping, who plays video games, drinks cheap beer, loves threesomes and anal sex, and jams hot dogs and hamburgers into her mouth like she’s hosting the world’s biggest culinary gang bang while somehow maintaining a size 2, because Cool Girls are above all hot. Hot and understanding. Cool Girls never get angry; they only smile in a chagrined, loving manner and let their men do whatever they want. Go ahead, shit on me, I don’t mind, I’m the Cool Girl.

Men actually think this girl exists. Maybe they’re fooled because so many women are willing to pretend to be this girl. For a long time Cool Girl offended me. I used to see men – friends, coworkers, strangers – giddy over these awful pretender women, and I’d want to sit these men down and calmly say: You are not dating a woman, you are dating a woman who has watched too many movies written by socially awkward men who’d like to believe that this kind of woman exists and might kiss them. I’d want to grab the poor guy by his lapels or messenger bag and say: The bitch doesn’t really love chili dogs that much – no one loves chili dogs that much! And the Cool Girls are even more pathetic: They’re not even pretending to be the woman they want to be, they’re pretending to be the woman a man wants them to be. Oh, and if you’re not a Cool Girl, I beg you not to believe that your man doesn’t want the Cool Girl. It may be a slightly different version – maybe he’s a vegetarian, so Cool Girl loves seitan and is great with dogs; or maybe he’s a hipster artist, so Cool Girl is a tattooed, bespectacled nerd who loves comics. There are variations to the window dressing, but believe me, he wants Cool Girl, who is basically the girl who likes every fucking thing he likes and doesn’t ever complain. (How do you know you’re not Cool Girl? Because he says things like: “I like strong women.” If he says that to you, he will at some point fuck someone else. Because “I like strong women” is code for “I hate strong women.”)”
― Gillian Flynn, Gone Girl

“For several years, I had been bored. Not a whining, restless child’s boredom (although I was not above that) but a dense, blanketing malaise. It seemed to me that there was nothing new to be discovered ever again. Our society was utterly, ruinously derivative (although the word derivative as a criticism is itself derivative). We were the first human beings who would never see anything for the first time. We stare at the wonders of the world, dull-eyed, underwhelmed. Mona Lisa, the Pyramids, the Empire State Building. Jungle animals on attack, ancient icebergs collapsing, volcanoes erupting. I can’t recall a single amazing thing I have seen firsthand that I didn’t immediately reference to a movie or TV show. A fucking commercial. You know the awful singsong of the blasé: Seeeen it. I’ve literally seen it all, and the worst thing, the thing that makes me want to blow my brains out, is: The secondhand experience is always better. The image is crisper, the view is keener, the camera angle and the soundtrack manipulate my emotions in a way reality can’t anymore. I don’t know that we are actually human at this point, those of us who are like most of us, who grew up with TV and movies and now the Internet. If we are betrayed, we know the words to say; when a loved one dies, we know the words to say. If we want to play the stud or the smart-ass or the fool, we know the words to say. We are all working from the same dog-eared script.

It’s a very difficult era in which to be a person, just a real, actual person, instead of a collection of personality traits selected from an endless Automat of characters.

And if all of us are play-acting, there can be no such thing as a soul mate, because we don’t have genuine souls.

It had gotten to the point where it seemed like nothing matters, because I’m not a real person and neither is anyone else.

I would have done anything to feel real again.”
― Gillian Flynn, Gone Girl

“It’s a very difficult era in which to be a person, just a real, actual person, instead of a collection of personality traits selected from an endless Automat of characters.”
― Gillian Flynn, Gone Girl

“Love makes you want to be a better man—right, right. But maybe love, real love, also gives you permission to just be the man you are.”
― Gillian Flynn, Gone Girl

“There’s a difference between really loving someone and loving the idea of her.”
― Gillian Flynn, Gone Girl

“The face you give the world tells the world how to treat you.”
― Gillian Flynn, Sharp Objects

“A lot of people lacked that gift: knowing when to fuck off.”
― Gillian Flynn, Gone Girl

Quotes for all, here you found our selection of 10 Gillian Flynn quotes. Make sure you help by commenting your best Gillian Flynn quote below and sharing our favorite authors so we can look them up, read some of their works and give you the best quotes we can find. We hope you enjoyed our top 10 quotes by Gillian Flynn. However, feel free to comment below if you disagree or would like to include some other great and memorable Gillian Flynn quotes in our list.

“The ones who are not soul-mated – the ones who have settled – are even more dismissive of my singleness: It’s not that hard to find someone to marry, they say. No relationship is perfect, they say – they, who make do with dutiful sex and gassy bedtime rituals, who settle for TV as conversation, who believe that husbandly capitulation – yes, honey, okay, honey – is the same as concord. He’s doing what you tell him to do because he doesn’t care enough to argue, I think. Your petty demands simply make him feel superior, or resentful, and someday he will fuck his pretty, young coworker who asks nothing of him, and you will actually be shocked.

Give me a man with a little fight in him, a man who calls me on my bullshit. (But who also kind of likes my bullshit.) And yet: Don’t land me in one of those relationships where we’re always pecking at each other, disguising insults as jokes, rolling our eyes and ‘playfully’ scrapping in front of our friends, hoping to lure them to our side of an argument they could not care less about. Those awful if only relationships: This marriage would be great if only… and you sense the if only list is a lot longer than either of them realizes.

So I know I am right not to settle, but it doesn’t make me feel better as my friends pair off and I stay home on Friday night with a bottle of wine and make myself an extravagant meal and tell myself, This is perfect, as if I’m the one dating me. As I go to endless rounds of parties and bar nights, perfumed and sprayed and hopeful, rotating myself around the room like some dubious dessert. I go on dates with men who are nice and good-looking and smart – perfect-on-paper men who make me feel like I’m in a foreign land, trying to explain myself, trying to make myself known. Because isn’t that the point of every relationship: to be known by someone else, to be understood? He gets me. She gets me. Isn’t that the simple magic phrase?

So you suffer through the night with the perfect-on-paper man – the stutter of jokes misunderstood, the witty remarks lobbed and missed. Or maybe he understands that you’ve made a witty remark but, unsure of what to do with it, he holds it in his hand like some bit of conversational phlegm he will wipe away later. You spend another hour trying to find each other, to recognise each other, and you drink a little too much and try a little too hard. And you go home to a cold bed and think, That was fine. And your life is a long line of fine.”
― Gillian Flynn, Gone Girl

More from the Author: https://amzn.to/3w3LzAT