Gerry Cinnamon, A Life Through Concerts and Music 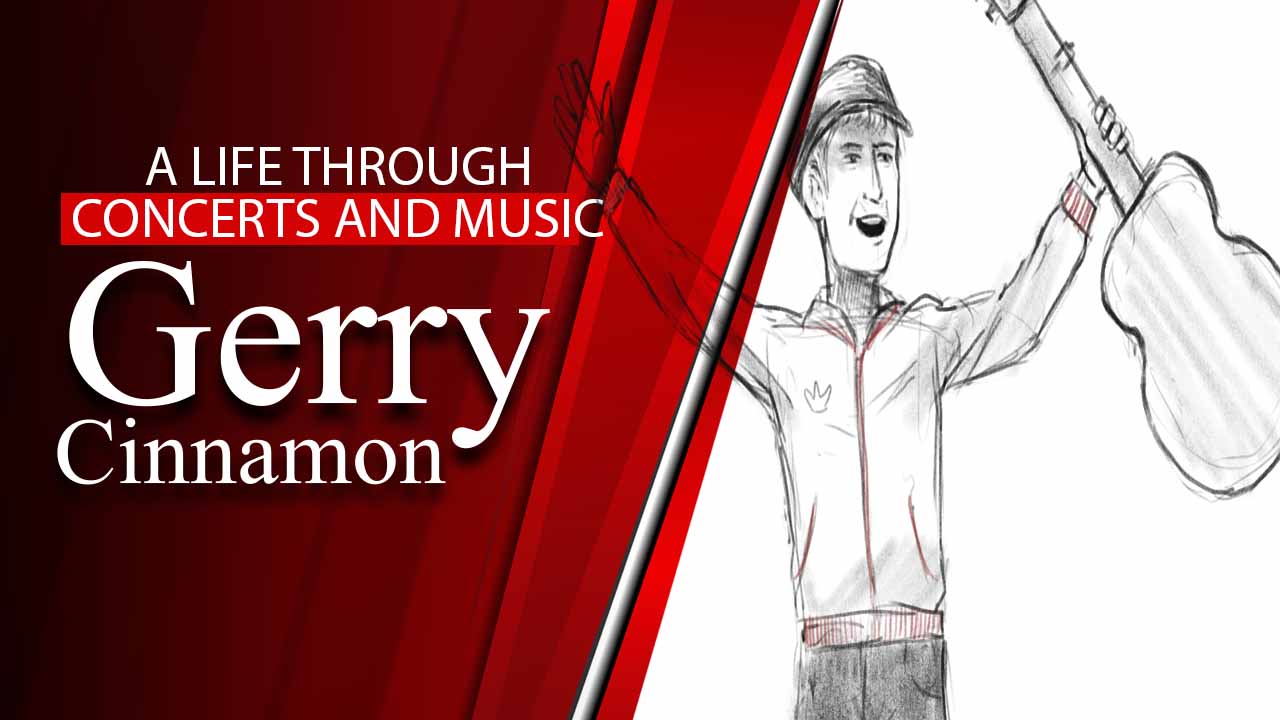 As a young teenager, Gerry Cinnamon felt the impact of not having a father strongly. Once during an interview with a Radio Station, he stated, “My life was f***ing mental growing up because I didn’t have a father.” He was frequently in problems since his adolescence. After finishing school, he labored as a plumber and later as a construction worker, neither of which he enjoyed. He tried his hand as a cook and even worked in a coffee shop before moving to London. This experiences, although unpleasant, would serve to guide him down the path to happiness and success he would find with music. He moved in with the father of a friend and had plenty of time there to learn the guitar. He did the move because of problems back home and wisely used this time to work on his music career which he began by learning instruments and also beginning a band called “The Cinnamons”. This enterprise would not last and he returned to Scotland to work as a solo singer.

Upon his return to Scotland, he began writing songs, and this blossoming passion in music proved to be a worthwhile endeavor in his several-year struggle to keep down a stable career. Around this time, he met an ambitious producer called Chris Marshall while doing a solo show at a college. They immediately began working on a regular schedule and eventually launched The Cinnamons, a lo-fi band. The band published a 5 song album in 2010. Gerry Cinnamon served as the lead songwriter and vocalist.

2017 The Release of Erratic Cinematic

Gerry Cinnamon first album Erratic Cinematic saw its release in 2017.  Gerry’s highly anticipated first album dubbed “Erratic Cinematic” beat out many industry great names at the top of the iTunes album ranking with little more for promotion than a social media post. The weight of his name and performances have started to speak for himself as we could all see with the release of his first album. His anthem lyrics, packed with social criticism, have captivated listeners throughout the country.

Each tune is unique and keeps the listener on their toes for a new riff or melodic lyrical display. Gerry has a talent of blowing the audience into a frenzy with loop pedal harmonies and booming kick drums, leaving them on a high and demanding more.

2019 Concert after Concert for Gerry Cinnamon

Cinnamon confirmed on May 7, 2019, that he would perform for Liam Gallagher at the Irish Independent Park in Cork on June 23, 2019. Having a packed schedule for the summer, Cinnamon would prepare to make new appearance in various shows.

Cinnamon performed on stage during Edinburgh’s Hogmanay street party in 2018/19. He performed two shows in Amsterdam in January 2019. His popularity and notoriety in the music world was starting to let itself be known to this multiple appearances in concerts throughout the season. He was named in February as one of the Friday main stage performers for the upcoming TRNSMT event in July, and he was also added to the list for numerous other summer festivals, including Benicàssim, Isle of Wight, Kendal Calling, Y Not, and Glastonbury Festival. His presence during this summer festivals would solidify his status as a hot and wanted artist and audiences would be pleased to see him perform at each different venue.

On July 12, it’s confirmed that he would be playing at the new P&J Live venue in Aberdeen on Saturday 23 November. Breaking the record for highest attendance at a Scottish indoor event with 15,000 people. He played two concerts at the SSE Hydro in his hometown of Glasgow on Friday 20 December. The arena tour expanded to include more locations in England and Ireland, with all 125,000 tickets selling out in advance. Cinnamon performed for Liam Gallagher on his Australian tour in December. His trek through Ireland and Great Britain would finalize for the summer, with many new concert venues being added to his tally and sold out performances following a rove of excited fans every time.

2020 The Bonny is released on a personal brand

Cinnamon stated on Twitter in November that his second album, The Bonny, will be launched on his own brand called
“Little Runaway” on April 17, 2020. His music career keeps adding accolades to its trophy list, with Cinnamon being the first Scottish performer to headline the 50,000 capacity concert house Hamden Park. Tickets went on sale on November 15, 2019, and were quickly sold out. Gerry Cinnamon was announced as the last performer for the Reading and Leeds festivals in August 2020 on 11 February 2020. Unfortunately, the concert was ultimately canceled due to the COVID-19 pandemic.

Cinnamon announced on May 21, 2020, that due to the coronavirus outbreak, he has postponed his UK and Ireland tour dates for May and June 2021. As a personal insight on the music industry, he has invited young musicians to believe in themselves despite a lack of money and first time support. He has also expressed a passionate dislike for the nature of the music industry marketing focus and the overplaying of inferior quality performers.

Stay tuned for more! We bring the latest and best from folk music and especially from Gerry Cinnamon!