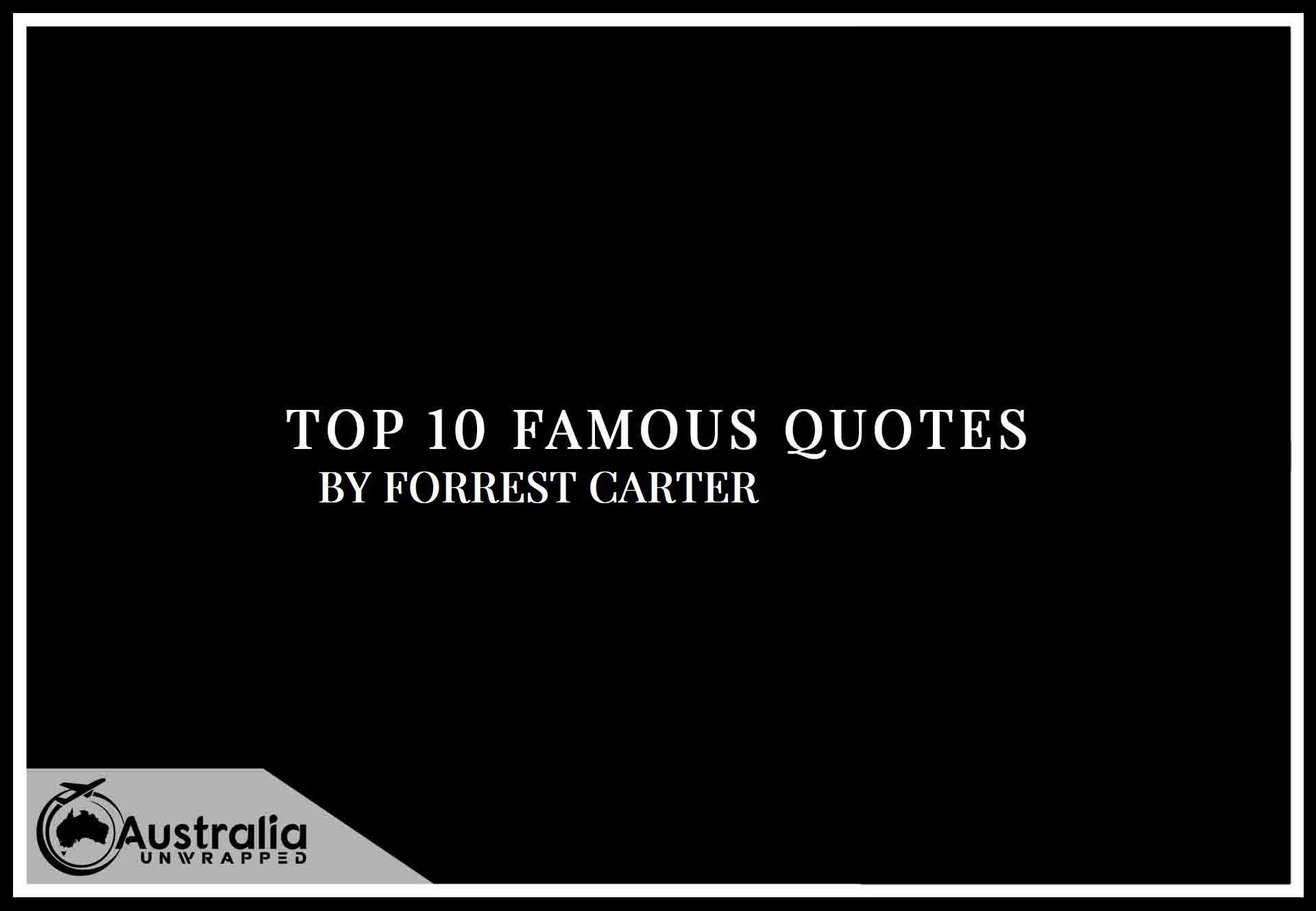 Forrest Carter, a writer whom I am guessing you love? Here are our 10 best Forrest Carter quotes for you to enjoy. At Australia Unwrapped we believe every book has at least one quotable line, and our mission is to find them all. Here you will find Forrest Carter’s top 10 popular and famous quotes. Like every good writer Forrest Carter made a number of memorable quotes, here are some of our favorites:

Forrest Carter was an American political speechwriter and author. Forrest Carter was best known for publishing novels and a best-selling, award-winning memoir under the name Cherokee. After his western The Rebel Outlaw: Josey Wales was published in 1976, The New York Times revealed Forrest Carter was Southerner Asa Earl Carter. In 1991, his purported memoir, The Education of Little Tree, topped both the nonfiction and fiction best-seller lists of the New York Times in paperback. The book was also recognized as the American Booksellers Book of the Year (ABBY).

Prior to his literary career as “Forrest”, Carter was politically active in Alabama as an opponent of the civil rights movement for years: as a speechwriter for segregationist Governor George Wallace of Alabama, he founded the North Alabama Citizens Council (NACC) and an independent Ku Klux Klan group; and he launched the Southerner, a publication that promoted segregation.

More from the Author: https://amzn.to/3T2QSKK

“Everything growing wild is a hundred times stronger than tame things.”
― Forrest Carter, The Education of Little Tree

“Then sometime there in late March, after the Indian violets had come, we would be gathering on the mountain and the wind, raw and mean, would change for just a second. It would touch your face as soft as a feather. It had an earth smell. You knew springtime was on the way.

The next day, or the next (you would commence to hold your face out for the feel), the soft touch would come again. It would last a little longer and be sweeter and smell stronger.”
― Forrest Carter, The Education of Little Tree

“Now remember, when things look bad and it looks like you’re not gonna make it, then you gotta get mean. I mean plumb, mad-dog mean. ‘Cause if you lose your head and you give up then you neither live nor win. That’s just the way it is.”
― Forrest Carter, The Outlaw Josey Wales

“Granpa said if there was less words, there wouldn’t be as much trouble in the world. He said privately to me that there was always some damn fool making up a word that served no purpose except to cause trouble.”
― Forrest Carter, The Education of Little Tree

“Grandma said […] when you come on something that is good, first thing to do is share it with whoever you can find; that way, the good spreads out to where no telling it will go.”
― Forrest Carter, The Education of Little Tree

“Granma said when you come on something good, first thing to do is share it with whoever you can find; that way, the good spreads out where no telling it will go. Which is right.”
― Forrest Carter, The Education of Little Tree

“He loves deep… hates hard, ever’thing’s that killed what he loves. All great warriors are sich men.”
― Forrest Carter, The Outlaw Josey Wales

“It is good that a man’s enemies want him dead, for it proves he has lived a life of worth.”
― Forrest Carter, The Outlaw Josey Wales

Quotes for all, here you found our selection of 10 Forrest Carter quotes. Make sure you help by commenting your best Forrest Carter quote below and sharing our favorite authors so we can look them up, read some of their works and give you the best quotes we can find. We hope you enjoyed our top 10 quotes by Forrest Carter. However, feel free to comment below if you disagree or would like to include some other great and memorable Forrest Carter quotes in our list.

“Granma said everybody has two minds. One of the minds has to do with the necessaries for body living. You had to use it to figure out how to get shelter and eating and such like for the body… She said we had to have that mind so as we could carry on. But she said we had another mind that had nothing atall to do with such. She said it was the spirit mind.

Granma said if you used the body-living mind to think greedy or mean; if you was always cuttin’ at folks with it and figuring how to material profit off’n them … then you would shrink up your spirit mind to a size no bigger ‘n a hickor’nut.

Granma said that when your body died, the body-living mind died with it, and if that’s the way you had thought all your life there you was, stuck with a hickor’nut spirit, as the spirit mind was all that lived when everything else died…

Granma said that the spirit mind was like any other muscle. If you used it it got bigger and stronger. She said the only way it could get that way was using it to understand, but you couldn’t open the door to it until you quit being greedy and such with your body mind. Then understanding commenced to take up, and the more you tried to understand, the bigger it got.

Natural, she said, understanding and love was the same thing; except folks went at it back’ards too many times, trying to pretend they loved things when they didn’t understand them. Which can’t be done.

I see right out that I was going to commence trying to understand practical everybody, for I sure didn’t want to come up with a hickor’nut spirit.”
― Forrest Carter, The Education of Little Tree

More from the Author: https://amzn.to/3T2QSKK