Foods to Avoid When Pregnant? 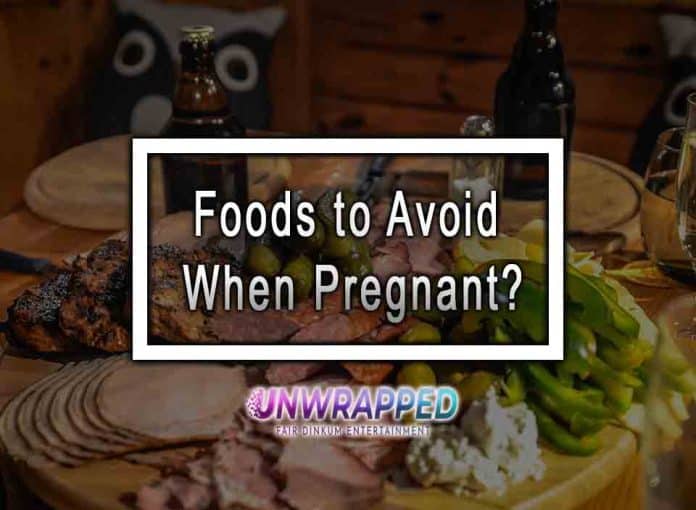 Foods to Avoid During Pregnant: May Cause Bad Result

Pregnancy is a wonderful time for expecting mothers and their partners. However, it can also be a stressful time as well: how much exercise should you do? How much caffeine is too much? What foods are safe to eat while pregnant and which ones are not? The following list of foods to avoid when pregnant will help guide you through these questions and others so that your pregnancy is full of joy, not worry.

There are certain foods to avoid when pregnant, as they can pose a health risk to both the mother and the developing fetus. In this article, we will list some of the most common foods to avoid during pregnancy.

Stay Sane: Can You Take Nurofen When Pregnant?

Foods to Avoid When Pregnant

There are a lot of different things to consider when you are pregnant. From what you eat, to how much you exercise, to what medications you take, everything can affect your baby. One of the most important things to think about when you are pregnant is what foods to avoid. Some foods can be harmful to your baby, and it is important to know which ones to stay away from.

You should be extra careful of the food you eat when pregnant. Some foods are considered to be dangerous for your baby and some others can cause harm to you as well. The following are some of the things that you should avoid during pregnancy:

Seafood contains mercury, which is a neurotoxin that can cause brain damage in infants. This means you should avoid eating raw fish, sushi and the like.

You should also avoid eating raw shellfish, clams, mussels, oysters and scallops, as well as raw crab or squid. Avoid fish and shellfish that contain high levels of mercury, such as shark, swordfish and king mackerel.

Eat fish and shellfish with lower levels of mercury instead. These include salmon, shrimp, pollock and catfish.

When it comes to raw meat and poultry, you have to be careful. Undercooked meat can contain a number of bacteria that can cause food poisoning, and pregnant women are especially susceptible to this condition. Raw meat is more likely than cooked meat to harbor bacteria such as E. coli and listeria, so it’s important that you cook all your meats thoroughly before eating them. Cooked food should reach at least 71 degrees Celsius, which will kill any harmful bacteria lurking in the meat or poultry.

Soft cheese is made with unpasteurized milk. If you’re pregnant, it’s best to avoid soft cheeses like Brie, Camembert and Feta, as they can contain listeria a bacteria that can cause infections in the mother and her baby.

Soft cheeses may also cause food poisoning or miscarriage. If you do eat soft cheese while pregnant, make sure it has been pasteurized before eating it; look for labels on packaging.

Processed meats are the most common culprit for food-borne illnesses. They include bacon, sausage, salami and hot dogs. Processed meats are high in sodium and fat and may contain nitrates or antibiotics. The USDA recommends that pregnant women avoid eating processed meat altogether because it can cause listeria infections which can lead to miscarriage or stillbirth.

Eggs are a good source of protein, vitamins, and omega-3 fatty acids. However, they can also contain salmonella bacteria that causes food poisoning. If you’re pregnant or planning to become pregnant soon, you should avoid eating raw eggs altogether. Pregnant women are more likely than other adults to get sick from salmonella because they have weakened immune systems during pregnancy.

Unpasteurized milk has a greater risk of carrying listeria, toxoplasmosis, salmonella and E. coli, a type of bacteria. If you are pregnant, it is especially important to avoid these because they can cause miscarriage or birth defects in your baby.

Caffeine is a stimulant that can cross the placenta and increase your baby’s heart rate. It’s also a diuretic, which means it can make you have to urinate more often. Too much caffeine can lead to dehydration, which is not good for you or your baby.

A few cups of coffee here and there is probably fine but if you’re drinking four or more cups a day, it may be best to cut back so that both you and your baby are safe from any potential harm caused by too much caffeine intake during pregnancy

When you’re pregnant, it’s important to follow the recommended guidelines for alcohol intake. Drinking during pregnancy can cause birth defects, miscarriage and stillbirth. The effects of drinking in pregnancy vary depending on how much alcohol a woman consumes. The more she drinks, the greater the risk of harm to her baby.

Drinking early in pregnancy may increase your chances of having a miscarriage or stillbirth by up to 80%. It can also cause your baby to have an increased risk of:

Raw flour is a common ingredient in baked goods and other foods. It contains a parasite called toxoplasma gondii, which can cause health problems for pregnant women and their babies.

The Centers for Disease Control has warned pregnant women to avoid eating raw flour because it may contain Toxoplasma gondii, a parasite that can cause toxoplasmosis. According to the CDC, toxoplasmosis can lead to serious birth defects if a woman becomes infected while she’s pregnant or develops an acute case of the disease while she is breastfeeding.

Deli meat is a good source of protein, but it can also be high in sodium and therefore unhealthy for you. We recommend that you avoid deli meat if you’re pregnant, especially if you have certain risk factors such as hypertension or diabetes. Deli meats are processed foods, which means they may contain listeria, e-coli, or other harmful bacteria.

You might be surprised to see raw sprouts on this list, but they can carry bacteria. Sprouts are a good source of protein, vitamins and minerals for pregnant women. However, it’s best to avoid them due to the risk of food poisoning and listeria. Listeriosis is an infection caused by the bacterium Listeria monocytogenes (Lm).

Reasons Why Food You Eat During Pregnancy Matters

If you’re pregnant, you know that you need to eat well for the health of your developing baby. But what does “eating well” mean? It’s not just about loading up on fruits and veggies   although that’s good advice. No, what it comes down to is eating a balanced diet full of more nutritious foods. It also means avoiding certain foods that can be harmful to your fetus throughout this important time in your life.

It Affects the Health of The Baby

While you’re pregnant, your baby is still growing and developing. As a result, your diet can affect the health of your baby.

The same goes for bitter flavors; if you avoid bitter foods such as coffee and citrus fruits while pregnant, your child may grow up to prefer them over sweeter alternatives. Because these early experiences are so important, it’s important to make sure that your diet is right during pregnancy: try not to eat too much processed food or drink too many soft drinks and if possible, try making some healthier choices instead.

It Can Affect Your Baby’s Weight Later in Its Life

As you know, infants and children are more prone to obesity than adults. This makes sense from a physiological standpoint: there’s no need for them to be as lean as we are because they don’t do the same amount of physical activity that we do on a daily basis. However, it’s important to keep in mind that diet during pregnancy can affect your child’s weight later in life.

Your baby is just like a sponge when it comes to absorbing nutrients from their environment, so if you’re eating healthy foods during this time and leading by example, chances are high that your child will have similar tastes when they grow up.

It Affects Your Own Health, Too

One of the main reasons why you should eat well during pregnancy is that it can improve your health. Eating well while pregnant is helpful in preventing complications, such as pre-term labor, gestational diabetes and high blood pressure. Additionally, eating well can help you avoid anemia by providing the necessary nutrients and proteins needed for a healthy pregnancy.

While you’re eating well during pregnancy, it’s important to remember that you can still enjoy the foods you love. You can find healthy options at restaurants or grocery stores and farmers markets. Eating out is a great way to get some variety in your diet while pregnant. Just make sure you have time to look over the menu before going out so that you know what healthy choices are available to order.

If your schedule doesn’t allow enough time for cooking several times per week, try freezing batches of homemade soup or hearty soups with beans to have on hand when needed. Or, if your work requires frequent travel, pack snacks like trail mix, nuts and dried fruit in separate containers into individual bags so they don’t get crushed in transit or mix together when stored together in one container at home before leaving on a trip.

There are many health benefits to eating a diet rich in fruits and vegetables during pregnancy. For example, these foods contain vitamins that help promote your baby’s brain development and provide protection against diseases like asthma, diabetes and childhood leukemia. Eating well can also reduce the risk for developing gestational diabetes, preeclampsia and other complications related to blood sugar control during pregnancy.

As you can see, the list of foods to avoid when pregnant is a long one. There are many different reasons why some foods are not recommended for pregnant women. Some have been found to have harmful bacteria or chemicals in them that could potentially harm your baby’s health, while others may contain high levels of mercury or other contaminants which can increase your risk of developing certain illnesses like cancer later on in life. We hope this article has helped answer any questions you had about what types of food might make it unsafe for them to eat during pregnancy.

Read This: Can You Take Panadol When Pregnant?

Stay Connected
52,619FansLike
5,673FollowersFollow
829FollowersFollow
Previous articleCan You Take Panadol When Pregnant: Good or Bad?
Next articleHow Many Days After Ovulation Can You Get Pregnant?