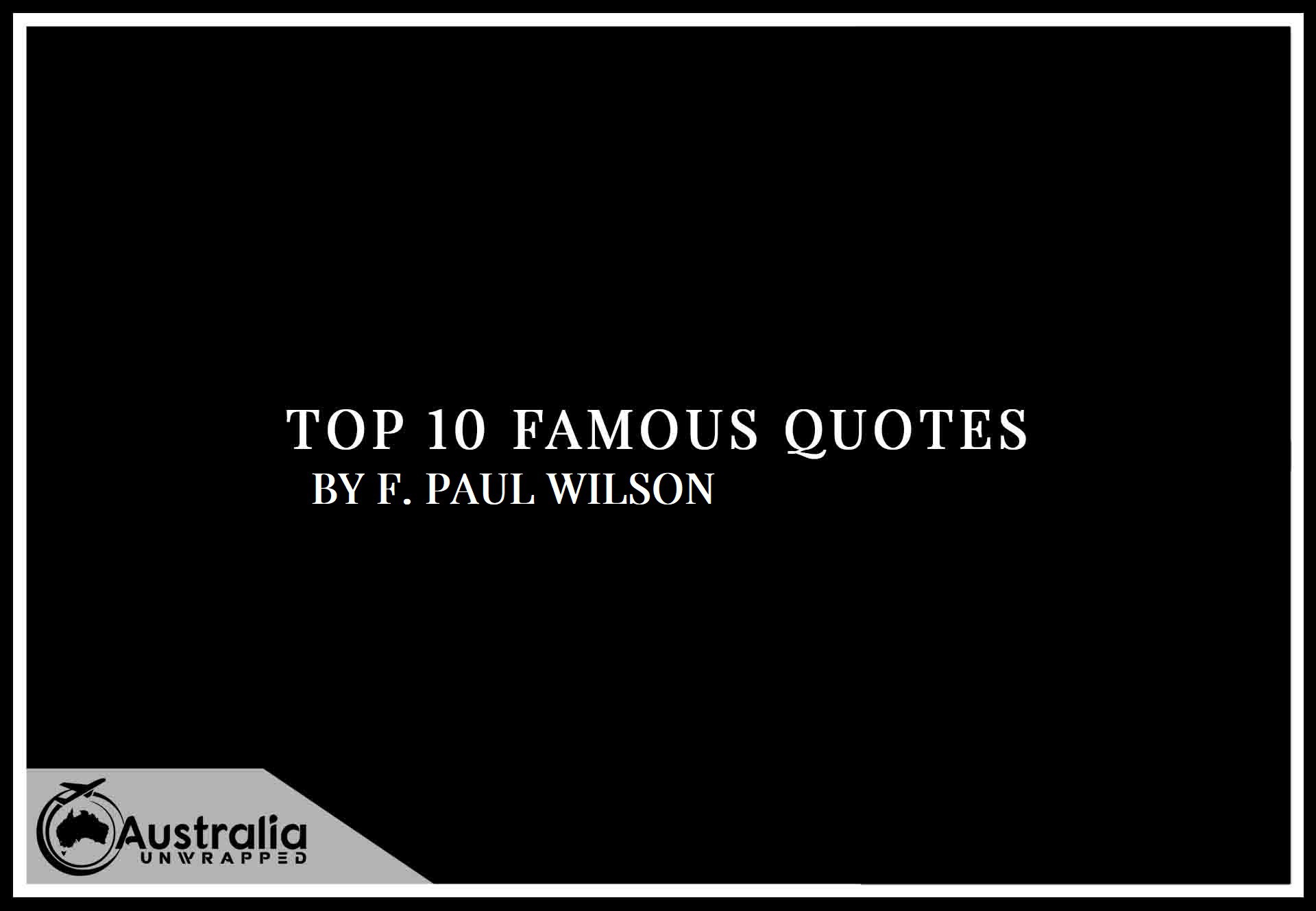 F. Paul Wilson, a writer whom I am guessing you love? Here are our 10 best F. Paul Wilson quotes for you to enjoy. At Australia Unwrapped we believe every book has at least one quotable line, and our mission is to find them all. Here you will find F. Paul Wilson’s top 10 popular and famous quotes. Like every good writer F. Paul Wilson made a number of memorable quotes, here are some of our favorites:

The author, Francis Paul Wilson, was born in Jersey City, New Jersey. Mostly he writes science fiction and horror novels and short stories. The first novel he wrote was Healer (1976). He is also a part-time practicing family physician. The first sales he made to Analog were in 1970, and he continued to write science fiction throughout the 1970s. During the 1980s, he helped define the horror genre with the international bestseller, The Keep. From science fiction to horror to medical thrillers in the 1990s, he branched into interactive scripting for Disney Interactive and other multimedia companies. During 1992-1996, he and Matthew J. Costello created and scripted FTL Newsfeed, which aired daily on the Sci-Fi Channel.

More from the Author: https://amzn.to/3AhX35a

“There must be no bloodshed, no violence unless it is defensive, no coercion! We must do it our way and our way alone! To do otherwise is to betray centuries of hardship and struggle.

Above all else Kyfho. Forget Kyfho in your pursuit of victory over the enemy, and you will become the enemy…worse than the enemy because he doesn’t know he is capable of anything better.”
― F. Paul Wilson, An Enemy of the State

“The acronym was derived from the title of the first book–a pamphlet, really– in which Khyfo was expounded, a supposedly scatalogical phase that meant ‘Don’t Touch’…

The title was Keep Your Fucking Hands Off. Mean anything to you?

Nor to me. But it supposedly summed up their philosophy pretty well at the time.”
― F. Paul Wilson, An Enemy of the State

“Can a man who lies, cheats, steals, and sometimes does violence to other people be a man of honor?
Kolabati looked into his eyes. “He can if he lies to liars, cheats cheaters, steals from thieves, and limits his violence to those who are violent.”
― F. Paul Wilson

“Your believing or not believing in karma has no effect on its existence, nor on its consequences to you. Just as a refusal to believe in the ocean would not prevent you from drowning.”
― F. Paul Wilson, The Tomb

“If you come to a fight thinking it will be a fair one, you didn’t come prepared.”
― F. Paul Wilson

“Reality is what trips you up when you walk around with your eyes closed.”
― F. Paul Wilson, Healer

“War, hate, jealousy, racism – what are they but manifestations of fear?”
― F. Paul Wilson, Reprisal

“Jesus paid for our sins, so let’s get our money’s worth.”
― F. Paul Wilson, Conspiracies

Quotes for all, here you found our selection of 10 F. Paul Wilson quotes. Make sure you help by commenting your best F. Paul Wilson quote below and sharing our favorite authors so we can look them up, read some of their works and give you the best quotes we can find. We hope you enjoyed our top 10 quotes by F. Paul Wilson. However, feel free to comment below if you disagree or would like to include some other great and memorable F. Paul Wilson quotes in our list.

“He isn’t a government or an army. He’s a guy. No matter what you think of any particular war, you’ve got to feel something for some poor guy ripped out of his life and handed a gun and sent somewhere to kill other guys who’ve been ripped out of their lives and sent to do the same thing, and while they’re both shivering in their foxholes, scared they’re not going to see another sunrise, all the fat cats, all the generals and politicos and priests and mullahs and tribal elders who started the whole damn thing, sit way to the rear, moving their chess pieces around.” He jerked a thumb over his shoulder as he took a breath. “He got handed the dirty end of a dirty stick but he handled it. You’ve got to respect that.”
― F. Paul Wilson, All the Rage

More from the Author: https://amzn.to/3AhX35a