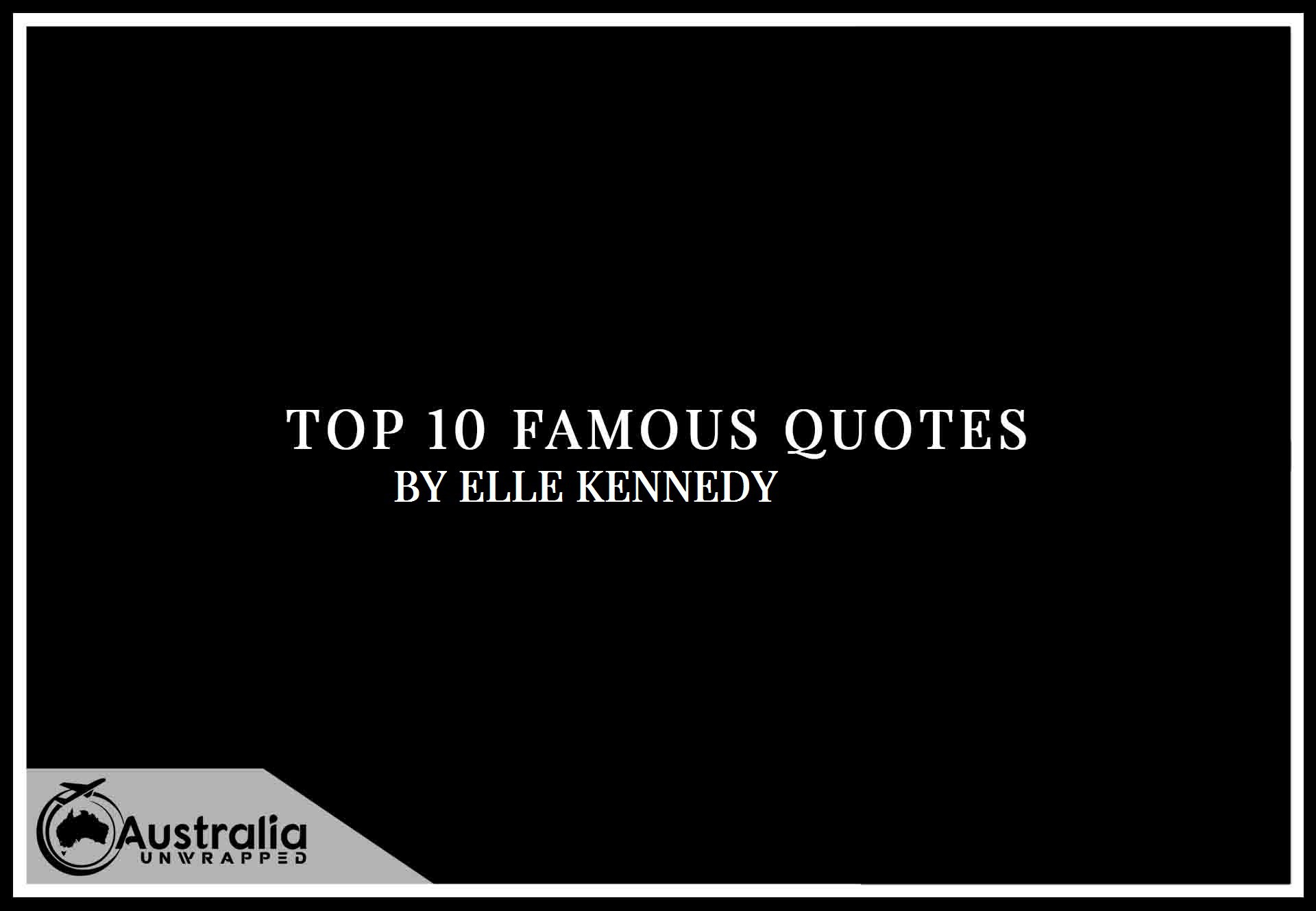 Love reading? Then it’s likely you will love a good quote from your favourite author. This article covers Elle Kennedy’s Top 10 Popular and Famous Quotes that we at Australia Unwrapped have collected from some of his greatest works. Elle Kennedy quotes to remember and here you will find 10 of the best. A memorable quote can stay with you and can be used along your journey. Choosing Elle Kennedy’s top 10 quotes is not easy, but here they are:

“Seriously, just find yourself a rebound.” Dean whips up his arm. “I volunteer as tribute.”
― Elle Kennedy, The Score

“Him: Confession: I deleted all the 1 Direction from your iPod when u were in the can.
You’re welcome.
Me: WHAT?? I’m going to kiss u!
Him: With tongue?
It takes me a second to realize what happened, at which point I’m completely mortified.
Me: Kill u! I meant KILL. u. Damn autocorrect.
Him: Surrrrrre. Let’s blame it on autocorrect.
Me: Shut it.
Him: I think someone wants to kiss me…”
― Elle Kennedy, The Deal

“You know, I don’t think we’re dealing with a Bella’s-magical-blood situation here.”
“No?”
“No. I think you’ve imprinted on this girl’s pussy.”
… “What do you mean?”
“I mean you’re facing a Jacob quandary. You imprinted on her pussy, and now it’s the only pussy you can think about. You exist solely for this pussy. Like Jacob and that weird mutant baby.”
― Elle Kennedy, The Score

“Just out of curiosity,” she says, “after you wake up in the morning, do you admire yourself in the mirror for one hour or two?”

“Do you high five yourself?”

“Of course not.” I smirk. “I kiss each of my biceps and then point to the ceiling and thank the big man upstairs for creating such a perfect male specimen.”
― Elle Kennedy, The Deal

“She tries to take a step down the hall, but I tug on her hand and kiss her again, and this time it’s not a peck. I kiss her hard, losing myself in her taste and her heat and every damn thing about her. I never expected her. Sometimes people sneak up on you and suddenly you don’t know you ever lived without them.”
― Elle Kennedy, The Deal

“How did I go so long without noticing you, damn it? Why did it take seeing a stupid A on your midterm to make me notice?”
He sounds so genuinely upset that I scoot closer and kiss him. “It doesn’t matter. You know me now.”
“I do,” he says fiercely.”
― Elle Kennedy, The Deal

“I’m comfortable enough with my hetero status to say that if I did play for the other team? I wouldn’t just fuck Garrett Graham, I’d marry him.”
― Elle Kennedy, The Mistake

“I fight back laughter.

“Did you really just Princess Bride me?”

“Did you really just use Princess Bride as a verb?”
― Elle Kennedy, The Deal

“Sometimes people sneak up on you and suddenly you don’t know how you ever lived without them.”
― Elle Kennedy, The Deal

“The second I encounter his erection, my jaw drops.
“Oh my God, are you kidding me?”
He looks startled. “What’s wrong?”
“Are you taking human growth hormones or something? I snatch my hand back, fighting another rush of nervousness. “There’s no way that huge man monster is fitting inside me!”
Garrett’s head abruptly drops in the crook of his arm as a shudder racks his body. At first I think he’s pissed off. Or maybe even crying. It takes several seconds before I realize what’s happening. He’s laughing.
Scratch that – he’s in hysterics.”