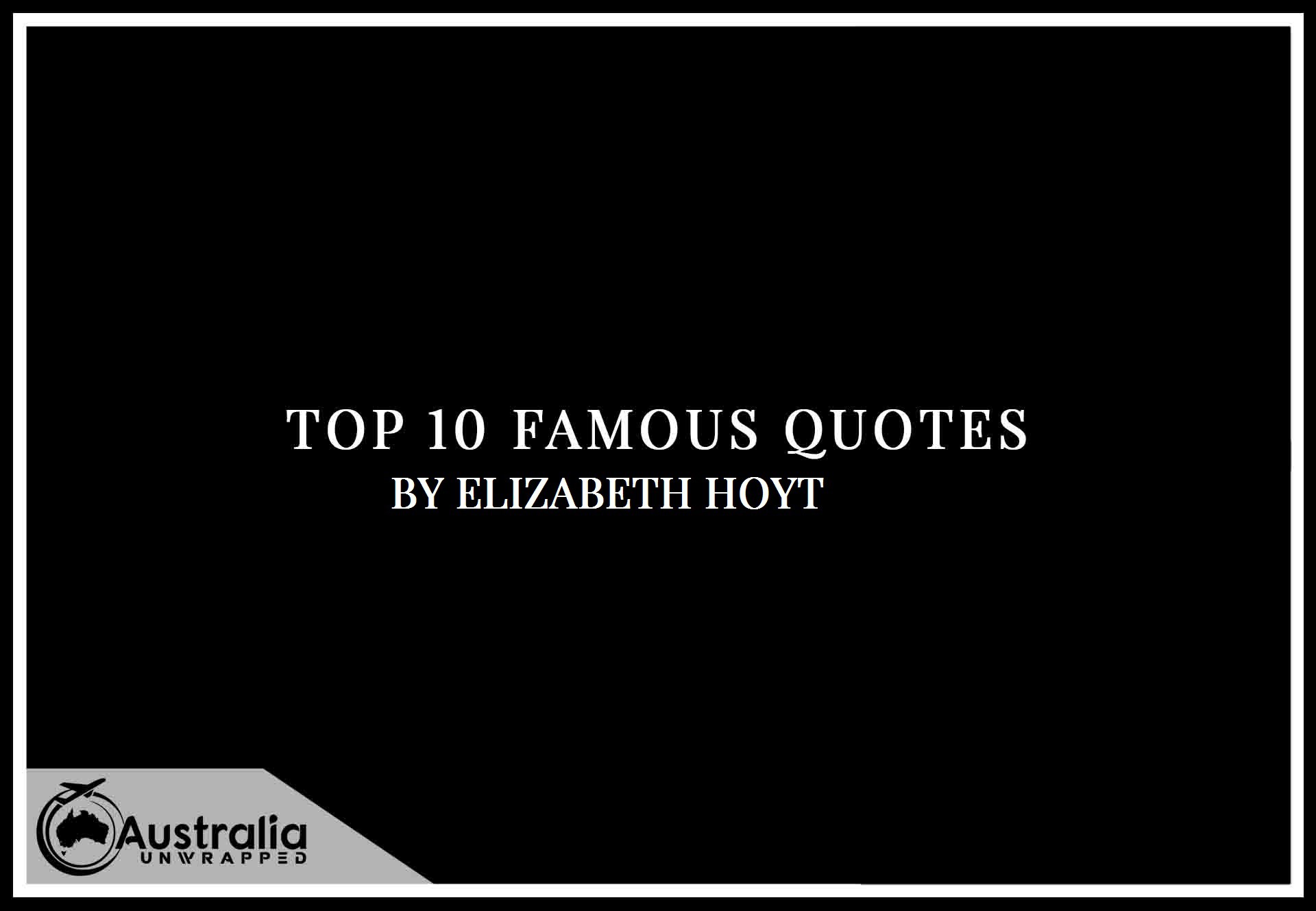 Quotes, who doesn’t love a good quote? This series of articles we look at Top 10 Famous Quotes by Author Elizabeth Hoyt, author quotes are always a challenge and fun to pick, with Elizabeth Hoyt you will find my Ten favourites of Elizabeth Hoyt’s quotes.

“But he place a gentle palm under her chin and turned her face back to him. “I’m privileged to see you like this,” he said, his eyes fierce. “Wear you social mask at your balls and parties and when you visit your friends out there, but when we are alone, just the two of us in here, promise me this: that you’ll show me only your real face, no matter how ugly you might think it. That’s our true intimacy, not sex, but the ability to be ourselves when we are together. (Winter Makepeace)”
― Elizabeth Hoyt, Thief of Shadows

“Why?” he whispered as he leaned over her, supported on one arm. “Why must ye be the one that haunts me dreams? I’ve seen ye weepin’ night after bloody night since the day I sent ye from me palace with yer dress half undone. If I had it to do over again, I’d cut me own right hand off rather than hurt ye so. Will ye never be able to forgive me, Silence love?”

“I already have,” she replied, cradling his cheek in her hand. “Long, long ago.”
― Elizabeth Hoyt, Scandalous Desires

“I love you,” she sobbed, rubbing her hands over his face, his hair, his chest, making sure he was solid and real. “I love you, and I thought you were dead. I couldn’t bear it. I thought I would die too.”

“It was a strange thing, this feeling of empathy. He’d never experienced it before. He realized that what hurt this woman hurt him as well, that what made her bleed caused a hemorrhage of pain within his soul.”
― Elizabeth Hoyt, Wicked Intentions

“You say my name like a lover, so soft, so sweet. I want to lick the word from your lips, sip the exhaled breath from your mouth. I want to possess you utterly. Right now. Right here.”
― Elizabeth Hoyt, Notorious Pleasures

His face blanked for a second before it cleared. He glanced at the dog in consideration. ‘I don’t think so. He would outrank me.”
― Elizabeth Hoyt, The Raven Prince

“There’s something about her,” Caire said in a low voice. “She cares for everyone about her, yet neglects herself. I want to be the one who cares for her.”
― Elizabeth Hoyt, Wicked Intentions

“There are no heroes on the battlefield, my lady; there are only survivors.”
― Elizabeth Hoyt, To Taste Temptation

“Every word you have ever uttered, is engraved upon my heart.”
― Elizabeth Hoyt, Wicked Intentions

“Where are we going?” she asked.

“Mr. Durbin’s sheep have begun to lamb, and I wanted to see how the ewes are doing.” He cleared his throat. “I suppose I should have told you about today’s outing earlier.”

Anna kept her eyes straight ahead and made a noncommittal sound.

He coughed. “I might’ve, had you not left so precipitously yesterday afternoon.”

She arched a brow but did not reply.

There was a lengthy lull broken only by the dog’s eager yelp as he flushed a rabbit from the hedge along the lane.

Then the earl tried again. “I’ve heard some people say my temper is rather . . .” He paused, apparently searching for a word.

He squinted at her.

He frowned and opened his mouth.

She was quicker. “Barbaric?”

He cut her off before she could add to her list. “Yes, well, let us simply say that it intimidates some people.” He hesitated. “I wouldn’t want to intimidate you, Mrs. Wren.”