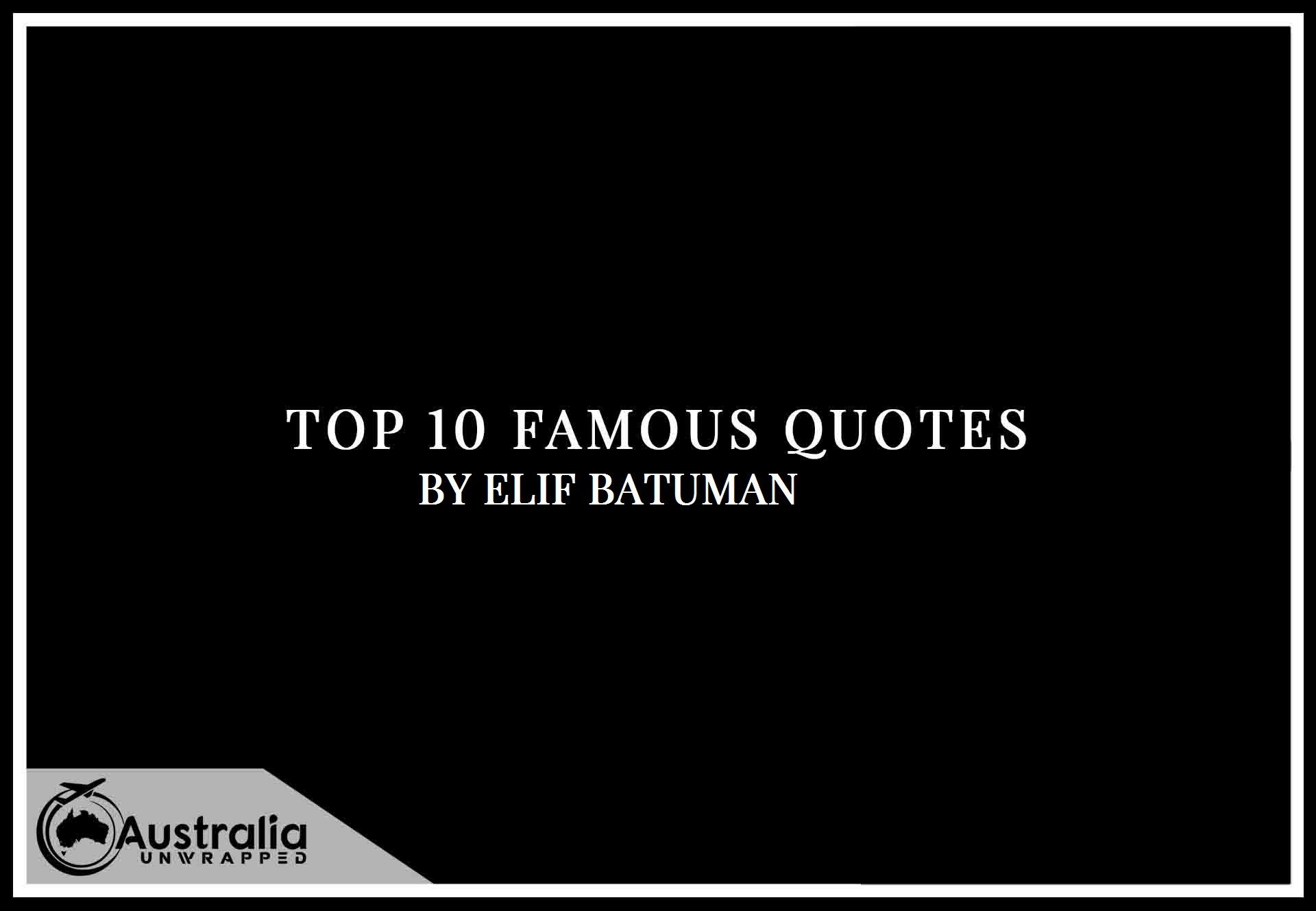 Quotes, who doesn’t love a good quote? This series of articles we look at Top 10 Famous Quotes by Author Elif Batuman, author quotes are always a challenge and fun to pick, with Elif Batuman you will find my Ten favorites of Elif Batuman’s quotes.

American author, academic, and journalist Elif Batuman. She was born in New York City to Turkish parents and grew up in New Jersey. She graduated from Harvard College and earned her doctorate in comparative literature from Stanford University.

Currently, Batuman is the writer-in-residence at Koç University. She studied Uzbek in Samarkand, Uzbekistan, while in graduate school. In her dissertation titled, “The Windmill and the Giant: Double-Entry Bookkeeping in the Novel,” she examines the process of social research and solitary construction undertaken by novelists. She was awarded a Rona Jaffe Foundation Writers’ Award in 2007. She published her first book, The Possessed: Adventures with Russian Books and the People Who Read Them, in February 2010.

Also, she has published pieces in The New Yorker, Harper’s Magazine, and n+1. In her writing, she uses almost helplessly epigrammatical language. She lives in Twin Peaks, California.

More from the Author: https://amzn.to/3QDS71f

“A few times I saw a chicken walking around importantly, like some kind of a regional manager.”
― Elif Batuman, The Idiot

“Most people, the minute they meet you, were sizing you up for some competition for resources. It was as if everyone lived in fear of a shipwreck, where only so many people would fit on the lifeboat, and they were constantly trying to stake out their property and identify dispensable people – people they could get rid of…. Everyone is trying to reassure themselves: I’m not going to get kicked off the boat, they are. They’re always separating people into two groups, allies and dispensable people… The number of people who want to understand what you’re like instead of trying to figure out whether you get to stay on the boat – it’s really limited.”
― Elif Batuman, The Idiot

“I found myself remembering the day in kindergarten when the teachers showed us Dumbo, and I realized for the first time that all the kids in the class, even the bullies, rooted for Dumbo, against Dumbo’s tormentors. Invariably they laughed and cheered, both when Dumbo succeeded and when bad things happened to his enemies. But they’re you, I thought to myself. How did they not know? They didn’t know. It was astounding, an astounding truth. Everyone thought they were Dumbo.”
― Elif Batuman, The Idiot

“It was hard to decide on a literature course. Everything the professors said seemed to be somehow beside the point. You wanted to know why Anna had to die, and instead they told you that 19th century Russian landowners felt conflicted about whether they were really a part of Europe. The implication was that it was somehow naive to want to talk about anything interesting, or to think that you would ever know anything important.”
― Elif Batuman, The Idiot

“I kept thinking about the uneven quality of time–the way it was almost always so empty, and then with no warning came a few days that felt so dense and alive and real that it seemed indisputable that that was what life was, that its real nature had finally been revealed. But then time passed and unthinkably grew dead again, and it turned out that that fullness had been an aberration and might never come back.”
― Elif Batuman, The Idiot

“Your atom, I think it will never go back to peace, to cereal or rocks or anything like that. Once it has been seduced there is no way back, the way is always ahead, and it is so much harder after the passage from innocence. But it does not work to pretend to be innocent anymore. That seduced atom has energies that seduce people, and those rarely get lost.”
― Elif Batuman, The Idiot

“Even though I had a deep conviction that I was good at writing, and that in some way I already was a writer, this conviction was completely independent of my having ever written anything, or being able to imagine ever writing anything, that I thought anyone would like to read.”
― Elif Batuman, The Idiot

“It can be really exasperating to look back at your past. What’s the matter with you? I want to ask her, my younger self, shaking her shoulder. If I did that, she would probably cry. Maybe I would cry, too.”
― Elif Batuman, The Idiot

“I didn’t care about truth; I cared about beauty. It took me many years–it took the experience of lived time–to realize that they really are the same thing.”
― Elif Batuman, The Possessed: Adventures With Russian Books and the People Who Read Them

“An amazing sight, someone you’re infatuated with trying to fish something out of a jeans pocket.”
― Elif Batuman, The Idiot

“In my heart, I knew that Whorf was right. I knew I thought differently in Turkish and English – not because thought and language were the same, but because different languages forced you to think about different things. Turkish, for example, had a suffix, -mis, that you put on verbs to report anything you didn’t witness personally. You were always stating your degree of subjectivity. You were always thinking about it, every time you opened your mouth.

The suffix -mis had not exact English equivalent. It could be translated as “it seems” or “I heard” or “apparently.” I associated it with Dilek, my cousin on my father’s side – tiny, skinny, dark-complexioned Dilek, who was my age but so much smaller. “You complained-mis to your mother,” Dilek would tell me in her quiet, precise voice. “The dog scared-mis you.” “You told-mis your parents that if Aunt Hulya came to America, she could live in your garage.” When you heard -mis, you knew that you had been invoked in your absence – not just you but your hypocrisy, cowardice, and lack of generosity. Every time I heard -mis, I felt caught out. I was scared of the dogs. I did complain to my mother, often. The -mis tense was one of the things I complained to my mother about. My mother thought it was funny.”

More from the Author: https://amzn.to/3QDS71f