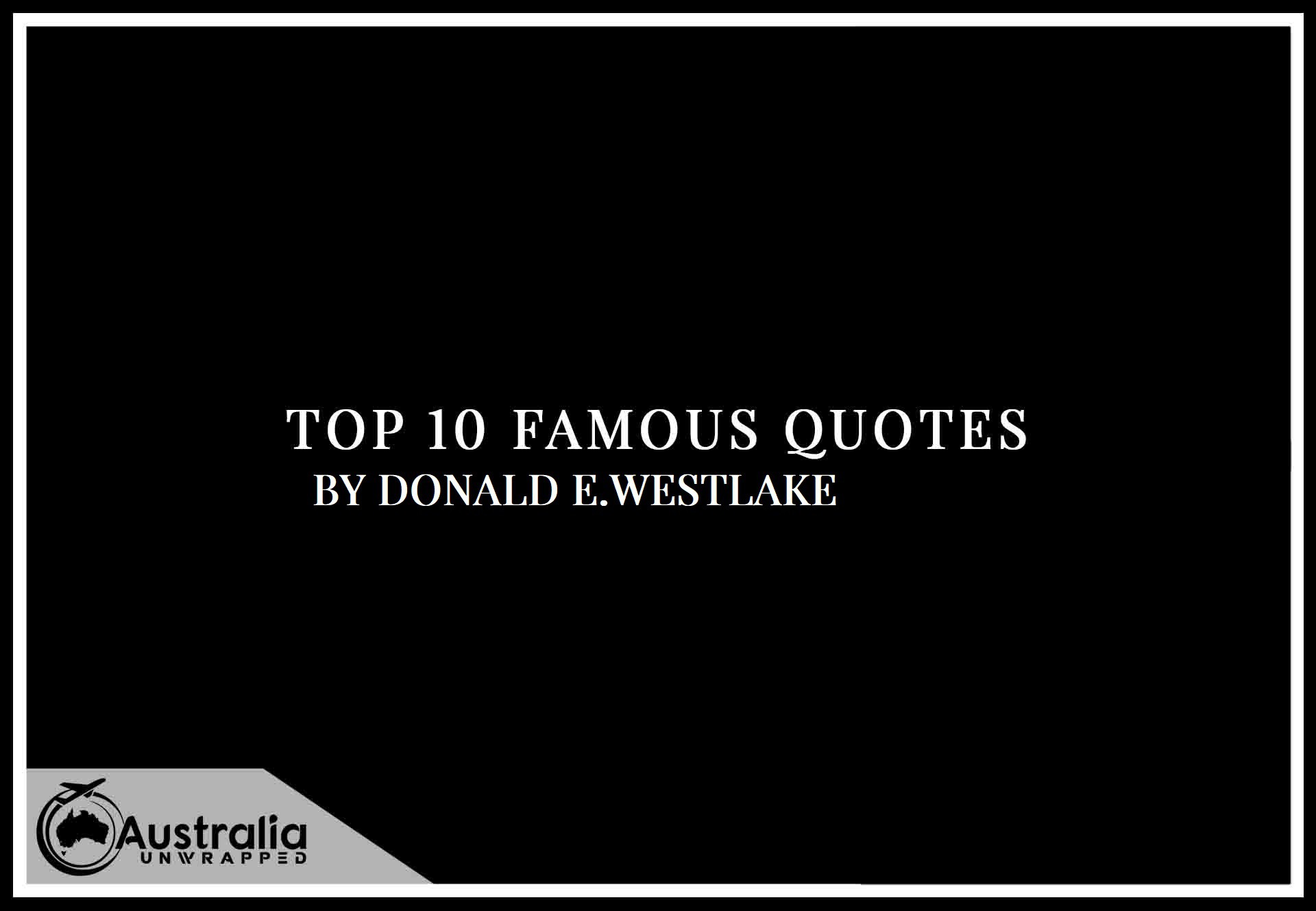 Donald E. Westlake, a writer whom I am guessing you love? Here are our 10 best Donald E. Westlake quotes for you to enjoy. At Australia Unwrapped we believe every book has at least one quotable line, and our mission is to find them all. Here you will find Donald E. Westlake’s top 10 popular and famous quotes. Like every good writer Donald E. Westlake made a number of memorable quotes, here are some of our favorites:

American crime fiction author Donald E. Westlake (1933-2008) was prolific and talented. In the late 1950’s, he began writing novels for pulp houses under various pseudonyms, including Richard Stark, but soon began publishing under his own name. His most famous characters were John Dortmunder, an unlucky thief, and Parker, a ruthless criminal. God Save the Mark won the 1968 Best Novel award, Too Many Crooks won the 1990 Best Short Story award, and The Grifters won the 1991 Best Motion Picture Screenplay award. In 1993, Westlake also received a Grand Master Award from the Mystery Writers of America.

More from the Author: https://amzn.to/3wug6bd

“His eyes were eggy with blue yolks.”
― Donald Westlake

“(Novelists, when their characters drive cars, never feel compelled to describe precisely what the physical actions are of hands, feet, eyes, knees, elbows. Yet many of these same novelists, when their characters copulate, get into such detailed physical description you’d think they were writing an exercise book. We all know the interrelation between the right ankle and the accelerator when driving a car, and we needn’t be told.”
― Donald E. Westlake, Dancing Aztecs

“Two solid weeks of beautiful weather. Clear sunny days, low humidity, temperature in the seventies, air so brisk and clean you could read E PLURIBUS UNUM on a dime across the street. Clear cloudless nights, temperature in the fifties, the sky a great soft raven’s breast, an immense bowl of octopus ink salted with a million hard white crystalline stars and garnished with a huge moon pulsing with white light. It was disgusting.”
― Donald E. Westlake, Drowned Hopes

“A lady doctor in the foreground, black horn-rims and white lab coat, suddenly cried, “You people ought to be ashamed of yourselves! Do you realize what you’re doing to the reality concepts we’re trying to instill in these people? How do you expect them to differentiate between illusion and reality when you do something like this?””
― Donald E. Westlake, The Hot Rock

“It was apparent…that, all over America, thousands of people threw down a book or got up from a television show and said, ‘I can write better than that!’ It was amazing how many of them were wrong.”
― Donald E. Westlake, Dancing Aztecs

“What advice I would give to anybody about anything. Life is a slow-motion avalanche, and none of us are steering.” (When asked in an interview about what question he’s tired of being asked.)”
― Donald E. Westlake

“Nobody gets everything in this life. You decide your priorities and you make your choices. I’d decided long ago that any cake I had would be eaten.”
― Donald E. Westlake, Two Much

“My mother believed in all superstitions, plus she made some up.”
― Donald E. Westlake

“Story ideas had never been a problem for him, there’d always been more ideas than time to write them, he’d reject one perfectly good notion because he fell more simpatico toward a different one. But of course he could never go back to any of those ancient story stubs, they wouldn’t still have juice in them.

For him, creating a novel was like gardening; you choose your seed, you treat it exactly the way the package says, and gradually a thing of beauty – or of sturdiness, or of nutrition – grows up and becomes yours. The seed you don’t nurture doesn’t wait to be doted over later; it shrivels and dies.”
― Donald E. Westlake, The Hook

More from the Author: https://amzn.to/3wug6bd