Does Australia Have all Four Seasons? 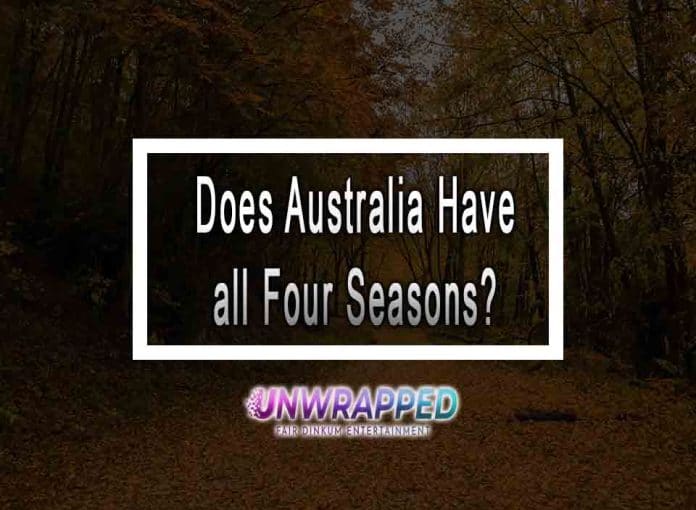 Australia is a four-season country. However, Australia’s seasons are opposites to the seasons in the Northern Hemisphere. You can experience summer around December to February; Autumn from March to May; winter from June to August; and Spring from September to November.

Four seasons across most of Australia

Despite having four seasons across most of Australia, there are still parts of the country that experience a wet season around November to April and a dry season from May to October. These regions include Darwin, Kakadu, Arnhem Land, Broome, and Tropical North Queensland.

It is best to spend it on the Australian beaches during summer in Australia (like in Esperance) or experience snorkelling in the Great Barrier Reef. Moreover, you can also head to Bondi and surf, kayak in Byron Bay, and hiking in Tasmania.

During the autumn season, vibrance is expected in Victoria’s High Country, the Grampians, and in the Cradle Mountain-Lake St. Clair National Park in Tasmania. Australia transforms into brilliant hues of orange, red, and gold hues during the autumn season. There are also festivities in the significant cities celebrating the season. For example, you can also witness turtle hatching in the Southern Great Barrier Reef.

Do They have Snow in Australia?

Head out to the Australian Alps, where the home of great ski fields for winter sports and après enthusiasts can enjoy the winter season. You can also visit the north during this season, including Darwin and Kimberley.

You will experience sunny days with cool nights during springtime in Australia. It is also the season where koalas and kangaroos venture outside after the winter holidays. You can also visit the Australia Zoo and Sunshine Coast to spot animals after hibernation. There, jacarandas and wildflowers are also present, giving festive colours in the cities and regional areas, including Canberra and Sydney. (It is also the last few months before the wet season in the Northern Territory.)

Stay Connected
52,644FansLike
5,673FollowersFollow
828FollowersFollow
Previous articleDo They have Snow in Australia?
Next articleWhy Is There A Need For Pest Control In Gardens?

Do They have Snow in Australia?

7 Things You Must Try Out When Traveling To Australia

Expat Info: 7 Things To Consider Before Moving To Australia