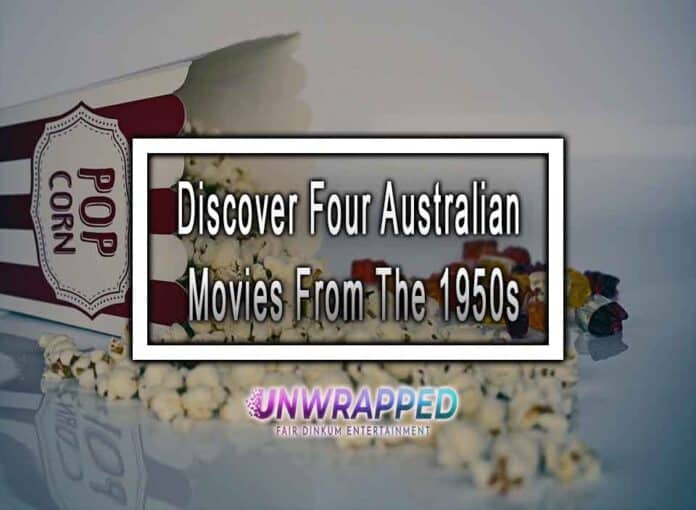 Australia is very prolific in making movies. Among them, several are well known worldwide. Australia, The Adventures of Priscilla: Queen of the Desert, Lion, etc. These are modern ones. But did you know that Aussies were also very creative in the 1950s? They were already offering perspectives of Australian societal issues. Each year, a movie was screened in theaters. We selected three movies from the good old days for you.

This 1950 movie, directed by Ralph Smart, tells the story of Wally King. King is a shepherd who travels in South Australia with his family at the beginning of the 20th century. They go to settle in a land that the government offered them.

The family clashes with an Aboriginal tribe which depends on a waterhole that is part of the family’s private property.

After fierce fights between the two sides, both parties reach an agreement and exploit the water together.

Bitter Springs might seem to be a classic Western movie from the time when it was popular. But it depicts a harsh reality of Australian history. In the 18th century, when Europeans invaded the country, they enslaved, segregated and stole Indegenous lands.

This film (1951) is based on the true character Ned Kelly. The latter was a bushranger (escaped convict), a gang leader, an outlaw and a convicted police-murderer. He is considered one of the last bushrangers of Australia.

The movie romantically portrays Ned Kelly and details its “exploits” embellishing the myth surrounding him. Perform feats and and play with Hellspin login now.

He is the Australian Jesse James. Although considered one of the worst movies of Australian cinematography. However, the recent interest in B movies brought a new interest in this “genre”.

Jedda is a 1955 drama film written, produced and directed by Charles Chauvel.

Jedda is an Aboriginal girl whose mother dies while giving birth to her. She is brought to Sarah McMann, a white woman, wife of the station boss. McMann decides to raise the infant and gives Jedda a European education. The little girl grows up separated from her Aboriginal culture and origins. When Jedda grows into a young woman, she wants to know more about her ancestors’ culture. One day, she meets with an aboriginal man, Marbuck. That’s where her fate changes.

The movie is an important one in Australia’s cinematography. It is the first movie to star two Aboriginal actors. It was also the Australian film to be shot in color.

Dust In The Sun

Policeman Justin Bayard’s mission is to take an Aboriginal prisoner, Emu Foot, to Alice Springs city for his trial. The cause: a tribal killing. Bayard and Emut Foot take refuge at a cattle station during an attack by tribesmen. During their stay, Bayard has to deal with tensions and other crises of the station’s residents. The station owner’s wife is murdered and Emu Foot seems to be the guilty one.

Besides being a “Spaghetti Western”, Dust in the Sun depicts the unequal relations between whites and Indigenious Australians and the behavior towards women in the outback.