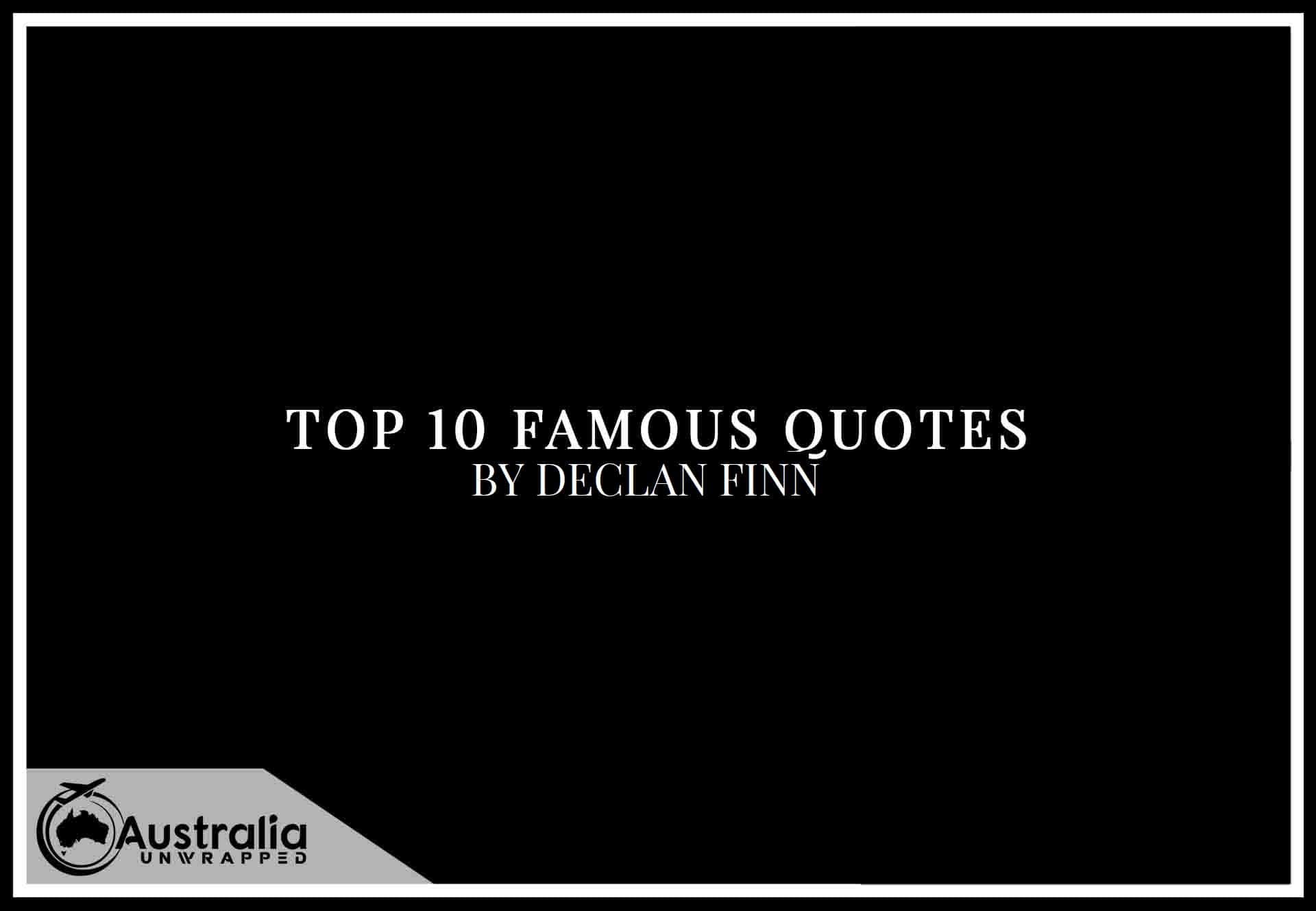 Declan Finn, a writer whom I am guessing you love? Here are our 10 best Declan Finn quotes for you to enjoy. At Australia Unwrapped we believe every book has at least one quotable line, and our mission is to find them all. Here you will find Declan Finn’s top 10 popular and famous quotes. Like every good writer Declan Finn made a number of memorable quotes, here are some of our favorites:

Declan Finn is an award-winning author of thrillers, urban fantasy, and sci-fi, including Honor at Stake, Nominated for the Dragon Award for Best Horror in 2016, Live and Let Bite in 2017, and Codename: Unsub in 2018. As a writer, he is known for “his strong fight scenes, as well as sexy romance novels with just a touch of sexual tension to make toes curl.”

His show is Catholic Geek Radio, and he can usually be found wherever trouble is being made. His other writings include thrillers, video game reviews, and blog posts.

A legion of writers contribute to The Catholic Geeks blog (a legion, for there are many of us). His other books include the comedy-thriller It Was Only on Stun! In which he blows up a sci-fi convention (not this one). The science fiction espionage novel Codename: Winterborn was co-authored by him. Nonetheless, he is most proud of The Pius Trilogy, which includes “A Pius Man,” “A Pius Legacy,” and “A Pius Stand.”

More from the Author: https://amzn.to/3dYFVJW

“I want to see how your mind works.” “Slowly, and with WD-40.”
― Declan Finn, Deus Vult: A Catholic Action Horror Novel

“All in all, most of the customers, both vampire and human, had read far too many novels. They had watched the vampire media and they took their cues from there. They indulged in black leather, took to kinky sex, and did their best to imitate a Laurel K Hamilton book. Half of the audience routinely tried ceremonies, Black Masses, dark rituals, but they typically ended up as sex orgies -less Satan, more basic hedonism. Everyone else had pastimes that generally included drinking blood from drug addicts, petty theft, and generally making a nuisance of themselves.”
― Declan Finn, Live and Let Bite

“Marco always felt like he was a great argument for religion. Whenever someone tried to argue that “Oh, without religion, it’s not like anyone is going to become a mass murderer,” Marco just laughed in their faces. He didn’t know if he would be a mass murderer, a spree killer, or a serial killer, but he knew that there would be a string of bodies behind him wherever he went. But his faith didn’t like that, his God was against it, and every document of the church that Marco got his hands on didn’t approve.”
― Declan Finn, Live and Let Bite

“The news coverage, depending on who you believe, the last pope to take the name either did nothing about the Holocaust; said nothing about the Holocaust; or was actively responsible for the Holocaust.” Abasi said, “True. Before then, I did not know that every historian who specialized in Catholic history was a reject from the seminary, an ex-priest who married an ex-nun, or ‘Catholics’ who, mysteriously, support none of the teachings of the Catholic Church.” Wilhelmina”
― Declan Finn, A Pius Man

“Frankly, as long as New York has utterly insane taxes, we can make a killing just by circumventing them. It’s why we back Democrats. They love hiking up prices. The trade-off comes when they’re totally inept, and we won’t even go into that.” “I didn’t think that would be profitable enough to sustain your business.” “You’d be surprised. I think Jen was the one who said it best, just because you’re doing something illegal doesn’t mean you also have to be immoral, too.”
― Declan Finn, Live and Let Bite

“Besides, you and I both know that more people learn history, or what looks like it, from novels rather than textbooks. I mean, look at Catholic Paranoid novels—I’ve never seen so many people believe so much crap: the Knights of Malta, Knights Templar, the Church suppressing the truth about … well, everything that happened before the Enlightenment—as if we were ever that organized.”
― Declan Finn, A Pius Legacy: A Political Thriller

“The band playing what was charitably known as “death metal” music, but only if the qualifications for it meant that the hearers sincerely wanted to die, preferably in a quick and painless manner, rather than being blasted to death by the noise.”
― Declan Finn, Live and Let Bite

“There’s a good reason why the Catholic Church has never declared that any individual person has gone to Hell—the Vatican condemns certain behaviors, not certain people. It has never tried to take on the moral authority assumed by Dante. “Taken”
― Declan Finn, Pius Holidays: Festive Tales of the Pius Trilogy

“Then again, Marco knew her -even more than she had thought. Most men were easily intimidated -either by her looks, her fangs, her desire to have a relationship, or her ability to lift a car.”
― Declan Finn, Live and Let Bite

“When you’re going into the water at three hundred miles an hour,” Wayne muttered to himself, opening Dead Simple, “life preservers are only good for marking the crash sight.”
― Declan Finn, Too Secret Service: Part One

Quotes for all, here you found our selection of 10 Declan Finn quotes. Make sure you help by commenting your best Declan Finn quote below and sharing our favourite authors so we can look them up, read some of their works and give you the best quotes we can find. We hope you enjoyed our top 10 quotes by Declan Finn. However, feel free to comment below if you disagree or would like to include some other great and memorable Declan Finn quotes in our list.

“The Cardinal Secretary of State was a Vietnamese priest named Pierre Nguyen Van Nho, a former Vincentian missionary into the People’s Republic of China. He had been considered something of a bomb thrower with the press. After living in China under threat of harsh reprisals if caught evangelizing, his idiocy-tolerance threshold had dropped down to that of most career army personnel. He also had a degree in communications before going into the Church, so the two allowed him to tell reporters to go to Hell with all of the best in psycholinguistics he could throw.”
― Declan Finn, A Pius Legacy: A Political Thriller

More from the Author: https://amzn.to/3dYFVJW