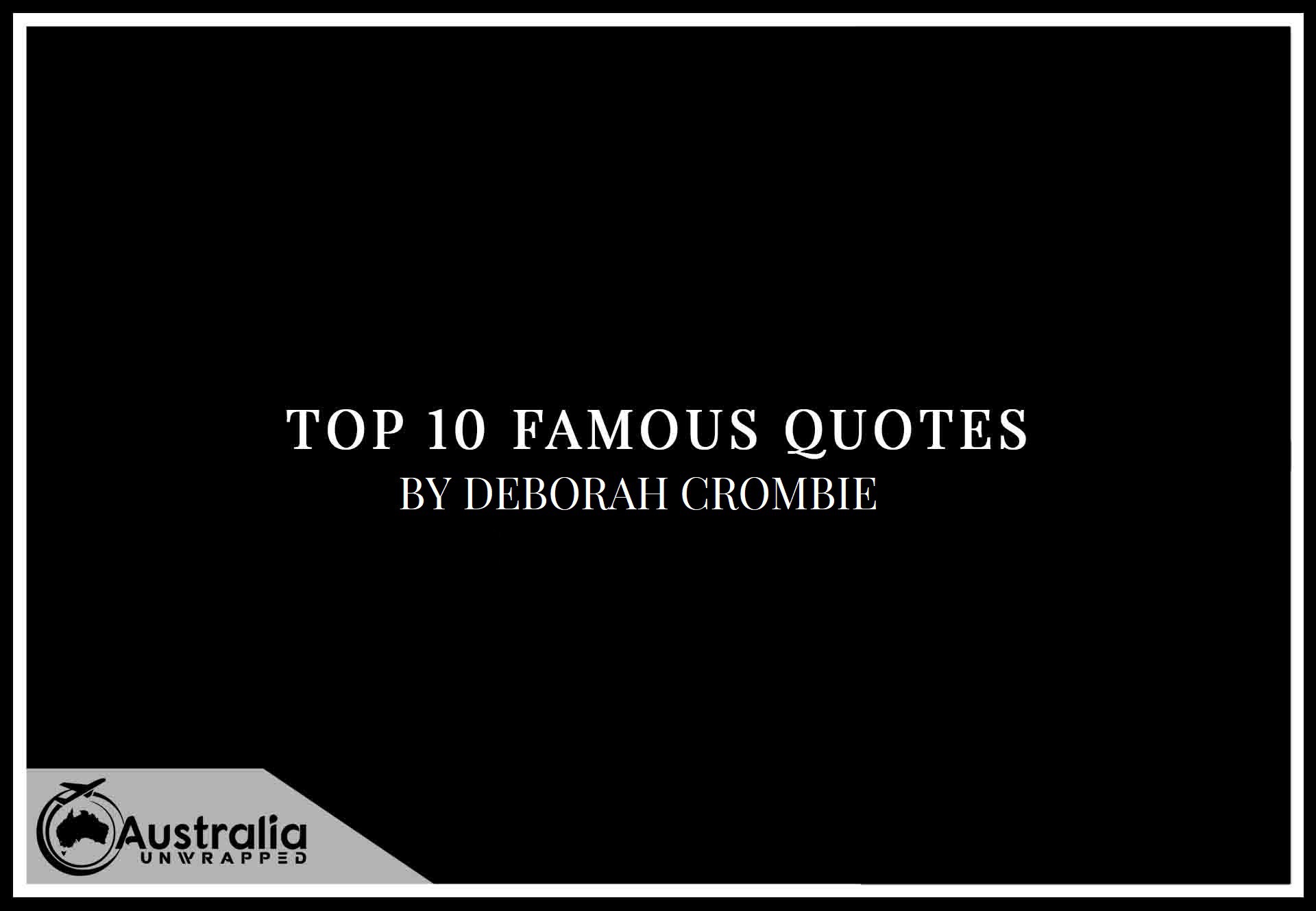 Deborah Crombie, a writer whom I am guessing you love? Here are our 10 best Deborah Crombie quotes for you to enjoy. At Australia Unwrapped we believe every book has at least one quotable line, and our mission is to find them all. Here you will find Deborah Crombie’s top 10 popular and famous quotes. Like every good writer Deborah Crombie made a number of memorable quotes, here are some of our favorites:

Although Deborah Crombie grew up near Dallas, Texas, she always felt that she belonged in England. Upon graduating from Austin College in Sherman, Texas, she made her first trip to Britain and felt at home. Later in life, she lived in Chester, England, and Edinburgh, Scotland, where she failed to make the most of being cold and poor.

After nearly a decade in Texas and raising her small daughter, she came up with the idea for her first novel, a mystery set in Yorkshire. Her only credentials were a desire to write and a severe case of homesickness for Britain. In 1993, A Share in Death was shortlisted for both the Agatha and Macavity awards for Best First Novel.

Dreaming of the Bones, Crombie’s fifth novel, was a New York Times Notable Book in 1997, named one of the 100 Best Crime Novels of the Century by the Independent Mystery Booksellers, nominated for an Edgar award for Best Novel, and won the Macavity award.

Despite living in Texas, the author spends several months out of the year in Britain, maintaining a precarious balance between the two and occasionally confusing cultural references.

More from the Author: https://amzn.to/3ciX1C7

“realized he wasn’t the one”
― Deborah Crombie, Water Like a Stone

“She watched as he put a few ice cubes in a heavy glass, then expertly curled a strip of grapefruit rind from one of the fruits in a bowl on the bar top. “This must be a favorite,” she commented, nodding at the supply of grapefruit nestled in the bowl along with the usual lemons and limes.
He poured a generous measure from the black bottle and handed it to her with a cocktail napkin. “See for yourself.”
Gemma wasn’t in the habit of drinking gin neat, so she sniffed, then took a tentative sip. The flavors exploded in her mouth- coriander and juniper and lime and… grapefruit. “Oh, wow,” she said, when her eyes stopped watering. “That is amazing. I’m converted.”
― Deborah Crombie, A Bitter Feast

“summit of Notting Hill, across the street from the faded elegance of St. John’s Church. Once Dawn had loved this Victorian house with its pale yellow stucco, its superbly proportioned rooms and beautiful appointments, and for a moment she mourned the passing of such an innocent pleasure. Tonight the windows were dark as she turned into the drive, the blank panes mirroring her car lights. She had managed to beat Karl home, then; she would have a few minutes’ respite. Turning off the engine, she reached for her parcels, then paused, squeezing her eyes shut.”
― Deborah Crombie, And Justice There Is None

“After a moment, Callery shrugged. “We’ll go in, then, the two of us, with Weeping Myrtle here.” He nodded towards the café. “It’s Moaning Myrtle,” Kincaid corrected, feeling a flicker of surprise at Callery’s Harry Potter reference. He didn’t seem the fantasy type. And somehow he couldn’t imagine that this man had kids.”
― Deborah Crombie, To Dwell in Darkness

“They made Caesar salad with Cashel Blue cheese. They made Irish lobster confit in Kerrygold butter. They made black pudding the way Fergus remembered it from his childhood, and lamb sausages so delicate they almost melted in your mouth. Everything they put on the menu got raves.”
― Deborah Crombie, A Bitter Feast

“Kincaid wondered what universal formula required that a person should sit down to receive bad news. Was it merely a precaution against fainting or falling, or had it become a kind of foreshadowing, effective in easing the shock?”
― Deborah Crombie, A Share in Death

“A lifetime’s accumulation, she thought, of a woman who had cared about things—things loved for their color and texture and their associations rather than their material value.”
― Deborah Crombie, All Shall Be Well

“We late-lamented, resting here, Are mixed to human jam, And each to each exclaims in fear, ‘I know not which I am!’ ” —Thomas Hardy, “The Levelled Churchyard,” 1882”
― Deborah Crombie, To Dwell in Darkness

“He said the words flatly, with an ease born of years of practice, yet it still amazed him that such simple sentences could contain such betrayal.”
― Deborah Crombie, Leave the Grave Green

“support,” he added, gesturing at his ankle,”
― Deborah Crombie, To Dwell in Darkness

“Cream of mushroom. Come and taste.” When Gemma came to stand beside her, Viv dipped some soup into a tasting spoon and handed it to her. “We’ve a local farmer growing mushrooms for the markets, so I buy whatever he has on hand. This has brown mushrooms, shiitake, and some dried porcini, for depth of flavor.”
Gemma took a little sip from the spoon. “Oh, I see what you mean,” she said in surprise. “It’s delicious, but it’s somehow more- mushroomy.”
“It’s not balanced yet. It needs more salt.” Viv added a generous palmful from a dish by the hob and stirred the pot thoroughly. Grabbing two more spoons, she tasted it herself, then handed a spoonful to Gemma. “Now try.”
Obediently, Gemma tasted. This time the flavors seemed to pop on her tongue. “Oh, my goodness. It’s not salty- it just tastes… I don’t know… brighter?”
“That’s what salt does. It’s a flavor enhancer. You have a good palate.”
― Deborah Crombie, A Bitter Feast

More from the Author: https://amzn.to/3ciX1C7