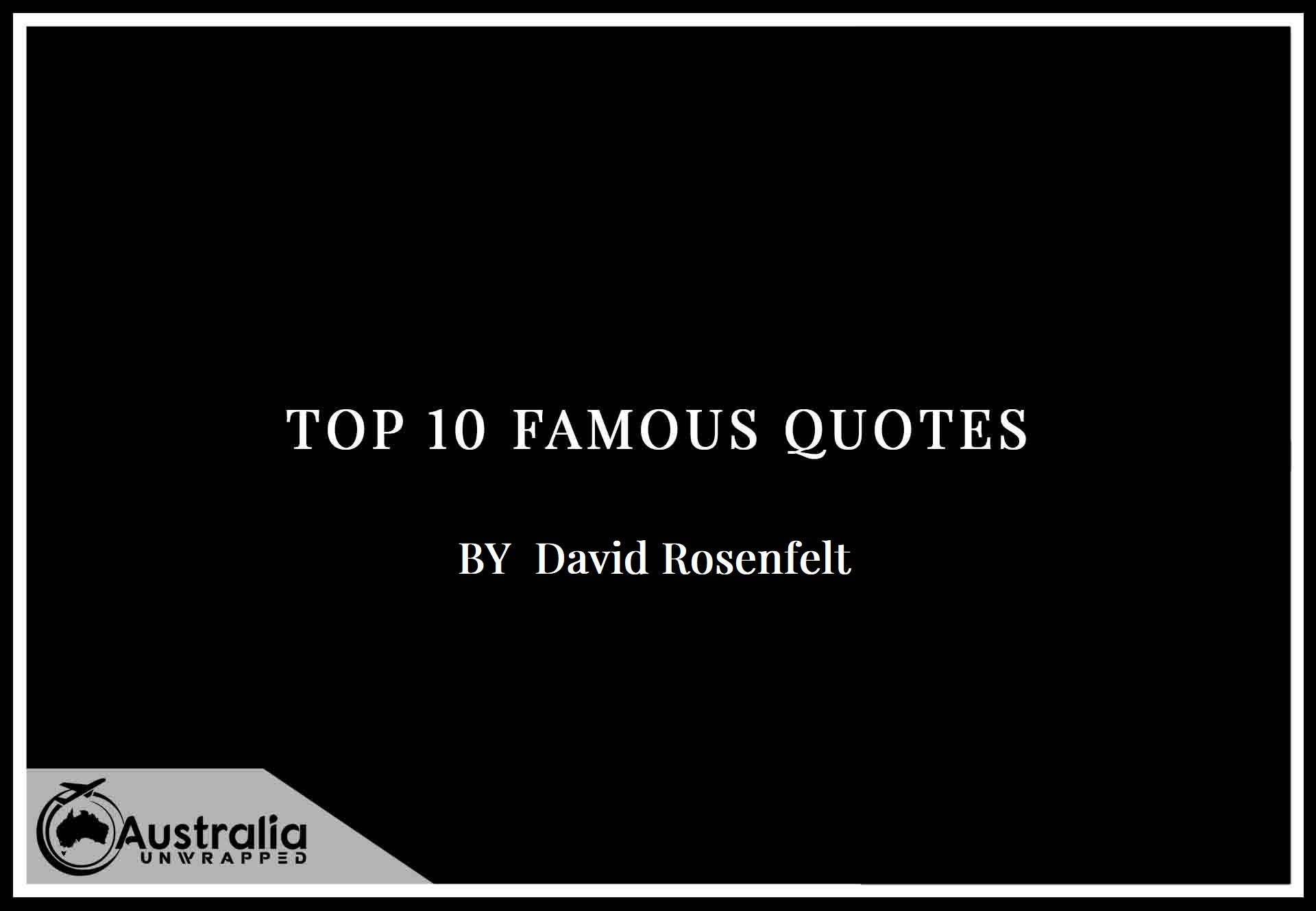 David Rosenfelt, a writer whom I am guessing you love? Here are our 10 best David Rosenfelt quotes for you to enjoy. At Australia Unwrapped we believe every book has at least one quotable line, and our mission is to find them all. Here you will find David Rosenfelt’s top 10 popular and famous quotes. Like every good writer David Rosenfelt made a number of memorable quotes, here are some of our favourites:

“The face of a golden retriever feels like home.”
― David Rosenfelt, Dogtripping: 25 Rescues, 11 Volunteers, and 3 RVs on Our Canine Cross-Country Adventure

“The most important moments in a trial are often not seen by a jury. That is because it’s one of the judge’s main responsibilities to screen what they see and hear, lest they be prejudiced. It’s the “you can’t unring a bell” theory; once the jury hears something they shouldn’t have heard, th trial is forever tainted.

If the damage is great enough, a mistrial is the result. Judges basically prefer nuclear war to mistrials.”
― David Rosenfelt , Leader of the Pack

“I like dogs considerably more than I like humans. That doesn’t make me antihuman; there are plenty of humans I’m very fond of. But generally speaking, if I simultaneously meet a new human and a new dog, I’m going to like the dog more. I’m certainly going to trust the dog more.”
― David Rosenfelt, Play Dead

“Colonel Mickelson looks like he could defend Fort Hamilton by himself if Staten Island ever declared war and invaded…
If Jack Nicholson looked like this when he yelled that Tom Cruise couldn’t handle the truth, Cruise would have said, “Yes, you’re right, I’m sorry. My bad.”
― David Rosenfelt, Dog Tags

“Harriet resisted, until Tara pulled out the big move…the combination “lean-against nuzzle, with a slight lick and an adoring glance.” In dog-land the move had a degree of difficulty of nine point seven, and as far as I know, there is no known defense against it.”
― David Rosenfelt, Leader of the Pack

“I have a lot of money, many millions some earned and more inherited. What I don’t have is a desire to work. I’m not sure where I left it, but it’s been missing for a while, and I haven’t searched real hard.”
― David Rosenfelt, Unleashed

“Most dogs, when you hold a leash up, go nuts and run to the door. Crash, on the other hand barely looks up from his spot on the couch. His expression is saying, What the hell are you doing with that thing?”
― David Rosenfelt, Unleashed

“Sure. Happy to do it,’ I say. In terms of level of truthfulness, that statement would rank with something like, ‘Damn, I’m going to be traveling to Saturn that day to go giraffe hunting.”
― David Rosenfelt, Leader of the Pack

“You don’t have to be a college graduate to murder someone.” “Thank you for making the jury aware of that, Lieutenant. I’m sure they had no idea.”
― David Rosenfelt, Open and Shut

“The Los Angeles parade would begin in Griffith Park, where a large crowd would assemble and the speeches would be given. Every politician of consequence would be there. There was no way they would miss a chance to publicly praise the troops and honor those who had lost their lives in service.
Some of the tributes would be sincere and heartfelt, and some less so. But participating in the event, vowing undying support for the U.S. military, was an absolute must to maintain political viability. It was okay to vote to cut funds for veterans’ healthcare, but don’t dare miss a chance to jump on the Memorial Day bandwagon.”
― David Rosenfelt, Unleashed