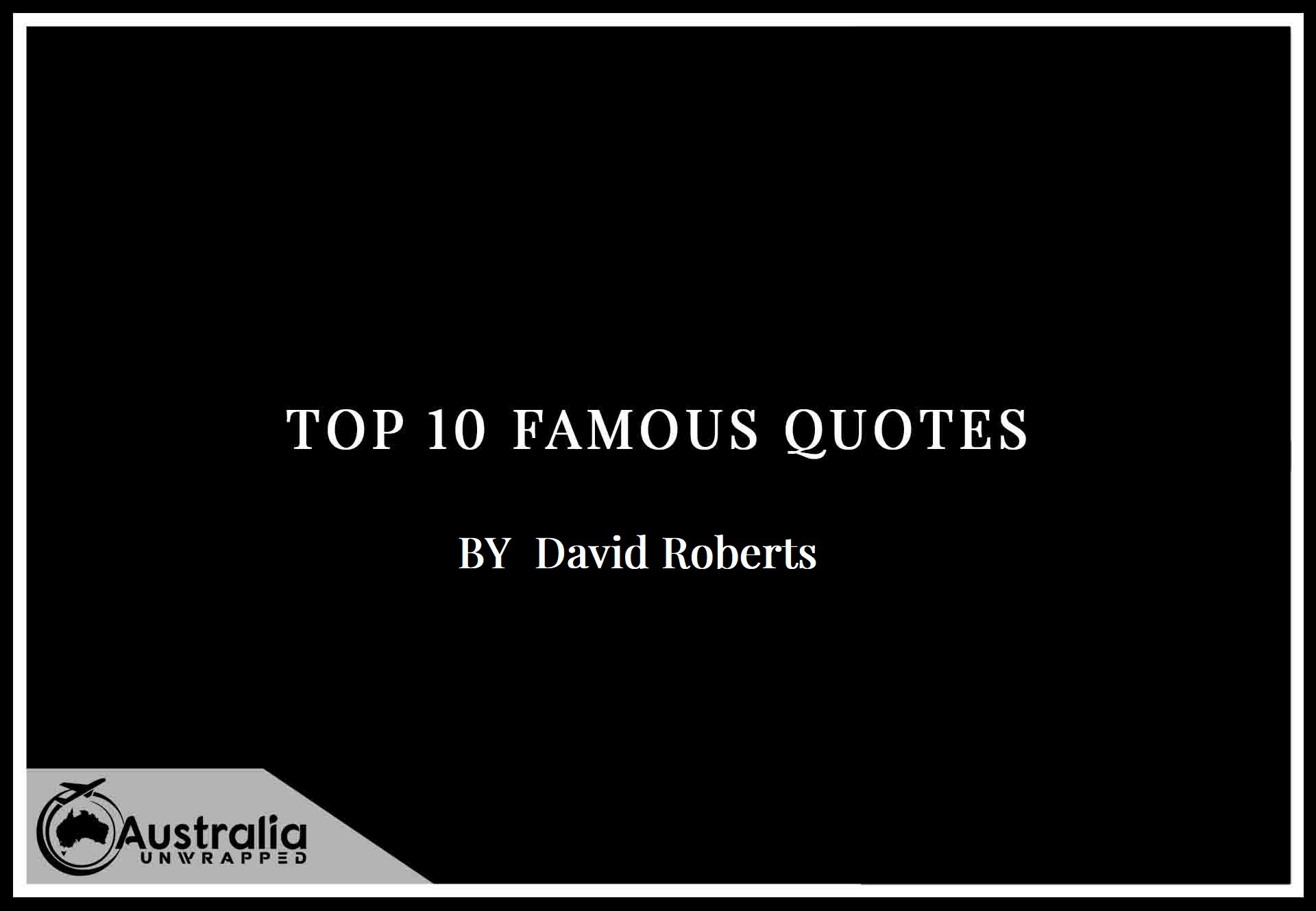 David Roberts, a writer whom I am guessing you love? Here are our 10 best David Roberts quotes for you to enjoy. At Australia Unwrapped we believe every book has at least one quotable line, and our mission is to find them all. Here you will find David Roberts’s top 10 popular and famous quotes. Like every good writer David Roberts made a number of memorable quotes, here are some of our favorites:

A climber and mountaineer, David Roberts (born 1943) is an author of books and articles about climbing. In the 1960s, his books The Mountain of My Fear and Deborah: A Wilderness Narrative chronicled major ascents of the mountains of Alaska, which had a major impact on mountaineering literature. He has climbed many first ascents in Alaska during the past thirteen seasons, including the Wickersham Wall on Mount McKinley, the West Rib of Mount Huntington, the Western Brooks Range, the Kichatna Spires, and Mount Dickey’s East Face.

More from the Author: https://amzn.to/3PTAiKy

“Everett was a loner, but he liked people too damn much to stay down there and live the rest of his life in secret. A lot of us are like that […]: We like companionship, see, but we can’t stand to be around people for very long. So we get ourselves lost, come back for a while, then get the hell out again. Everett was strange. Kind of strange. But him and [Christopher] McCandless, at least they tried to follow their dream. They tried. Not many do. (Ken Sleight)”
― David Roberts, Finding Everett Ruess: The Life and Unsolved Disappearance of a Legendary Wilderness Explorer

“I have been thinking more and more that I shall always be a lone wanderer of the wildernesses. God, how the trail lures me. You cannot comprehend its resistless fascination for me. After all the lone trail is best. I hope I’ll be able to buy good horses and a better saddle. I’ll never stop wandering. And when the time comes to die, I’ll find the wildest, loneliest, most desolate spot there is.”
― David Roberts, Finding Everett Ruess: The Life and Unsolved Disappearance of a Legendary Wilderness Explorer

“Since 1969, more than 30,000 specimens of stone from outer space that have survived their headlong plunge through the earth’s atmosphere have been recovered from the southern continent. One of them, retrieved in 2003, has been proven, thanks to a remarkable analysis by spectrograph, to have once been part of the planet Mars.”
― David Roberts, Alone on the Ice: The Greatest Survival Story in the History of Exploration

“The ultimate success of Amundsen’s expedition in reaching the South Pole in December 1911 would depend on two crucial logistical choices: the decision to use skis and the reliance on dog teams to haul the sledges. It was the tried-and-true Norwegian style of polar travel, but one that British explorers never fully embraced.”
― David Roberts, Alone on the Ice: The Greatest Survival Story in the History of Exploration

“We dwelt on the fringe of an unspanned continent, where the chill breath of a vast, polar wilderness, quickening to the rushing might of eternal blizzards, surged to the northern seas. We had discovered an accursed country. We had found the Home of the Blizzard.”
― David Roberts, Alone on the Ice: The Greatest Survival Story in the History of Exploration

“Say that I starved; that I was lost and weary; That I was burned and blinded by the desert sun; Footsore, thirsty, sick with strange diseases; Lonely and wet and cold … but that I kept my dream!”
― David Roberts, Finding Everett Ruess: The Life and Unsolved Disappearance of a Legendary Wilderness Explorer

“On those occasions when a bit of wine or liquor was served with dinner, toasts echoed around the table. The most frequently uttered was “To our sweethearts and wives—may they never meet.”
― David Roberts, Alone on the Ice: The Greatest Survival Story in the History of Exploration

“Since 1831, the North Magnetic Pole has drifted almost 700 miles, generally in a westerly direction. It is currently migrating at a pace of about 25 miles per year.”
― David Roberts, Alone on the Ice: The Greatest Survival Story in the History of Exploration

“Just have one more try—it’s dead easy to die, It’s the keeping-on-living that’s hard.”
― David Roberts, Alone on the Ice: The Greatest Survival Story in the History of Exploration

Quotes for all, here you found our selection of 10 David Roberts quotes. Make sure you help by commenting your best David Roberts quote below and sharing our favorite authors so we can look them up, read some of their works and give you the best quotes we can find. We hope you enjoyed our top 10 quotes by David Roberts. However, feel free to comment below if you disagree or would like to include some other great and memorable David Roberts quotes in our list.

“In the sagas of Jules Verne and H. G. Wells and Arthur Conan Doyle, the scholar-adventurer burned his candle to a nub as he pored over quaint and curious volumes of forgotten lore. A map drawn in faded ink, a cryptic document in Latin fell into his fingers. From such glimmerings, a glorious excursion into terra incognita unfurled, as the scholar’s team wound through an Icelandic volcano down to the center of the earth or traversed a lost Venezuelan plateau teeming with dinosaurs. As”
― David Roberts, In Search of the Old Ones

More from the Author: https://amzn.to/3PTAiKy