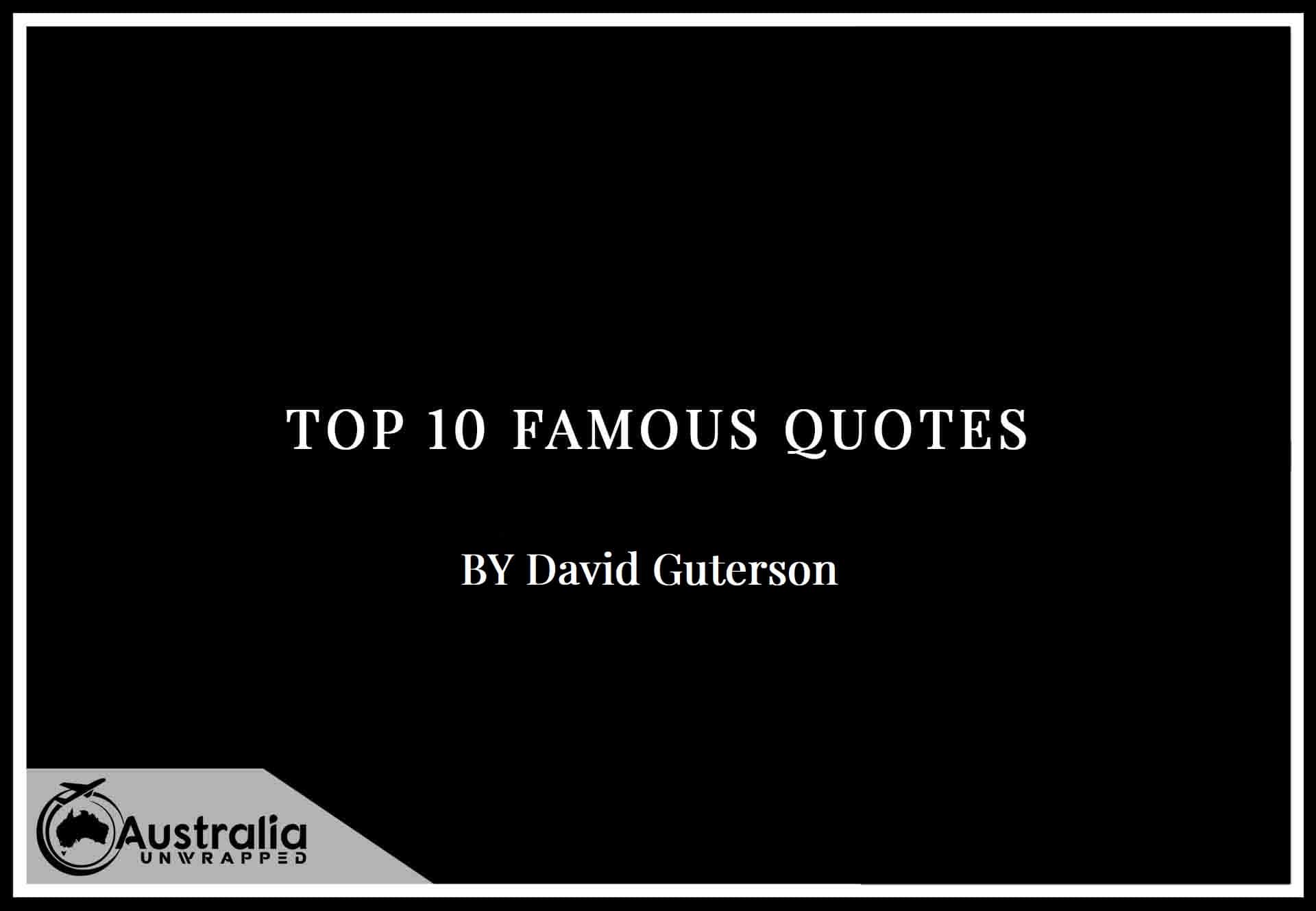 David Guterson, a writer whom I am guessing you love? Here are our 10 best David Guterson quotes for you to enjoy. At Australia Unwrapped we believe every book has at least one quotable line, and our mission is to find them all. Here you will find David Guterson’s top 10 popular and famous quotes. Like every good writer David Guterson made a number of memorable quotes, here are some of our favorites:

He is best known for Snow Falling on Cedars (1994), which won the 1995 PEN/Faulkner Award. The book has sold nearly four million copies to date. The book was adapted into a 1999 film, directed by Scott Hicks and starring Ethan Hawke. In the category of cinematography, the film received an Academy Award nomination. His later novels include East of the Mountains (1999), Our Lady of the Forest (2003), and The Other (2008). In 1989, he published a collection of short stories called The Country Ahead of Us, the Country Behind, and in 1992, he published a book of essays on homeschooling called Family Matters: Why Homeschooling Makes Sense.

Born in Seattle, Washington, Guterson earned an M.A. at the University of Washington. Guggenheim Fellow and former Harper’s magazine contributor, he co-founded Field’s End, an organization for writers.

More from the Author: https://amzn.to/3Ry3LLt

“The rain fell with such fervor that the world disappeared.”
― David Guterson, East of the Mountains

“To deny that there was this dark side of life would be like pretending that the cold of winter was somehow only a temporary illusion, a way station on the way to the higher “reality” of long, warm, pleasant summers. But summer, it turned out, was no more real than the snow that melted in wintertime.”
― David Guterson, Snow Falling on Cedars

“How could they say that they truly loved each other? They had simply grown up together, been children together, and the proximity of it, the closeness of it, had produced in them love s illusion. And yet–on the other hand–what was love if it wasn’t this instinct she felt…”
― David Guterson, Snow Falling on Cedars

“None of those other things makes a difference. Love is the strongest thing in the world, you know. Nothing can touch it. Nothing comes close. If we love each other we’re safe from it all. Love is the biggest thing there is.”
― David Guterson, Snow Falling on Cedars

“I know you’ll think this is crazy, but all I want to do is hold you, and I think that if you’ll let me do that just for a few seconds, I can walk away, and never speak to you again.”
― David Guterson, Snow Falling on Cedars

“There are things in this universe that we cannot control, and then there are the things we can. . . . Let fate, coincidence, and accident conspire; human beings must act on reason.”
― David Guterson, Snow Falling on Cedars

“Ishmael gave himself to the writing of it, and as he did so he understood this, too: that accident ruled every corner of the universe except the chambers of the human heart.”
― David Guterson, Snow Falling on Cedars

“The strange thing was, he wanted to like everyone. He just couldn’t find a way to do it.”
― David Guterson, Snow Falling on Cedars

“That the world was silent and cold and bare and that in this lay its terrible beauty”
― David Guterson, Snow Falling on Cedars

“Accident ruled every corner of the universe except the chambers of the human heart.”
― David Guterson, Snow Falling on Cedars

Quotes for all, here you found our selection of 10 David Guterson quotes. Make sure you help by commenting your best David Guterson quote below and sharing our favorite authors so we can look them up, read some of their works and give you the best quotes we can find. We hope you enjoyed our top 10 quotes by David Guterson. However, feel free to comment below if you disagree or would like to include some other great and memorable David Guterson quotes in our list.

“The world was incomprehensibly intricate, and yet this forest made a simple sense in her heart that she felt nowhere else.

[S]he wanted only her own strawberry farm, the fragrance of the fields and the cedar trees, and to live simply in this place forever.

[S]he had fallen into loving him long before she knew herself, though it occurred to her now that she might never know herself, that perhaps no one ever does, that such a thing might not be possible.

[Y]ou should learn to say nothing that will cause you regret. You should not say what is not in your heart — or what is only in your heart for a moment. But you know this — silence is better.”
― David Guterson, Snow Falling on Cedars

More from the Author: https://amzn.to/3Ry3LLt