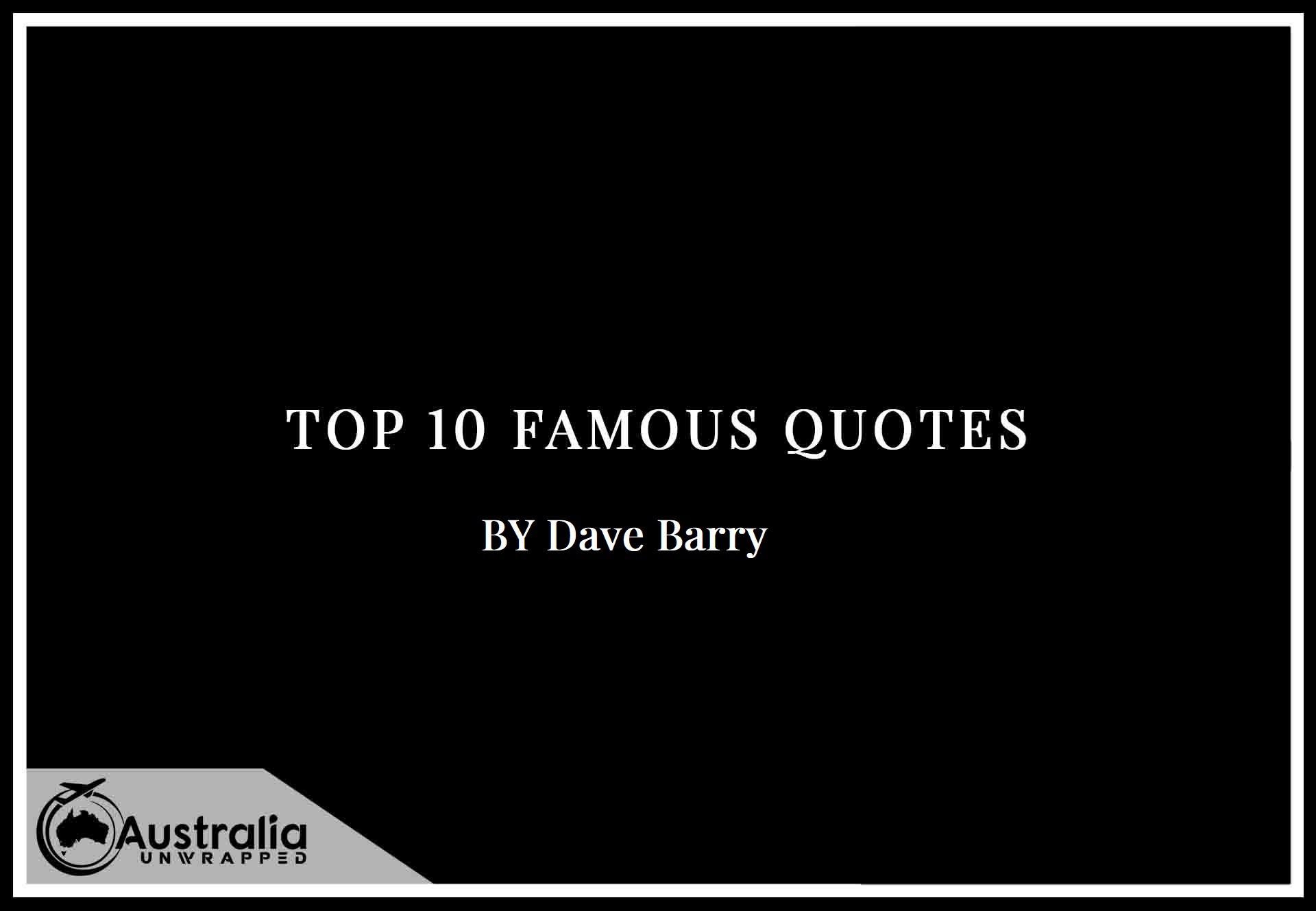 Dave Barry, a writer whom I am guessing you love? Here are our 10 best Dave Barry quotes for you to enjoy. At Australia Unwrapped we believe every book has at least one quotable line, and our mission is to find them all. Here you will find Dave Barry’s top 10 popular and famous quotes. Like every good writer Dave Barry made a number of memorable quotes, here are some of our favorites:

Dave Barry is a humor columnist. During his 25-year career, he was a syndicated columnist whose work appeared in more than 500 newspapers in the U.S. and abroad. He won the Pulitzer Prize for Commentary in 1988. Many people still don’t understand how this happened.
He has also written 30 books, but none of them contain any useful information. Several of his books were adapted as episodes of his CBS television sitcom “Dave’s World,” in which Harry Anderson played a taller Dave.
Among Dave’s members are Stephen King, Amy Tan, Ridley Pearson, and Mitch Albom, who also play lead guitar in the Rock Bottom Remainders. Despite not being musically skilled, the band is extremely loud. Additionally, Dave has appeared on many TV shows, including the David Letterman show, where he demonstrated that a Barbie doll could set fire to a pair of men’s underpants.
During his spare time, Dave runs for president of the United States. If he is elected, he will seek the death penalty against those responsible for making Americans install low-flow toilets.
His wife, Michelle, is a sportswriter in Miami, Florida. He has a son, Rob, and a daughter, Sophie, neither of whom finds him funny.

More from the Author: https://amzn.to/3x7QUI7

“A person who is nice to you, but rude to the waiter, is not a nice person.”
― Dave Barry

“In the old days, it was not called the Holiday Season; the Christians called it ‘Christmas’ and went to church; the Jews called it ‘Hanukkah’ and went to synagogue; the atheists went to parties and drank. People passing each other on the street would say ‘Merry Christmas!’ or ‘Happy Hanukkah!’ or (to the atheists) ‘Look out for the wall!”
― Dave Barry

“There’s nothing wrong with enjoying looking at the surface of the ocean itself, except that when you finally see what goes on underwater,you realize that you’ve been missing the whole point of the ocean. Staying on the surface all the time is like going to the circus and staring at the outside of the tent.”
― Dave Barry

“It is a well-documented fact that guys will not ask for directions. This is a biological thing. This is why it takes several million sperm cells… to locate a female egg, despite the fact that the egg is, relative to them, the size of Wisconsin.”
― Dave Barry

“The one thing that unites all human beings, regardless of age, gender, religion, economic status, or ethnic background, is that, deep down inside, we all believe that we are above-average drivers.”
― Dave Barry, Dave Barry Turns Fifty

“It is inhumane, in my opinion, to force people who have a genuine medical need for coffee to wait in line behind people who apparently view it as some kind of recreational activity.”
― Dave Barry

“When trouble arises and things look bad, there is always one individual who perceives a solution and is willing to take command. Very often, that individual is crazy. ”
― Dave Barry, Dave Barry Turns Fifty

“If you had to identify, in one word, the reason why the human race has not achieved, and never will achieve, its full potential, that word would be ‘meetings.”
― Dave Barry

“Electricity is actually made up of extremely tiny particles called electrons, that you cannot see with the naked eye unless you have been drinking.”
― Dave Barry

“Your hand and your mouth agreed many years ago that, as far as chocolate is concerned, there is no need to involve your brain.”
― Dave Barry

Quotes for all, here you found our selection of 10 Dave Barry quotes. Make sure you help by commenting your best Dave Barry quote below and sharing our favorite authors so we can look them up, read some of their works and give you the best quotes we can find. We hope you enjoyed our top 10 quotes by Dave Barry. However, feel free to comment below if you disagree or would like to include some other great and memorable Dave Barry quotes in our list.

“I like the relaxed way in which the Japanese approach religion. I think of myself as basically a moral person, but I’m definitely not religious, and I’m very tired of the preachiness and obsession with other people’s behavior characteristic of many religious people in the United States. As far as I could tell, there’s nothing preachy about Buddhism. I was in a lot of temples, and I still don’t know what Buddhists believe, except that at one point Kunio said ‘If you do bad things, you will be reborn as an ox.’

This makes as much sense to me as anything I ever heard from, for example, the Reverend Pat Robertson.”
― Dave Barry, Dave Barry Does Japan

More from the Author: https://amzn.to/3x7QUI7