Dates Sweeteners With a Long History 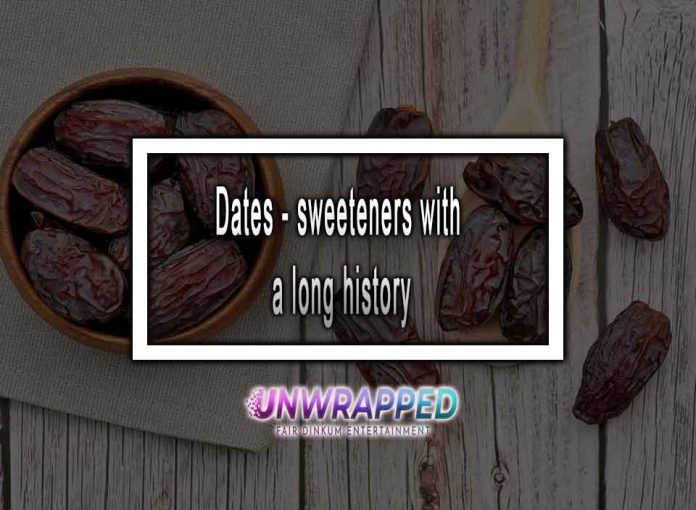 Dates as the Ancient Sweetener in the World

When we think of dates, we automatically think of the Middle East. Despite the fact that they are a well-known commodity, we nevertheless associate them with exotic connotations in the Western world.

The date originates from the Phoenix dactylifera L palm, also known as the royal palm and renowned as the “tree of life” in Africa and the Middle East. Iraq, Iran, Israel, and Tunisia are the main producers of dates, although they are also cultivated in California and Elche.

As the dates mature, they take on a brown hue, which provides their soft skin colour. They have a sweet, highly meaty pulp within and an elongated seed.

Dates are said to have been first farmed about 6,000 years ago. It’s hardly surprising, given that it’s a really healthy dish that the Greeks, Hebrews, and Egyptians all knew about. This meal is mentioned more than 20 times in the Koran. When the sun sets during the Ramadan festival, it is the first meal eaten by Muslims. It’s also one of the most popular components in energy bars taken by athletes.

Dates come in a variety of sizes and colours, but the Medjool variety cultivated in Israel is the most prevalent in stores; they are enormous, dark-colored dates. The Deglet Noor is a Tunisian fruit with a smooth, lustrous skin. The Barhi, on the other hand, is more spherical and golden in colour, and is frequently offered in branches.

The date is a dried fruit

The date is a dried fruit that is eaten after being harvested from the palm tree. The gathering takes place between October and January, although they may also be eaten, either dried or candied throughout the year. A date palm may yield up to 200 kilograms of dates in a single year. The issue is that only female palm trees give fruit, and the tree’s gender isn’t determined until it’s 7 or 8 years old.

They are a fruit with a lot of sugar, which means they may quickly ferment, so store them in the fridge. They may endure for up to six months, however they will gradually dry out. Because the dates do not all mature at the same time, you must collect them as they ripen off the palm tree.

From a nutritional standpoint, it is a fruit with a lot of energy, since each 100 grams has 67 grams of carbs, almost little fat, and 288 calories. They’re also a good source of fibre. They are high in zinc, potassium, calcium, iron, magnesium, and vitamin E, B3, and folate in terms of minerals and vitamins.

In ancient times, dates were used as sweeteners, even before sugar was discovered. They were either chopped into little pieces or converted into syrup for this purpose. They are now one of the items used to attempt to limit refined sugar consumption. This is due to the fact that they contain 63 percent natural sugar (glucose and fructose), as well as fibre, which helps to lower the glycemic index.

Also, Read : How Can CBD Gummies Help You in Sleep While You Are Travelling

Are dates a good sweetener?