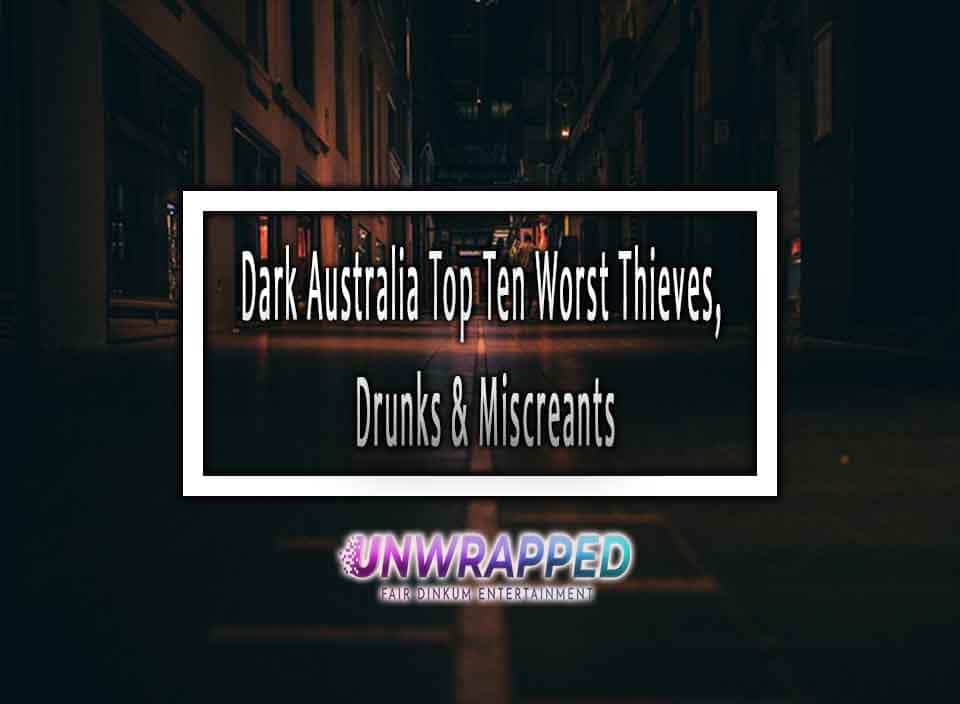 Australian statistics in 2020 show that less than three per cent of the population became victims of theft-related assaults, threats, and break-ins. As for personal crimes, only less than one per cent experienced rape and robbery. The crime rates for these crimes have also decreased in the past decade.

As for alcohol-related crimes, the reports are much darker. The Royal Australasian College of Surgeons says over seventy thousand cases of assaults are related to alcohol consumption. At least 30% of this figure is domestic violence.

In this article, you will meet the top ten worst thieves, drunks, and miscreants in Australia.

Leonard Arthur McPherson was among the most influential crime organisers in Australia. He controlled networks of gangs and lawbreakers, including robbers, illegal gamblers, prostitutes, and drug dealers. Some believe that his clout once reached America.

Lenny McPherson was brutally violent. He visited his mother on her 70th birthday after several years of separation. Lenny McPherson brought a rabbit, and he angrily asked his mother why he was uninvited to the party. When she replied that it was his criminal involvement, Lenny McPherson snapped the rabbit’s head off in front of her mother before leaving.

Also See: Top Ten Of The Worst Crimes That Happened In Australia

Hakki “Tim” Atahan was a young man during his immigration to Australia from Turkey. Since his career began in March 1983, Tim Atahan stole around $200,000 in twenty bank heists.

But his stint ended when he died on January 31, 1984. On that day, he tried to steal from three banks. But after successfully robbing two banks, his luck ran out. A bank teller clicked the alarm before Tim Atahan threatened them for cash. Because of this, the Australian police got to surround the branch while Tim Atahan tried to take $40,000.

To escape, Tim Atahan used five hostages, including the bank manager, as he entered into his getaway vehicle. But the police soon cornered Tim Atahan with blockades and a helicopter overlooking the chase. He shot a policeman to attempt to flee, but the police killed him with multiple gunshots.

Unlike the other cases in this list, the Murwillumbah bank incident remains mysterious. This New South Wales bank branch lost over $1.7 million meant as payment to the local workers’ salaries.

The authorities suspect the Magnetic Drill Gang and its safe-breaker, Graham Kinniburgh. He is known as one of the most powerful gangsters in Victoria, and reports show that he rehearsed cracking vaults leading up to the Murwillumbah robbery. Another clue was the tool used by the gang—a diamond-built electromagnetic drill.

The amount of money stolen by the gang currently has a value of $8.8 million with inflation. Hence, the Murwillumbah bank robbery is the worst heist in Australia.

At the noontime of May 26, 1971, a man hiding under “Mr Brown” called Sydney police. He threatened them about a bomb on a Qantas flight from the city to Hong Kong. Mr Brown said that the bomb would detonate if the plane would lower down than 6,500 meters in the air. The authorities must give him $500,000 to stop the bomb.

During the negotiations, the pilot circled until the plane almost had no fuel. So Qantas and the police agreed to follow Mr Brown’s instructions and gave him the cash. He told them afterwards that he only deceived them.

Mr Brown would later get identified as Peter Macari. He got sentenced to fifteen years of imprisonment.

In 2020, the Melbourne Gold Company adjusted its security protocols to meet the pandemic restrictions. One of these is mandatory masking. Karl Kachami took advantage of this. Using a face mask, he entered their branch with a pistol, threatening the employees. Then, he stole over $3.9 million worth of jewellery, money, gems, and gold parts.

Jessie Wilson is one of the worst cases of alcohol-related crime. This man binged beer and wine for two weeks. Because of this, he became a “blind drunk” when he argued with his ex-partner. He pushed her, kicked the back of her chest, and slammed her on the ground repeatedly. The woman died of brain damage and internal bleeding.

Jessie Wilson may face up to sixteen years of imprisonment. The victim left three orphaned children.

We will now talk about the worst breed of miscreants—serial killers and notorious criminals. What makes Catherine Birnie unique as a murderer is her gender. After all, most serial killers are men, including his spouse, David Birnie.

From October to November 1986, Catherine and David Birnie kidnapped and killed four women inside their Perth home. David raped them, then the couple stabbed, strangled, and buried their victims outside the city. Fortunately, their fifth abductee escaped and reported the two to the police.

Catherine and David Birnie got life sentences in 1987. But he committed suicide in prison in 2005. Meanwhile, Catherine’s petitions for parole always get denied.

Kerryn Henstridge and Anne Smerdon posted advertisements for an available living space in their home. Peter Dempsey, Anne’s brother-in-law, came to visit the house. Unfortunately for the three decent-living residents, a serial killer randomly entered. He restrained the three with cables before shooting them with a rifle.

Ashley Coulston continued kidnapping and murdering people before getting caught in the sea while escaping to New Zealand in 1988.

Arthur Smith, known as “Neddy,” was the leading seller of heroin in Australia. He also got involved in murder, robbery, and rape cases. It all started when Arthur Smith was only eleven years old when he attacked his brother with a knife.

Arnold Sodeman seemed to change his ways after several years in prison during the 1920s. He got married and had a daughter with his wife.

Also Enjoy: Top Ten Events That Lead To The Demise Of Ned Kelly

Stay Connected
52,628FansLike
5,671FollowersFollow
828FollowersFollow
Previous articleMake Sure That You Are Wise With Money Transfer Online
Next articleUpcoming Marvel movies in 2022 and 2023