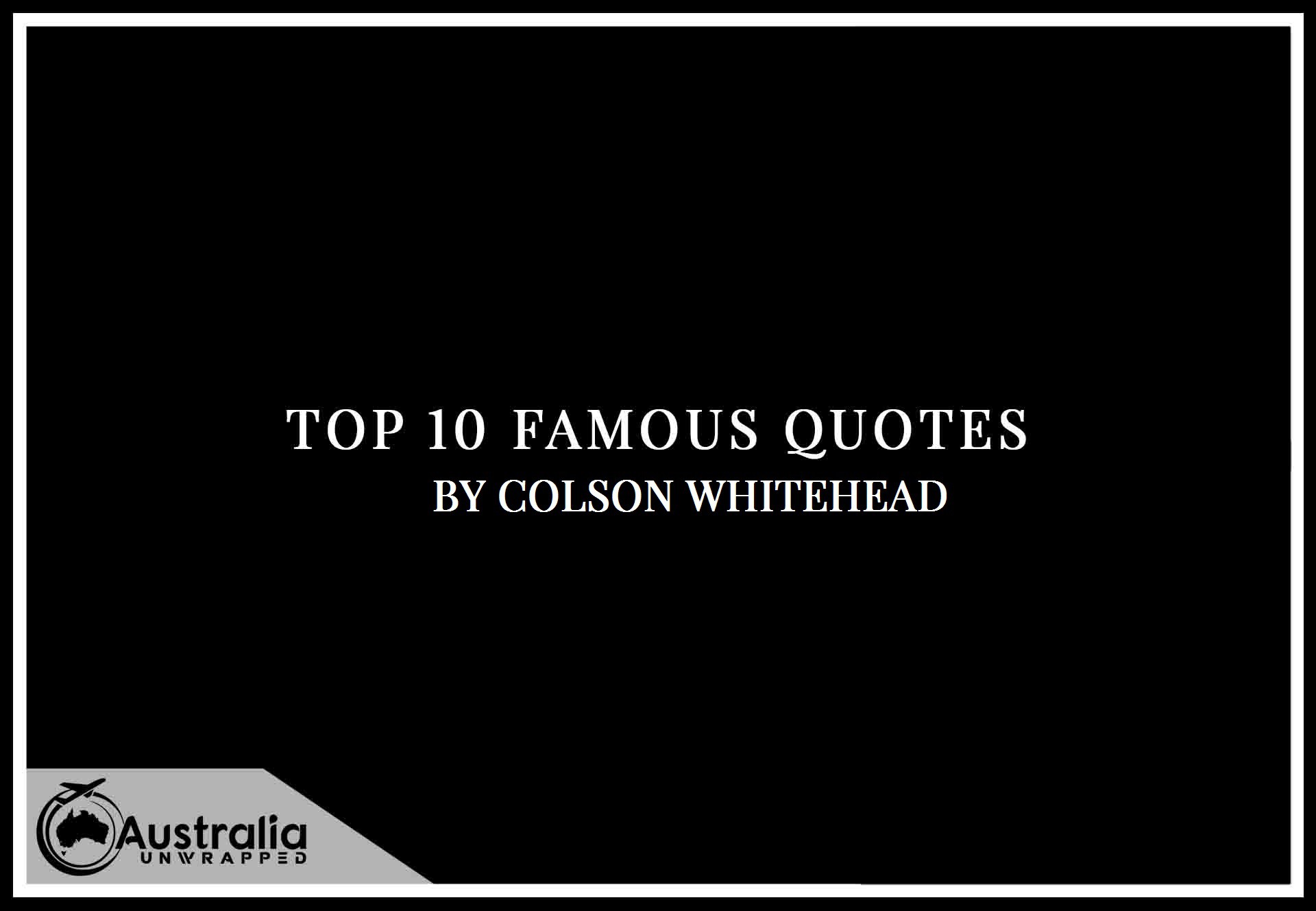 Colson Whitehead, a writer whom I am guessing you love? Here are our 10 best Colson Whitehead quotes for you to enjoy. At Australia Unwrapped we believe every book has at least one quotable line, and our mission is to find them all. Here you will find Colson Whitehead’s top 10 popular and famous quotes. Like every good writer Colson Whitehead made a number of memorable quotes, here are some of our favorites:

Eight novels and two works of non-fiction have been written by Colson Whitehead, including The Underground Railroad, which won the Pulitzer Prize, the National Book Award, Carnegie Medal, Heartland Prize, Arthur C. Clarke Award, Hurston-Wright Award, and was longlisted for the Booker Prize. The novel is being adapted into a TV series by Barry Jenkins for Amazon. The Nickel Boys won the Pulitzer Prize, the Kirkus Prize, and the Orwell Prize for Political Fiction for Whitehead.

He lives in New York City and has received a Whiting Writers’ Award, a Guggenheim Fellowship, and a MacArthur Fellowship.

More from the Author: https://amzn.to/3PHz0Cq

“A monster is a person who has stopped pretending.”
― Colson Whitehead

“And America, too, is a delusion, the grandest one of all. The white race believes–believes with all its heart–that it is their right to take the land. To kill Indians. Make war. Enslave their brothers. This nation shouldn’t exist, if there is any justice in the world, for its foundations are murder, theft, and cruelty. Yet here we are.”
― Colson Whitehead, The Underground Railroad

A: I could have written about upper middle class white people who feel sad sometimes, but there’s a lot of competition.”
― Colson Whitehead

“The whites came to this land for a fresh start and to escape the tyranny of their masters, just as the freemen had fled theirs. But the ideals they held up for themselves, they denied others.”
― Colson Whitehead, The Underground Railroad

“Cora didn’t know what optimistic meant. She asked the other girls that night if they were familiar with the word. None of them had heard it before. She decided that it meant trying.”
― Colson Whitehead, The Underground Railroad

“Slavery is a sin when whites were put to the yoke, but not the African. All men are created equal, unless we decide you are not a man.”
― Colson Whitehead, The Underground Railroad

“Stolen bodies working stolen land. It was an engine that did not stop, its hungry boiler fed with blood.”
― Colson Whitehead, The Underground Railroad

“The world may be mean, but people don’t have to be, not if they refuse.”
― Colson Whitehead, The Underground Railroad

“We never see other people anyway, only the monsters we make of them.”
― Colson Whitehead, Zone One

“Sometimes a useful delusion is better than a useless truth.”
― Colson Whitehead, The Underground Railroad

“You swallow hard when you discover that the old coffee shop is now a chain pharmacy, that the place where you first kissed so-and-so is now a discount electronics retailer, that where you bought this very jacket is now rubble behind a blue plywood fence and a future office building. Damage has been done to your city. You say, ”It happened overnight.” But of course it didn’t. Your pizza parlor, his shoeshine stand, her hat store: when they were here, we neglected them. For all you know, the place closed down moments after the last time you walked out the door. (Ten months ago? Six years? Fifteen? You can’t remember, can you?) And there have been five stores in that spot before the travel agency. Five different neighborhoods coming and going between then and now, other people’s other cities. Or 15, 25, 100 neighborhoods. Thousands of people pass that storefront every day, each one haunting the streets of his or her own New York, not one of them seeing the same thing.”
― Colson Whitehead, The Colossus of New York

More from the Author: https://amzn.to/3PHz0Cq