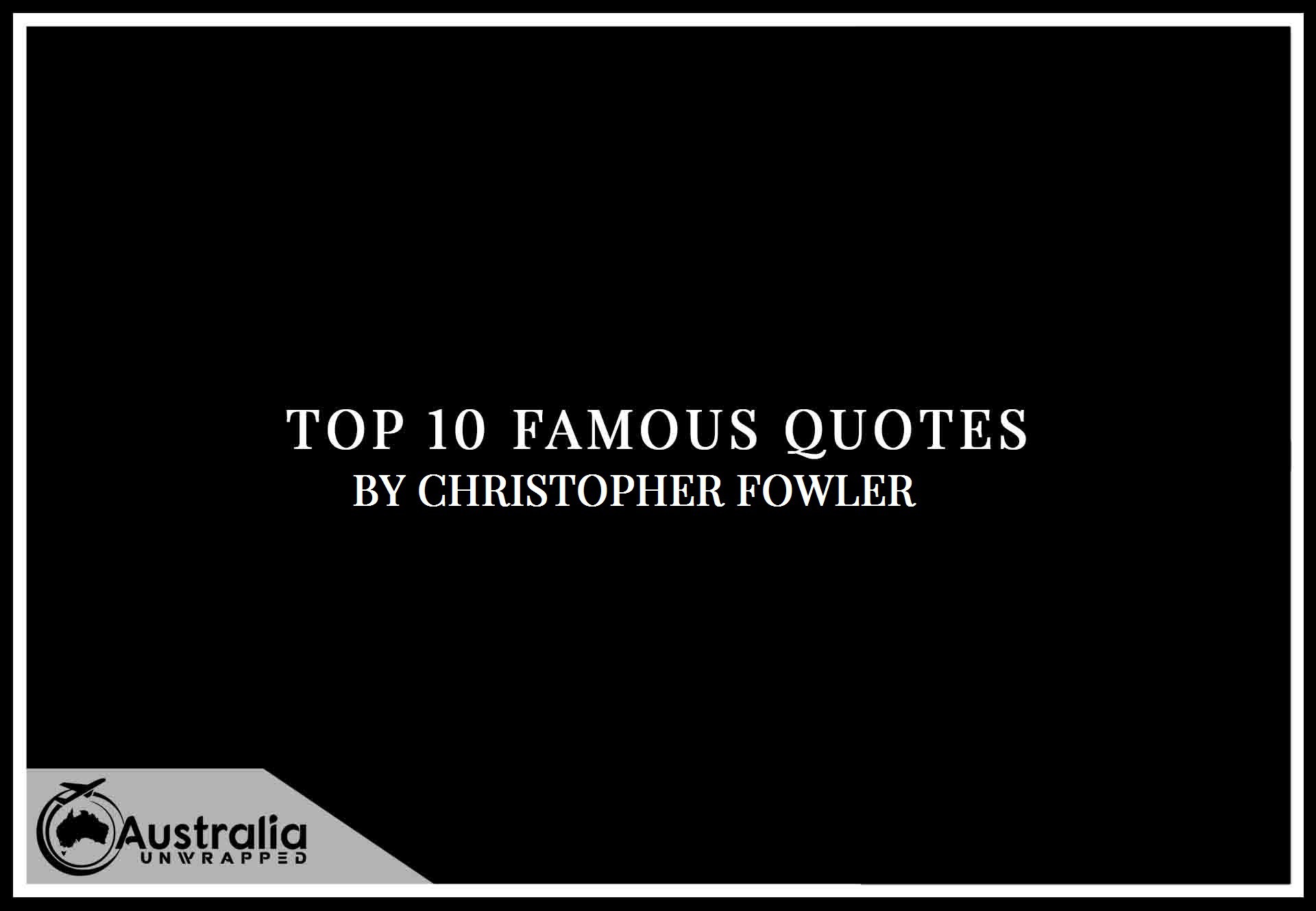 Love reading? Then it’s likely you will love a good quote from your favorite author. This article covers Christopher Fowler’s Top 10 Popular and Famous Quotes that we at Australia Unwrapped have collected from some of his greatest works. Christopher Fowler quotes to remember and here you will find 10 of the best. A memorable quote can stay with you and can be used along your journey. Choosing Christopher Fowler’s top 10 quotes is not easy, but here they are:

Christopher Fowler is an English novelist living in London whose books contain elements of black comedy, anxiety, as well as social satire. He also writes short stories, scripts, press articles, and reviews in addition to novels.

The author lives in King’s Cross, on the Battlebridge Basin, and he often chooses the backdrop of London as the setting for all of his stories, since any event in the city’s two thousand year history can provide him with inspiration for future stories

He was awarded the BFS Best Short Story Award in 1998 for ‘Wageslaves’, which was the short story he submitted to the competition. A few months later, in 2004, ‘The Water Room’ was nominated for the CWA People’s Choice Award, ‘Full Dark House’ won the BFS August Derleth Novel of the Year Award 2004 and ‘American Waitress’ won the BFS Best Short Story of the Year 2004. A novella called ‘Breathe’ was named the best novella of 2005 by the British Fantasy Society.

More from the Author: https://amzn.to/3T9tkE2

“Second hand bookshops are best visited alone and in the rain.”
― Christopher Fowler,  The Book of Forgotten Authors

“Statistics show that the nature of English crime is reverting to its oldest habits. In a country where so many desire status and wealth, petty annoyances can spark disproportionately violent behaviour. We become frustrated because we feel powerless, invisible, unheard. We crave celebrity, but that’s not easy to come by, so we settle for notoriety. Envy and bitterness drive a new breed of lawbreakers, replacing the old motives of poverty and the need for escape. But how do you solve crimes which no longer have traditional motives?”
― Christopher Fowler, Ten Second Staircase

“His bedroom was a reflection of Bryant’s mind, its untidy shelves filled with games and puzzles stacked in ancient boxes, statues and mementoes competing for space with books on every subject imaginable, from Sensation and Perception in the History of Experimental Psychology to Illustrated British Ballads and A History of Indian Philosophy.
“What are you reading at the moment?’ asked May.
“Batman,” said Bryant. “The drawings are terribly good.”
― Christopher Fowler, Seventy-Seven Clocks

“Do you enjoy reading?’ ‘I enjoyed Fifty Shades of Grey.’ Bryant quailed at the thought. ‘That’s not really reading, is it? More like staring at an assortment of words.’ ‘It is very popular.’ ‘So is taking photographs of your dinner for Facebook, but that doesn’t mean it adds to the total sum of human knowledge.”
― Christopher Fowler, Bryant & May and the Burning Man

“I hate the endless admonishments of a nanny state that lives in fear of its lawyers. While colonies of dim-witted traffic wardens swarm about looking for minor parking infringements, nobody seems to notice that our very social fabric is falling apart.”
― Christopher Fowler, Bryant & May Investigate the Victoria Vanishes

“It was true that the city could still throw shadows filled with mystifying figures from its past, whose grip on the present could be felt on certain strange days, when the streets were dark with rain and harmful ideas.”
― Christopher Fowler, Ten Second Staircase

“The true mark of English conversation is not being able to tell when you’ve been insulted. I think the more sophisticated society becomes, the more it hides behind the masks it manufactures.”
― Christopher Fowler, Bryant & May and the Memory of Blood

“Life is a very beautiful dream. I’m so glad I chose not to wake up from it just yet”
― Christopher Fowler, On the Loose

“She had a smile that could put a froth on a cup of coffee, and she knew it.”
― Christopher Fowler, Full Dark House

“Clutter, either mental or physical, is the sign of a healthy curiosity.”
― Christopher Fowler, The Memory of Blood

“When may did so, he found every cup and saucer, plate, vase, and bowl standing arranged across the floor like pieces in a scaled-up chess game.
“The Whitstable family tree,” Bryant explained, entering and setting down his tea tray. “It’s the only way I could get it sorted out in my head. I had to see them properly laid out, who was descended from whom.” He pointed to a milk jug. “Daisy Whitstable is bottom left-hand corner, by the fireguard. Next to her is the egg cup, brother Tarquin… Now, pass me Marion and Alfred Whitstable over there.”
“What’s their significance?”
“We need them to drink out of.”

More from the Author: https://amzn.to/3T9tkE2