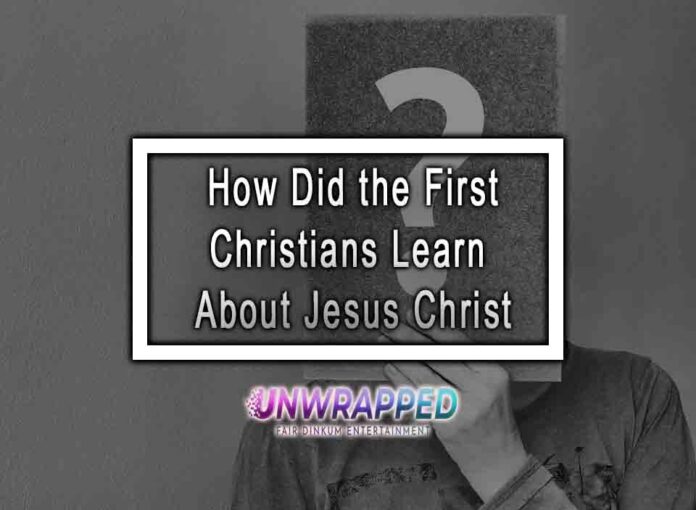 The believers were first called Christians at a place called Antioch. This is according to Luke in the book of Acts 11:26. The noun Christian was given to them because of how they lived they lived like Christ. The first Christians heard and learnt about Christ through different ways. In those times, there was no internet or print media hence one of the main mediums of communication was the word of mouth.

Not to Miss: Why Do People Say Jesus H Christ?

John was the first person to introduce Christ to the masses. After he had baptized him, he presented Christ to the people as the son of God, the Messiah. ‘One whom he ‘John’ could not untie his shoe laces’. (Matthew 3:1-16).

John’s ministry and teachings were so pivotal in the ministry of Jesus and the bring to faith of the first Christians. He set the pace for Christ and even sent his disciples to go and follow Jesus Christ after John’s execution (Mark 6).

The term apostle is used to refer to the twelve disciples who had walked with Jesus Christ in his ministry on earth. During the three years, they had heard Jesus teach various topics and seen him perform miracles. They also had the privilege to ask him questions away from the crowds (Matthew 13:10).

When Jesus was arrested, he was with his disciples praying in the garden of Gethsemane. They witnessed Christ’s death and saw him when he resurrected. After Jesus had appeared to them, he commissioned them to wait for the filling of the Holy Spirit before moving out to preach the gospel (Acts 1:1-3).

The apostles were the primary teachers of the gospel. They taught people about Christ starting with those in Judea, Jerusalem, Samaria and different parts of the world after they had dispersed (Acts 1:6).

When writing Ephesians, Apostle Paul documents that the first Christians were built upon the foundation of the apostles (Ephesians 2:19-20). This is to mean that the apostles passed on what they had learnt from Christ and about him to other people who letter became Christians.

The first Christians also learnt about Jesus Christ through sermons and preaching. When the apostles had gathered together in a room and received the promise of the Holy Spirit, they were bold enough to proclaim the good news about Jesus Christ.

In Acts 2:14-38, Peter the apostle stood and spoke boldly about Jesus Christ to a multitude of people who were amazed by them. He narrated the whole story of Jesus beginning from the Old Testament. He talked about Jesus’ Davidic lineage, his life, death and ascension. On that day more than three thousand people were born again.

Stephen, who was a disciple of Christ was arrested and charged of blasphemy before the Sanhedrin. When he was called upon to defend himself in Acts 7, Stephen spoke of Israel’s history and linked it up with the coming of Jesus Christ. This too helped the first Christians to learn more about Jesus Christ. The faith of the disciples led people to believe in Christ and eventually become Christians.

The story of the Ethiopian Eunuch is documented in Acts 8:29-38. This Ethiopian official was reading the book of Isaiah without understanding it. Philip, an apostle came by and helped him understand it then baptized him.

After his resurrection, Jesus Christ appeared to more than 500 people. These are referred to as the first hand witnesses of Jesus’ resurrection.

Apart from the 12 apostles, the first hand witnesses became so instrumental in teaching others about Jesus Christ.

Being an eye-witness to a scene was highly regarded. Their words were to be trusted and hence many people were converted and believed in the news about Jesus Christ through the eye-witnesses.

Enjoy This: What Happened On Mount Zion In The Bible?

The early church was well knit together. They loved one another genuinely and this kind of love is what attracted many more people to the Christian faith.

They gathered together in households and shared the word of God which enlightened them more about Christ. They shared their possessions with the needy people and ate together. Through such communities and places of fellowship, they got to learn more about Jesus Christ.

Acts 2:44-47 says, “And all that believed were together, and had all things common; And sold their possessions and goods, and parted them to all men, as every man had need. And they, continuing daily with one accord in the temple, and breaking bread from house to house, did eat their meat with gladness and singleness of heart, Praising God, and having favour with all the people. And the Lord added to the church daily such as should be saved.”

The apostles wrote letters and documented the story off Jesus Christ. These documentations were spread out to various parts of the world where people devoted themselves to studying them and learning more about Jesus.

The believers in Berea devoted themselves to the study of scripture (Acts 17:10-11). Through the studying of the scriptures, the early Christians learned about Jesus Christ.

The Jews were so keen on signs and miracles (1st Corinthian 1:22). It was hard to convince a Jew without a physical sign or a miracle.

Most Jews were converted to faith after witnessing the many miracles that were performed by Jesus Christ during his life on earth and the apostles later on.

It is through such miracles that many came to believe that Jesus is the Messiah and learnt much more about him.

Read More: How Did the Apostles of Jesus Christ Die?

Stay Connected
41,936FansLike
5,684FollowersFollow
867FollowersFollow
Previous article
How Did the Apostles of Jesus Christ Die?
Next article
What Did Jesus Really Look Like?

Bible Verses About Loving Everyone No Matter What