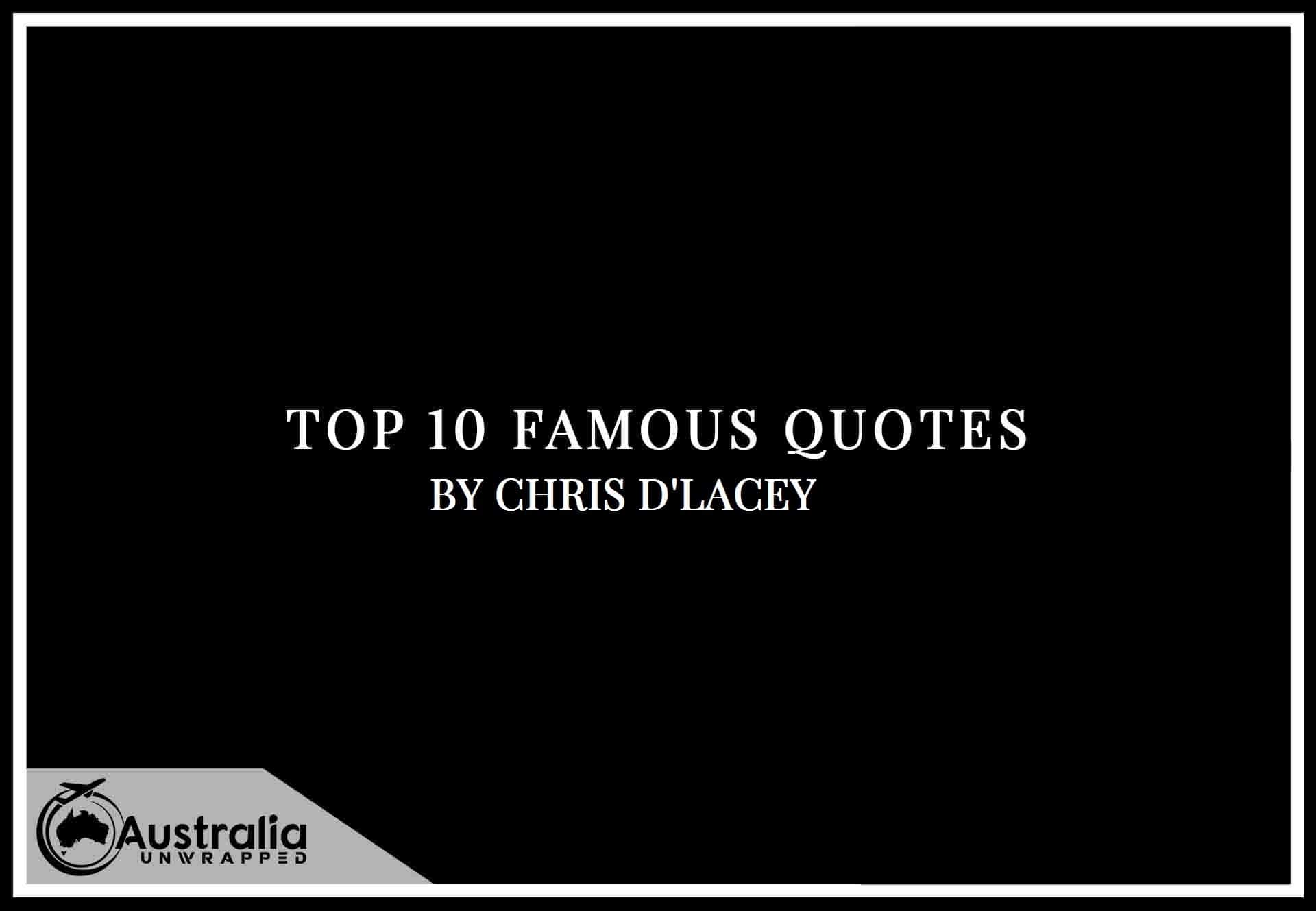 Quotes, who doesn’t love a good quote? This series of articles we look at Top 10 Famous Quotes by Author Chris d’Lacey, author quotes are always a challenge and fun to pick, with Chris d’Lacey you will find my Ten favorites of Chris d’Lacey’s quotes.

His series The Last Dragon Chronicles have sold nearly four million copies worldwide, and he writes books for children of all ages. He likes dragons. His latest series, Erth Dragons, begins with The Wearle, book one. That is indeed VERY dragony. Fans of the supernatural might enjoy his UNICORNE Files series, a kind of ‘X-Files’ for kids. The first book is titled A Dark Inheritance.

Chris’s early ambition was to be a songwriter, and he began writing fiction in his early thirties. He began with a gentle story about Christmas that grew to a 250,000-word saga of polar bears. He still has to take it out of his ‘bottom drawer’. Eventually, he started writing bizarre short stories that were published in various small press magazines. When a friend suggested that he enter a competition to write a tale for nine-year-olds, he had no plans to try writing children’s fiction. His story didn’t win the contest, but a publisher picked it up off a slush pile. He has now devoted himself exclusively to children’s fiction and has published some thirty books, many of which have been translated. His first children’s novel, ‘Fly, Cherokee, Fly,’ was highly commended for the Carnegie Medal.

The University of Leicester (where he worked for twenty-eight years as a scientist of sorts) awarded him an honorary doctorate in July 2002 for his contributions to children’s fiction. As a full-time writer, he regularly visits schools, libraries, and book festivals. Living in Devon, England, he enjoys staring at the sea and playing the ukulele. As well as writing middle grade fiction, he has also written young adult fiction under the pseudonym ‘Vincent Caldey’. It is very difficult to find his one book under that name, ‘A Good Clean Edge’. There is no mention of dragons in its pages.

More from the Author: https://amzn.to/3dVJelm

“I’m under strict instructions to write a happy ending. Rule number ninety-seven: You’re not allowed to make a dragon cry.”
“Right,” Said Sophie, starting the engine. “Tears might quench their fire.”
― Chris d’Lacey, The Fire Within

“He tried. He really did. For a good ninety seconds he molded the clay as best he could. His final effort came out resembling a pear.”
― Chris d’Lacey, Fire Star

“It looked very similar to the screwdriver used by the time-traveling hero of the dragons’ favorite television program.”
― Chris d’Lacey, The Fire Eternal

“You know, I preferred you as an evil monk. Would have made killing you a whole lot easier.”
― Chris D’ Lacey

“Why can’t I talk to her?”
“Because you’re not a handsome young man.”
“Well, neither is he!”
― Chris d’Lacey, The Fire Within

“The more we nurture the planet, the better and more natural a life we’ll have.”
― Chris d’Lacey, Icefire

“Stories have a unique power, David. The Inuit believe they can capture souls.”
― Chris d’Lacey, Icefire

“Learn a little patience. You never know what might be around the corner.”
― Chris d’Lacey, The Fire Within

“What you take from the earth, you must give back. That’s nature’s way.”
― Chris d’Lacey, The Fire Within

….Until the stars have blinked their last
Wherever on this earth you walk
He will arouse, excite, inspire,
My Valentine, my one dark fire…….
”

More from the Author: https://amzn.to/3dVJelm