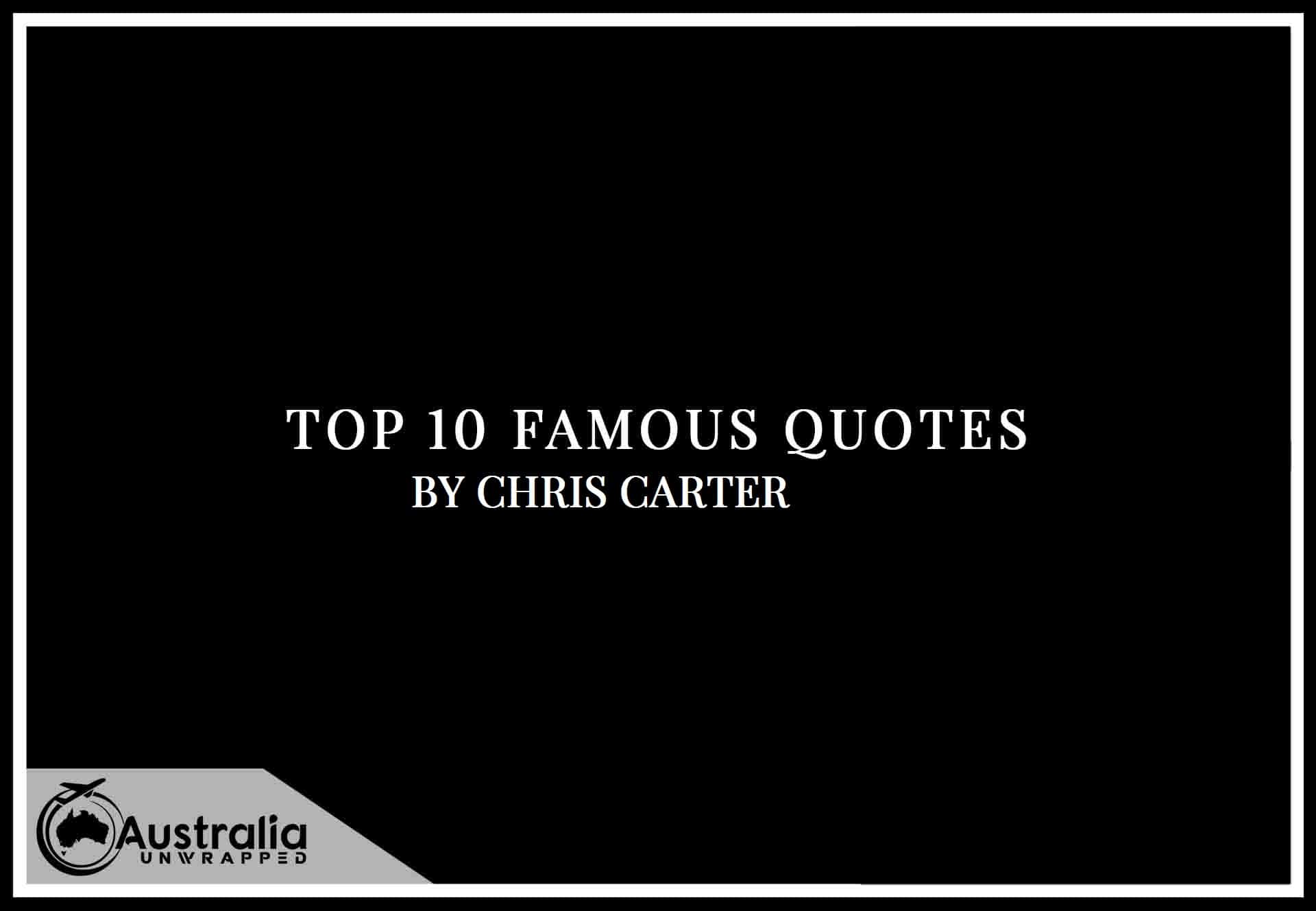 Quotes, who doesn’t love a good quote? This series of articles we look at Top 10 Famous Quotes by Author Chris Carter, author quotes are always a challenge and fun to pick, with Chris Carter you will find my Ten favorites of Chris Carter’s quotes.

Originally from Brazil, Chris Carter studied psychology and criminal behaviour at the University of Michigan, where he was born and raised. He served as a member of the Michigan State District Attorney’s Criminal Psychology Team, where he interviewed and studied a wide range of criminals, including serial and multiple homicide offenders with life sentences. Having moved to Los Angeles in the early 1990s, Chris spent ten years working as a guitarist for many Glam Rock bands before leaving the music business to concentrate on writing full-time. As of now, he lives in London.

More from the Author: https://amzn.to/3CwCp3V

“When reality becomes too senseless to make sense, the human mind will sometimes create its own”
― Chris Carter

“I think that you appreciate that there are extraordinary men and women and extraordinary moments when history leaps forward on the backs of these individuals, that what can be imagined can be achieved, that you must dare to dream, but that there’s no substitute for perseverance and hard work and teamwork because no one gets there alone; and that, while we commemorate the… the greatness of these events and the individuals who achieve them, we cannot forget the sacrifice of those who make these achievements and leaps possible.”
― Chris Carter

“He’s my new partner JJ and I don’t think he likes you very much. Last guy he took a dislike to still can’t eat anything more solid than yogurt.’

‘Sure I can. The leash is in the car. I’ll go get it. You guys will be OK by yourselves for ten minutes or so, right?”
― Chris Carter, The Crucifix Killer

“The nightmares were so devastating that as a self-defense mechanism his brain did all it could to keep him awake at night. Instead of falling asleep, Hunter read ferociously. Books became his refuge, his castle. A safe place where the ghastly nightmares couldn’t breach the gates.”
― Chris Carter, One by One

“Hunter let go of JJ who started dusting his jacket with both hands. ‘Look at what you’ve done to my suit man, these things don’t come cheap you know.’

Garcia checked his pocket change. ‘Here.’ He extended his hand towards JJ. ‘A dollar ninety-five. Go buy another one.”
― Chris Carter, The Crucifix Killer

“Fuck you! Someone has tortured and killed one of your girls and you couldn’t give a damn? I thought you were supposed to protect them, to be their guardian. Isn’t that what pimps do?’ Garcia’s face flared red.”
― Chris Carter, The Crucifix Killer

“Interpretation is directly related to a person’s frame of mind. Looking at the same image, a person could see two different things depending on the mood that person is in at the time.”
― Chris Carter, The Death Sculptor

“Really? We always have a choice, do we? What about the choices that other people make that end up completely changing your life, not theirs? Where is our choice there, then?”
― Chris Carter, One by One

“What makes you think I’d know this woman?’

‘Whatever.”
― Chris Carter, The Crucifix Killer

“To start with, the overwhelming majority of serial killers are male,’ Hunter explained. ‘Female serial killers have a tendency to kill for monetary profit. While that can also be true their male counterparts, it’s very unlikely. Sexual reasons top the list for male serial killers. Case studies have also shown that female killers generally kill people close to them, such as husbands, family members, or people dependent on them. Males kill strangers more often. Female serial killers also tend to kill more quietly, with poison or other less violent methods, like suffocation. Male serial killers, on the other hand, show a greater tendency to include torture or mutilation as part of the process of killing. When women are implicated in sadistic homicides, they’ve usually acted in partnership with a man.”

More from the Author: https://amzn.to/3CwCp3V