China and Its Impact on Australia – Good or Bad relationship? 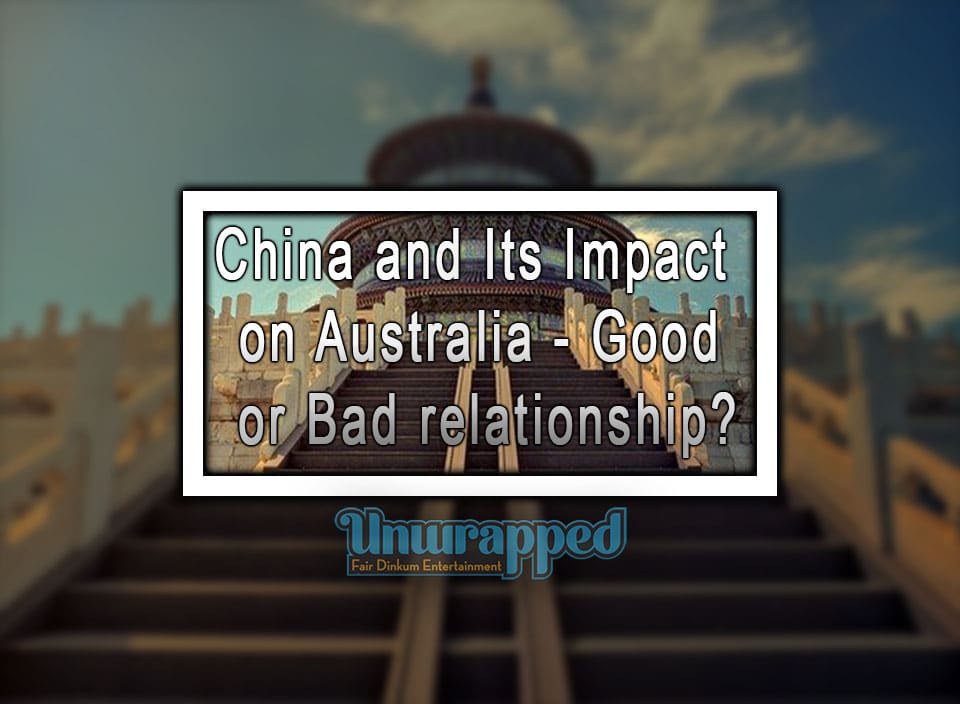 China and Its Impact on Australia – At What Cost?

China and its impact on Australia – China’s consistently growing economy over the decades have now outpaced the United States as the world’s leader in GDP in terms of purchase price parity, coming in second to the USA in GDP per capita. Owing to market reforms that have been staged from the 1970s, China’s now consistently growing economy is a force to be reckoned with. The transformation of this previously centralized trading country to one of the world’s undisputed superpowers has been felt by countries all over the world, and Australia is no exception.

Currently, China is Australia’s largest export destination. According to supplementary data on international trade in services released by the Australian Bureau of Statistics (ABS), China receives close to 30% of Australia’s total exports. Further, products from China compose Australia’s largest imports at 25% of the total. Products such as textiles and machinery mainly comprise Australia’s imports from China. On the other hand, Australia is China’s fifth-largest supplier of imports and is the tenth largest consumer of China’s exports. It is quite clear that Australia and China have strong economic ties. The signing of the Free Trade Agreement between Australia and China seeks to strengthen the trade ties between the two countries further. This is particularly true for Australia, whose agricultural goods will attract no tariffs when entering China. The absence of trade tariffs will lead to increased exports to China, yielding a greater revenue. Furthermore, Australians will be allowed to take part in industries such as Insurance within China, fields that were previously inaccessible to them.

China’s building program, coupled with its infrastructural boom led to increased demand for raw materials. This resulted in increased exports from Australia to China, mainly from coal and iron ore. Increased exports led to an increase in revenue and employment opportunities in related fields. Further, the Chinese demand for raw materials that are provided by Australia has led to significant economic growth in various sectors such as the mining industry. Development of infrastructure to cater to this trade has also occurred, with the expansion of ports as one of its indicators.

The expenditure of tourists from China within Australia has also observed an increase, from 4.5 billion AUD in 2013 to 5.2 billion AUD in 2014, a 16% increase. This serves as a significant boost for Australia’s service and hospitality industry.

China has also invested heavily in Australian businesses, with its largest areas of investment being agriculture, resources, and residential housing. Fields such as manufacturing and mineral exploration have also seen a significant investment from China. These investments have led to increased employment opportunities for the locals as well as increased revenue.

With China’s infrastructural boom slowing down over the recent past, more personnel will be required in the fields of expertise, transformed manufactures and services. With Australia’s well-organized staff in the fields of social security, education services, and health administration, Australia can easily contribute in towards China’s more societal development. It can also contribute to China’s banking and finance sectors, previously having advised in urban development and health financing.

China has had an elaborate an enormous impact on Australia, thus the future seems bright for the economic ties between these two countries as we move further into 2017.