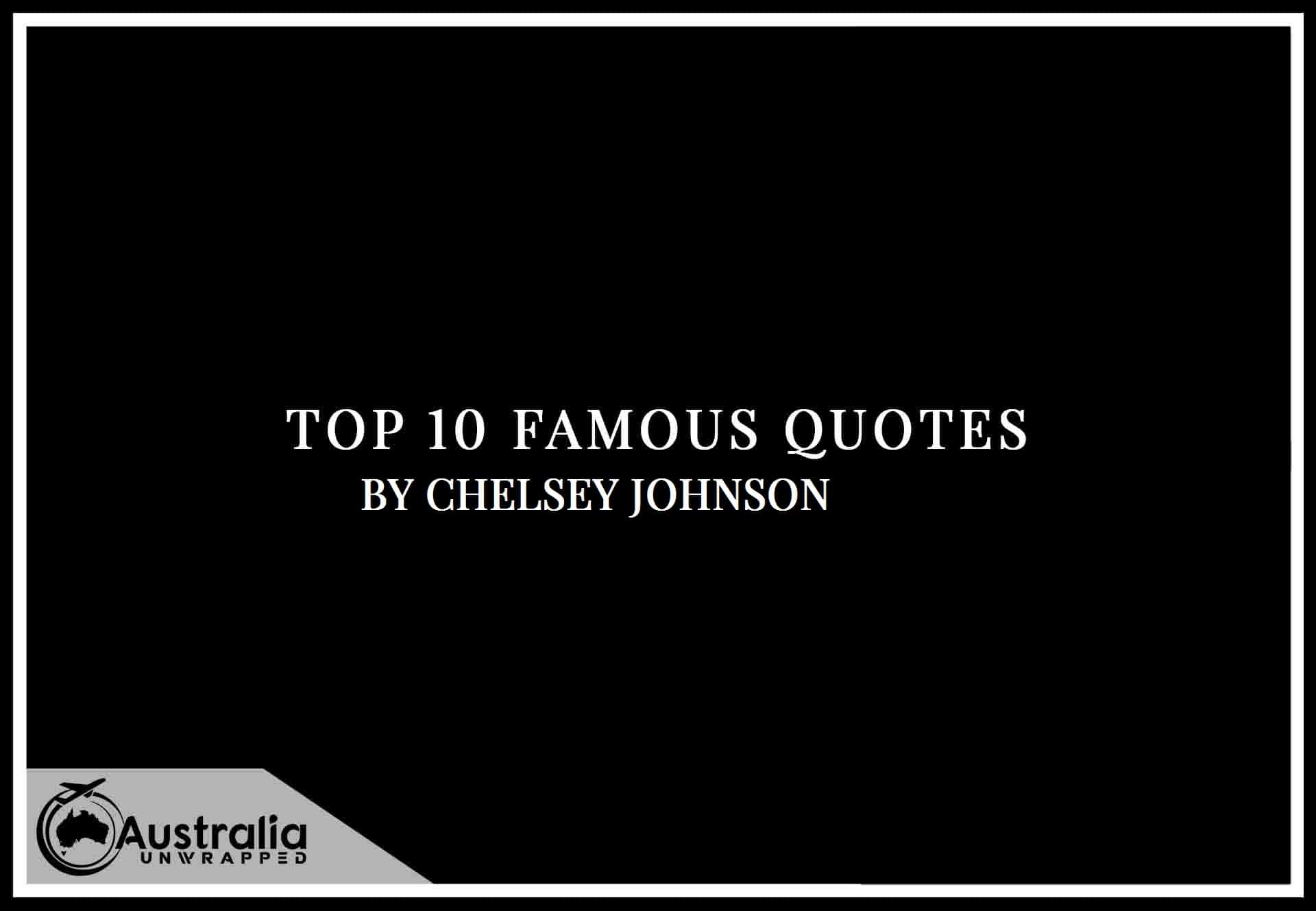 Chelsey Johnson, a writer whom I am guessing you love? Here are our 10 best Chelsey Johnson quotes for you to enjoy. At Australia Unwrapped we believe every book has at least one quotable line, and our mission is to find them all. Here you will find Chelsey Johnson’s top 10 popular and famous quotes. Like every good writer Chelsey Johnson made a number of memorable quotes, here are some of our favorites:

Chelsey Johnson is a writer and essayist whose short stories have appeared in Ploughshares, One Story, Ninth Letter, The Rumpus, as well as NPR’s Selected Shorts, among others. She is the author of Stray City (Custom House/HarperCollins, 2018), as well as accounts of New York City. As a graduate of the Iowa Writers’ Workshop, she received a MFA in fiction as well as a Stegner Fellowship from Stanford University. She is the author of her first novel, Stray City.

More from the Author: https://amzn.to/3TxFE1h

“Of course I’ll be fine. I am fine.’ Fine was the loneliest place a person could be.”
― Chelsey Johnson, Stray City

“We all have our coming-out story, or why-we-haven’t-come-out story. More precisely, we have two. There’s the official version, paragraph-sized for conversation, for when it comes, usually on level-two get-to-know-you with friends and dates and curious coworkers. That one covers the basics; when, where, how, the end. You will tell it again and again over the course of your life, polishing it to a fine sheen, until it’s as close to frictionless as you can get it. Then there’s the real story, the full version, which you tell only a handful of people ever – even if you’re one of the lucky ones with a good family, with loving parents who eventually accept you. Because, as Lawrence once said, when the only time you’ve seen your dad cry is at a funeral, what does that mean about you?”
― Chelsey Johnson, Stray City

“It’s the gays who say, We are everywhere, but straightness really was everywhere. The world was sodden with it. Versions of the relationship I was now in played out in everything ever written, acted, sung, sold, declared. The abundance of representation dizzied me. There was so much written and sold about the love and trouble between men and women that if you lined it all up end to end the whole world would be wrapped as thickly and totally as a rubberband ball.”
― Chelsey Johnson, Stray City

“For the first time I understood why queer people changed their names. It was about more than trying to be different or weird, though maybe it was a little bit that, to go by Tiger or Ace or Ponyboy or Dirtbag or whatever, my
future girlfriend Flynn adding the F to her name. The name they gave you belongs
to someone else, their invention of you; if you turn out not to be that person, you have to name yourself.”
― Chelsey Johnson, Stray City

“But then there was school and work and the doctor and the dentist and the Internet. There she was not a parent but a mom, a species held in somber, near-spirtual regard while for all practical purposes steadily crushed by the forces of public policy, like the American bison.”
― Chelsey Johnson, Stray City

“I seldom even thought of myself as woman or girl, just person. Just human. I only became girl or woman when men walked into the room or I walked into theirs, when that gaze hit me like a hot breath. As a woman you walked in and we’re assessed, ignored, or both.”
― Chelsey Johnson, Stray City

“I could have told her then, as we walked down Northwest Fifth toward the car. Or on the ride home. But what was the point? There were things even your closest friends didn’t need or want to know.”
― Chelsey Johnson, Stray City

“All I knew that for all our art, for all our writing, for all our self-defense workshops, for all our banding together in our cities and oases, queer survival was still not guaranteed.”
― Chelsey Johnson, Stray City

“The name they gave you belongs to someone else, their invention of you; if you turn out not to be that person, you have to name yourself.”
― Chelsey Johnson, Stray City

“Why should citizenship depend on one exclusive form of a relationship? What about love between friends, community, love of work?”
― Chelsey Johnson, Stray City

“Still, when I went back home I searched my father’s face for what I thought was Mexican-ness, something still visible in him but diluted in me. I had his mouth, his brown eyes, but my skin was lighter. My hair was fine and dark brown, while his was thick and silvering at the temples. What was I looking for, though? Who knew how much of his ancestry, and thus mine, was indigenous and how much European? I realized I was seeking a trace of purity, as if such a thing existed – as if one’s roots could be a single clean bright plunge like a carrot, instead of the complicated dirty tangle that most of us actually had. Essentialist was an accusation my friends and classmates had flung around liberally in arguments, yet secretly maybe we all wanted it for ourselves in some way or another – to have an essence. To be an identity.”
― Chelsey Johnson, Stray City

More from the Author: https://amzn.to/3TxFE1h