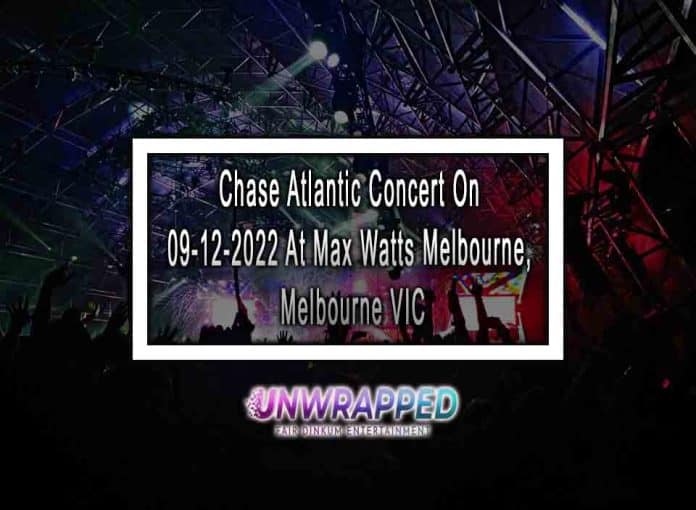 Fans of CHASE ATLANTIC are celebrating today’s big news by returning home for a December headlining tour of Australia and New Zealand. The group of astronomical proportions, who are Australian-born and residing in Los Angeles, will begin their tour in Melbourne on 9 Dec and make stops in Sydney, Brisbane, and Auckland on December 15, 16, and 17. (21 Dec). The public may purchase tickets on Thursday, 30 Jun at 12 pm local time. Members of My Live Nation get priority access to tickets from Tuesday, 28 Jun, at 11 am, through Thursday, 30 Jun, at 11 am. Please visit either livenation.com.au or LiveNation.co.NZ for a detailed tour and ticket information.

Chase Atlantic blurs the lines between genres via bold experimentation and natural melodic tendencies, serving as the missing connection between sedated hazy trap, nocturnal R&B, and psychedelically spun alternative. The trio courageously pushes ahead on their upcoming debut for Fearless Records after amassing over 200 million streams and winning praise from Billboard, OnesToWatch, mxdwn, PopCrush, and Alternative Press, Substream Magazine, and Rock Sound, for which they graced the cover.

The alternative R&B, trap-infused, synth-rock group has a sizable fan base; their tracks “Swim,” “Friends,” and “Into It” have all had more than 200 million Spotify streams combined. In Melbourne, Sydney, and Brisbane, Chase Atlantic, who published their third album titled “Beauty In Death,” will perform as the opening act. Chase Atlantic is among the greatest names in contemporary music, having headlined tours of the US, the UK, and Europe, performed at sold-out venues like Webster Hall in New York and The Regent Theatre in Los Angeles, as well as at the Bonnaroo, Lollapalooza, and Reading & Leeds Festivals. Keep an eye out for these tickets.

According to the band, Chase Atlantic’s distinctive kind of music is “conjured up dark alternative pop accentuated by rock and R&B.” Their musical style has evolved over four years of recording songs, moving from an alternative/pop to a more alternative/R&B sound. They combine R&B, rock, pop, and alternative music, and many musicians from those genres, such as Tame Impala and the Weeknd, have impacted them. The 1975 and the Neighbourhood were musical influences on Chase Atlantic.

Australian alternative R&B group Chase Atlantic, based in Cairns, Queensland, often styled as CHASE ATLANTIC, was founded in 2014. There are five people in the group: Jesse Boyle, Christian Anthony, Clinton Cave, Patrick Wilde, and Mitchel Cave. Chase Atlantic has released seven EPs and three albums. Christian Anthony and Mitchel Cave played together in the boy band What About Tonight.

The band was created to serve as an audition for season four of The X Factor Australia, but they were removed in week two after placing tenth. Clinton Cave, Mitchel Cave’s older brother, has a popular YouTube channel called Clinton Cave Music, where the brothers often released cover songs. The three members of KIDS (Kind Imaginations. Destructive Situations) played together for the first time in 2013 and released the original song “Addicted.”