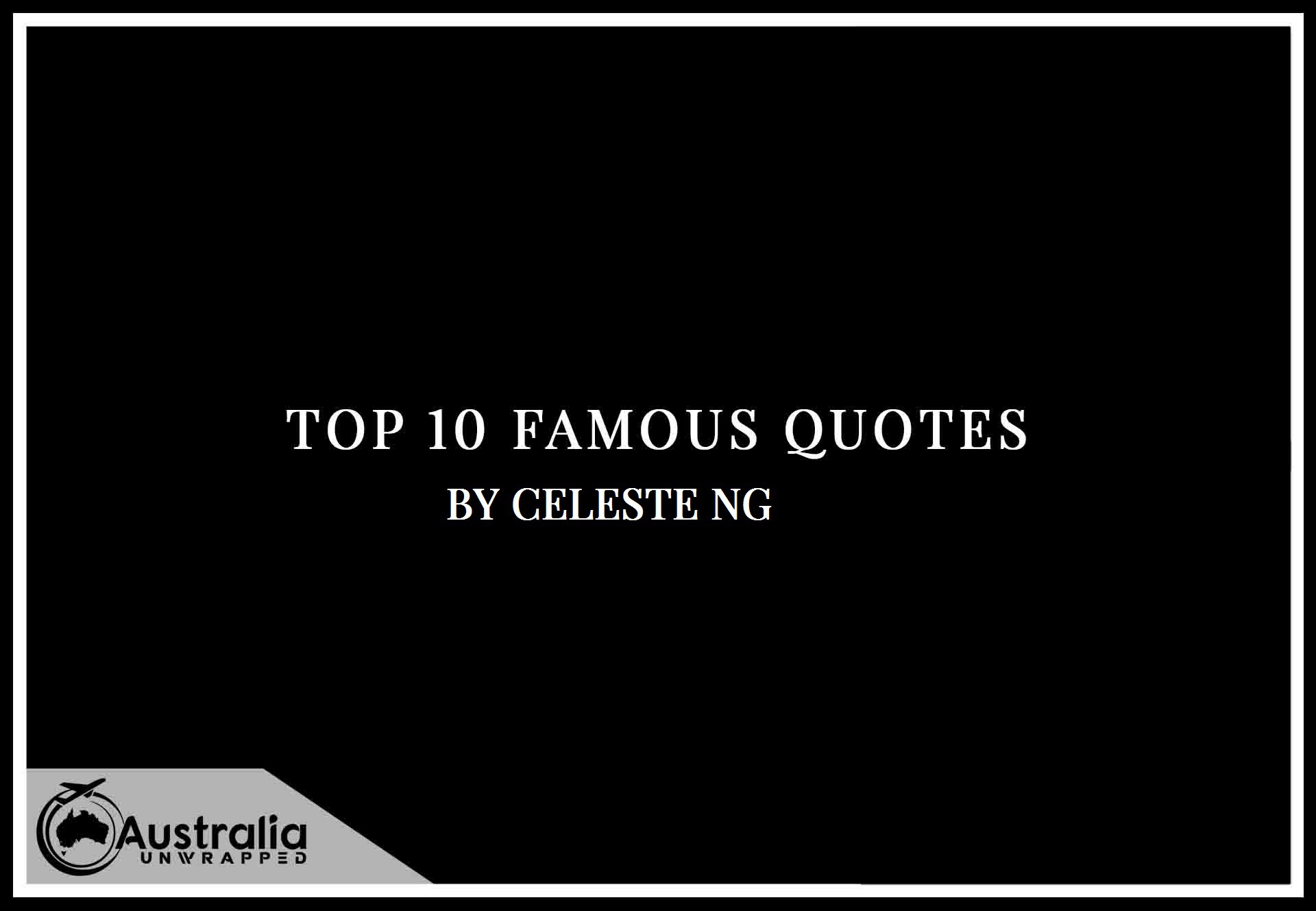 Quotes, who doesn’t love a good quote? This series of articles we look at Top 10 Famous Quotes by Author Celeste Ng, author quotes are always a challenge and fun to pick, with Celeste Ng you will find my Ten favorites of Celeste Ng’s quotes.

Celeste Ng is the author of Everything I Never Told You, a New York Times bestseller, a New York Times Notable Book of 2014, Amazon’s #1 Best Book of 2014, and a best book of the year in over a dozen publications. Aside from winning the Massachusetts Book Award, the Asian/Pacific American Award for Literature, the ALA’s Alex Award, and the Medici Book Club Prize, Everything I Never Told You was a finalist for several awards, including the Ohioana Award, the John Creasey (New Blood) Dagger Award, and the VCU Cabell First Novelist Award.

Celeste grew up in Pittsburgh, Pennsylvania, and Shaker Heights, Ohio, in a scientific family. She graduated from Harvard University and earned an MFA from the Helen Zell Writers’ Program at the University of Michigan. Among her publications are One Story, TriQuarterly, Bellevue Literary Review, the Kenyon Review Online, and others, and she has been nominated for the Pushcart Prize.

At the moment, she resides in Cambridge, Massachusetts, where she works as a teacher. The second book in her series, Little Fires Everywhere, will be published by Penguin Press in the fall of this year.

More from the Author: https://amzn.to/3AYVlXU

“What made something precious? Losing it and finding it.”
― Celeste Ng, Everything I Never Told You

“To a parent, your child wasn’t just a person: your child was a place, a kind of Narnia, a vast eternal place where the present you were living and the past you remembered and the future you longed for all at the same time. You could see it every time you looked at her: layered in her face was the baby she’d been and the child she’d become and the adult she would grow up to be, and you saw them all simultaneously, like a 3-D image. It made your head spin. It was a place you could take refuge, if you knew how to get in. And each time you left it, each time your child passed out of your sight, you feared you might never be able to return to that place again.”
― Celeste Ng, Little Fires Everywhere

“All her life, she had learned that passion, like fire, was a dangerous thing. It so easily went out of control. It scaled walls and jumped over trenches. Sparks leapt like fleas and spread as rapidly; a breeze could carry embers for miles. Better to control that spark and pass it carefully from one generation to the next, like an Olympic torch. Or, perhaps, to tend it carefully like an eternal flame: a reminder of light and goodness that would never – could never – set anything ablaze. Carefully controlled. Domesticated. Happy in captivity. The key, she thought, was to avoid conflagration.”
― Celeste Ng, Little Fires Everywhere

“One had followed the rules, and one had not. But the problem with rules… was that they implied a right way and a wrong way to do things. When, in fact, most of the time they were simply ways, none of them quite wrong or quite right, and nothing to tell you for sure what side of the line you stood on.”
― Celeste Ng, Little Fires Everywhere

“Sometimes you need to scorch everything to the ground, and start over. After the burning the soil is richer, and new things can grow. People are like that, too. They start over. They find a way.”
― Celeste Ng, Little Fires Everywhere

“The things that go unsaid are often the things that eat at you–whether because you didn’t get to have your say, or because the other person never got to hear you and really wanted to.”
― Celeste Ng, Everything I Never Told You

“Most of the time, everyone deserves more than one chance. We all do things we regret now and then. You just have to carry them with you.”
― Celeste Ng, Little Fires Everywhere

“Before that she hadn’t realized how fragile happiness was, how if you were careless, you could knock it over and shatter it.”
― Celeste Ng, Everything I Never Told You

“It came, over and over, down to this: What made someone a mother? Was it biology alone, or was it love?”
― Celeste Ng, Little Fires Everywhere

“You never got what you wanted; you just learned to get by without it.”
― Celeste Ng, Everything I Never Told You

“Parents, she thought, learned to survive touching their children less and less. As a baby Pearl had clung to her; she’d worn Pearl in a sling because whenever she’d set her down, Pearl would cry. There’d scarcely been a moment in the day when they had not been pressed together. As she got older, Pearl would still cling to her mother’s leg, then her waist, then her hand, as if there was something in her mother she needed to absorb through the skin. Even when she had her own bed, she would often crawl into Mia’s in the middle of the night and burrow under the old patchwork quilt, and in the morning they would wake up tangled, Mia’s arm pinned beneath Pearl’s head, or Pearl’s legs thrown across Mia’s belly. Now, as a teenager, Pearl’s caresses had become rare—a peck on the cheek, a one-armed, half-hearted hug—and all the more precious because of that. It was the way of things, Mia thought to herself, but how hard it was. The occasional embrace, a head leaned for just a moment on your shoulder, when what you really wanted more than anything was to press them to you and hold them so tight you fused together and could never be taken apart. It was like training yourself to live on the smell of an apple alone, when what you really wanted was to devour it, to sink your teeth into it and consume it, seeds, core, and all.”

More from the Author: https://amzn.to/3AYVlXU