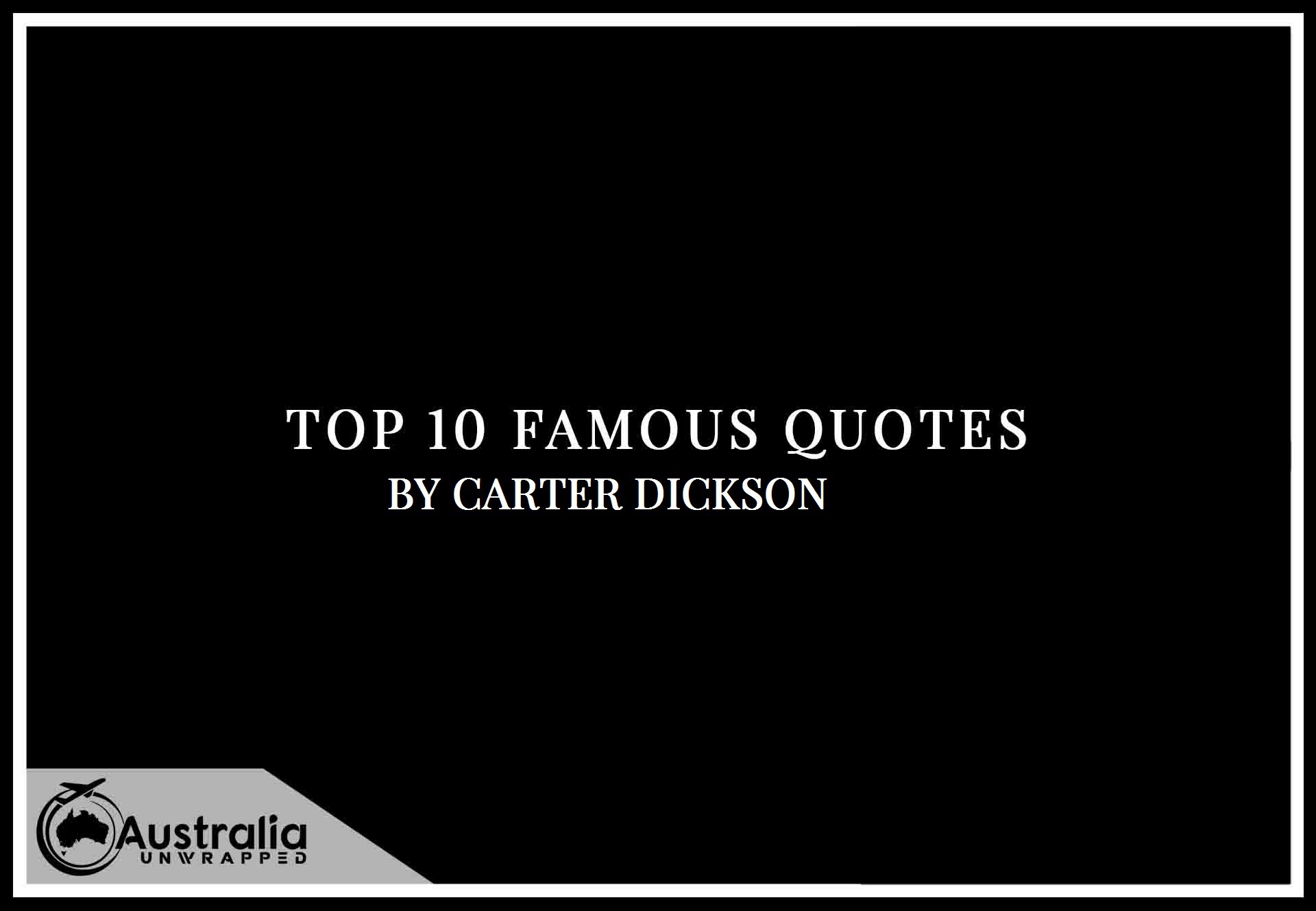 Carter Dickson, a writer whom I am guessing you love? Here are our 10 best Carter Dickson quotes for you to enjoy. At Australia Unwrapped we believe every book has at least one quotable line, and our mission is to find them all. Here you will find Carter Dickson’s top 10 popular and famous quotes. Like every good writer Carter Dickson made a number of memorable quotes, here are some of our favourites:

“Though the pictured face was floridly coloured, you suspected pallor; a mind lightly balanced, and liable to snap from sheer weight of dreams.”
― Carter Dickson,  The Red Widow Murders

“There’s the pity of it. Elaine Cheeseman’s not as young as you; she’s forty, maybe. But she’s not bad-looking at all. If she took the trouble to dress properly, and occasionally she smiled instead of keeping a frozen, holy-zeal look as though she were goin’ to the Crusades instead of only to the polling-station, she might even be a bit of a smasher.”
― Carter Dickson, The Cavalier’s Cup

“I never met a gal who represented a mystery to me in quite the fetchin’ way you did. It’d be dull and dreary just to find out how a crook got in and out of a locked room to steal a gold-and-jewelled cup. But it’s very rummy, and fascinates the old man a bit, to wonder why a crook didn’t steal a gold-and-jewelled cup he should have stolen.”
― Carter Dickson, The Cavalier’s Cup

“Put it in terms of the not-too-serious, if you like. Who got into that locked room? And how was it done? And why should the cup have been moved again? We’re up against the essential detective problems of who, how, and why. Simply because there was no murder or near-murder, does that make the mystery one bit less baffling?”
― Carter Dickson, The Cavalier’s Cup

“That sounds silly, doesn’t it? Running away just because you don’t want to hurt somebody’s feelings? But did you ever think how much of our lives we spend,dodging and twisting and making things difficult for ourselves, to avoid hurting somebody’s feelings. Even people with absolutely no claim on us?”
― Carter Dickson, The Curse of the Bronze Lamp

“That’s the point. If these Labour MP’s were really working men, they’d have some sense. But most of ’em, or at least the ones I’ve met, seem to be half-baked intellectuals who’ve specialized in economics or some such dreary muck.”
― Carter Dickson, The Cavalier’s Cup

“When a man can’t sleep, he won’t let anybody else sleep either. If he doesn’t go off to dreamland the moment his head hits the pillow, he gets frightfully annoyed and won’t stay in bed.”
― Carter Dickson, The Cavalier’s Cup

“Sometimes it seems that men–yes, and even women too!–if they believe in a thing strongly enough, they get a strength or endurance that they wouldn’t have believe possible.”
― Carter Dickson, The Cavalier’s Cup

“But the curator said nothing mattered so long as it looked all right to the ignorant.” [Lady Brace]
“Sort of government motto. I see.” [Sir Henry Merrivale]”
― Carter Dickson, The Cavalier’s Cup

“Not that anybody cares two pins about history in these days.We’ve got rid of history; history is all my eye. But I’ve got to tell you the facts.”
― Carter Dickson, The Cavalier’s Cup

Quotes for all, here you found our selection of 10 Carter Dickson quotes. Make sure you help by commenting your best Carter Dickson quote below and sharing our favourite authors so we can look them up, read some of their works and give you the best quotes we can find. We hope you enjoyed our top 10 quotes by Carter Dickson. However, feel free to comment below if you disagree or would like to include some other great and memorable Carter Dickson quotes in our list.

“…both Tom and I adore detective stories. Isn’t that so, Tom?” [Lady Brace]
“Right!” agreed her husband….”But they’ve got to be proper detective stories. They’ve got to present a tricky, highly sophisticated problem, which you’re given fair opportunity to solve.”
“And,” amplified Virginia, “no saying they’re psychological studies when the author can’t write for beans.”
“Correct!” her husband agreed again. “Couldn’t care less when you’re supposed to get all excited as to whether the innocent man will be hanged or the innocent heroine will be seduced. Heroine ought to be seduced; what’s she there for? The thing is the mystery. It’s not worth reading if the mystery is simple or easy or no mystery at all.”
― Carter Dickson, The Cavalier’s Cup