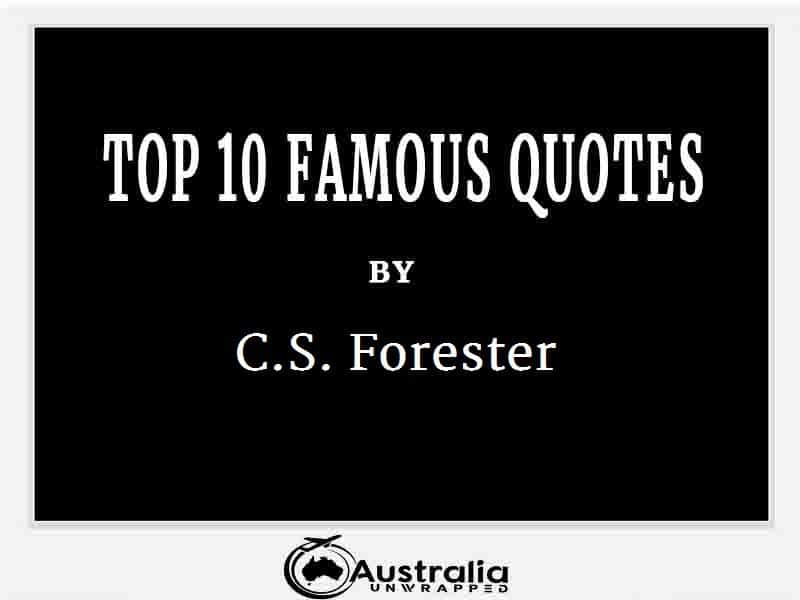 Love reading? Then it’s likely you will love a good quote from your favourite author. This article covers C.S. Forester’s Top 10 Popular and Famous Quotes that we at Australia Unwrapped have collected from some of his greatest works. C.S. Forester quotes to remember and here you will find 10 of the best. A memorable quote can stay with you and can be used along your journey. Choosing C.S. Forester’s top 10 quotes is not easy, but here they are:

“Happy is the bride the sun shines on.”
― C. S. Forester Hornblower and the Hotspur

“Bush put both arms round Hornblower’s shoulders and walked with dragging feet. It did not matter that his feet dragged and his legs would not function while he had this support; Hornblower was the best man in the world and Bush could announce it by singing ‘For He’s a Jolly Good Fellow’ while lurching along the alleyway.”
― C.S. Forester, Lieutenant Hornblower

“I did not ask for objections, but for comments, or helpful suggestions. I looked for more loyalty from you, Captain Hornblower.’

That made the whole argument pointless. If Leighton only wanted servile agreement there was no sense in continuing…”
― C.S. Forester, Ship of the Line

“Hornblower bowed to Lady This and Lady That, to Lord Somebody and to Sir John Somebody-else. Bold eyes and bare arms, exquisite clothes and blue Garter-ribbons, were all the impressions Hornblower received.”
― C.S. Forester, Flying Colours

“The material came bubbling up inside like a geyser or an oil gusher. It streamed up of its own accord, down my arm and out of my fountain pen in a torrent of six thousand words a day.”
― C.S. Forester

“…irresponsibility was something which, in the very nature of things, could not co-exist with independence.”
― C.S. Forester, Commodore Hornblower

“I thank God daily for the good fortune of my birth, for I am certain I would have made a miserable peasant.”
― C.S. Forester, Mr. Midshipman Hornblower

“They were setting off on an adventure, and Hornblower was only too conscious that it was his own fault.”
― C. S. Forester

“When a man who is drinking neat gin starts talking about his mother he is past all argument.”
― C.S. Forester, The African Queen

“Clairvoyant, Hornblower could foresee that in a year’s time, the world would hardy remember the incident. In twenty years, it would be entirely forgotten. Yet those headless corpses up there in Muzillac; those shattered redcoats; those Frenchmen caught in the four-pounder’s blast of canister — they were as dead as if it had been a day in which history had been changed.”