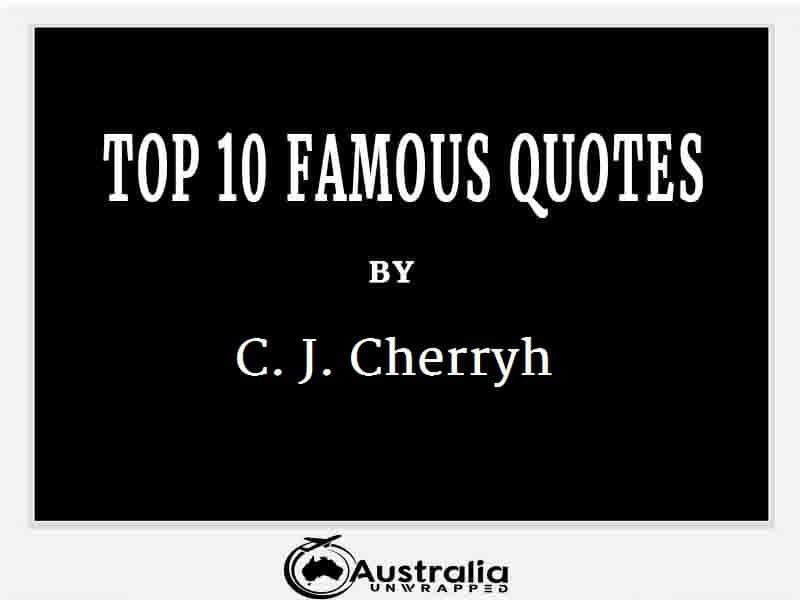 Quotes, who doesn’t love a good quote? This series of articles we look at Top 10 Famous Quotes by Author C. J. Cherryh, author quotes are always a challenge and fun to pick, with C. J. Cherryh you will find my Ten favourites of C. J. Cherryh’s quotes.

“Science fiction is a dialogue, a tennis match, in which the Idea is volleyed from one side of the net to the other. Ridiculous to say that someone ‘stole’ an idea: no, no, a thousand times no. The point is the volley, and how it’s carried, and what statement is made by the answering ‘statement.’ In other words  if Burroughs initiates a time-gate and says it works randomly, and then Norton has time gates confounded with the Perilous Seat, the Siege Perilous of the Round Table, and locates it in a bar on a rainy night  do you see both the humor and the volley in the tennis match?”
― C.J. Cherryh

“But his political sense kept up a persistent itch that said: A, Given ignorance in the mix, stupidity was at least as common in politics as astute maneuvering; B, Crisis always drew insects; and, C, Inevitably the party trying to resolve a matter had to contend with the party most willing to exploit it.”
― C.J. Cherryh, Invader

“A year of ending and beginning, a year of loss and finding…and all of you were with me through the storm. I drink your health, your wealth, your fortune for long years to come, and I hope for many more days in which we can gather like this.”
― C.J. Cherryh, Fortress of Eagles

“Honor to the earth,” the abbot said, “honor to the dead in the passing of the year; honor to the living, in the coming of the new. A Great Year passes tonight. A new one begins. Let the good that is old continue and let the rest perish….”
― C.J. Cherryh, Fortress of Owls

“I’m not a person who stands still well. But the the earth is always in motion, and I like keeping up with it. I don’t want just to exist. I want to know. I want to see. I want to understand.”
― C.J. Cherryh, The Collected Short Fiction of C.J. Cherryh

“Jane leaned back against the counter and stared at the ceiling. At the traditional location of God, no matter what the planet.”
― C.J. Cherryh, The Betrayal

“Trouble didn’t just come in threes: it gathered passengers as it went, and crashed nastily into bystanders.”
― C.J. Cherryh, Forge of Heaven

“It is perfectly okay to write garbage–as long as you edit brilliantly.”
― C. J. Cherryh

“Watch out for a man whose enemies keep disappearing.”
― C.J. Cherryh, Deceiver

“Yes, ma’am,” he said, and folded his hands and stopped where he was, listening, waiting while a very sick woman tried to gather her faculties.
“First off, tell the dowager she’s a right damn bastard.”
It was no time for a translator to argue. Mitigation, however, was a reasonable tactic. “Aiji-ma, Sabin-aiji has heard our suspicions regarding Tamun and received assurances from me and Gin-aiji that we have not arranged a coup of our own. She addresses you with an untranslatable term sometimes meaning extreme disrepute, sometimes indicating respect for an opponent.”
Ilisidi’s mouth drew down in wicked satisfaction. “Return the compliment, paidhi.”
“Captain, she says you’re a right damn bastard, too.”