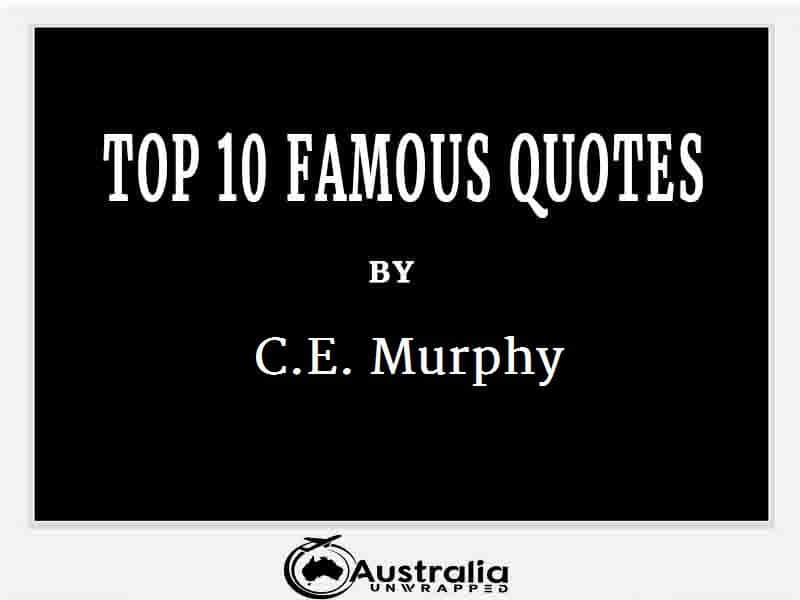 Quotes, who doesn’t love a good quote? This series of articles we look at Top 10 Famous Quotes by Author C.E. Murphy, author quotes are always a challenge and fun to pick, with C.E. Murphy you will find my Ten favourites of C.E. Murphy’s quotes.

“In Ireland, you go to someone’s house, and she asks you if you want a cup of tea. You say no, thank you, you’re really just fine. She asks if you’re sure. You say of course you’re sure, really, you don’t need a thing. Except they pronounce it ting. You don’t need a ting. Well, she says then, I was going to get myself some anyway, so it would be no trouble. Ah, you say, well, if you were going to get yourself some, I wouldn’t mind a spot of tea, at that, so long as it’s no trouble and I can give you a hand in the kitchen. Then you go through the whole thing all over again until you both end up in the kitchen drinking tea and chatting.

In America, someone asks you if you want a cup of tea, you say no, and then you don’t get any damned tea.

“To my embarrassment, I was crying again. Real girl tears for the second time, these ones born out of frustration. That didn’t happen to me very often, but I hated it when it did. It was faulty wiring in the female body, tear ducts attached directly to the frustration meter. Trying to explain to men that no, I wasn’t being manipulative, I just couldn’t stop my eyes from leaking salt water, only added to the aggravation.”
― C.E. Murphy, Demon Hunts

“Why do airline pilots always call passengers “folks”? I don’t usually take umbrage at generic terminology–I’m one of those forward-thinkers who believes that “man” encompasses the whole darned race — but at whatever 0’clock in the mornning. I thought it would be nice to be called sometihng that suggested unwashed masses a little less.”
― C.E. Murphy, Urban Shaman

“They’re constants, aren’t they?” … “Books are. That’s why we like them so much. They seem immutable. They’re not, of course. Not from the author’s first draft to the tenth printing, but they seem like it.”
― C.E. Murphy, Heart of Stone

“Music, unleashed, can uplift and create and destroy, stripping away pretenses and leaving raw, exposed vulnerability behind.”
― C E Murphy

“Thank God genuine video phones hadn’t been invented. I hadn’t even grabbed a towel. Ford Prefect would despair of me.”
― C.E. Murphy

“I’m not a goddamned faith healer! I don’t talk to God! I’m a mechanic and her goddamned engine was broken!
–Joanne ”
― C.E. Murphy, Urban Shaman

“One forgets the fear of heights when one cannot fall”
― C.E. Murphy

“You went back in time,” he repeated, “and you expect his cell phone to work?”
“Well, no, I just, I mean, I came back and he hasn’t! Shouldn’t he have?”
Morrison, very steadily, said, “Were you together?”
“No! I just said he went to fight the Morrigan!”
“I see.” There was a pause. “The man is seventy-four years old, Joanie. He can take care of himself. If you were,” a great and patient pause filled the line before he went on, “time traveling. If you were time traveling and got separated, then I can’t think of any reason he would necessarily come back to the present at the same time you did.”
“Except I was the focal point, it was my fault, it –!”
“Joanne. Siobhan. Siobhan Grainne MacNamarra Walkingstick.”
I didn’t think anybody had ever said my name like that before. I gulped down a hysterical sob and whispered, “Yeah?”
Morrison, with gentle emphasis, said, “I love you. Now pull yourself together and go find the bad guy,” and hung up.”

Julian May: Author Bio About and Best Quotes