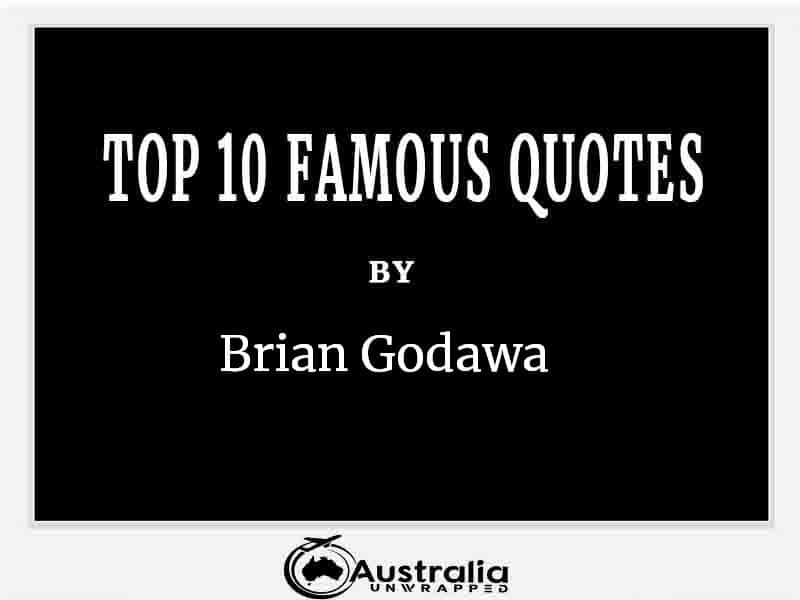 Brian Godawa, a writer whom I am guessing you love? Here are our 10 best Brian Godawa quotes for you to enjoy. At Australia Unwrapped we believe every book has at least one quotable line, and our mission is to find them all. Here you will find Brian Godawa’s top 10 popular and famous quotes. Like every good writer Brian Godawa made a number of memorable quotes, here are some of our favourites:

“Every story is informed by a worldview.”
― Brian Godawa, Hollywood Worldviews: Watching Films with Wisdom and Discernment

“[It] could be argued that the favorite sin of Satan would not be vanity, as described in ‘Devil’s Advocate’, or even unbelief in the existence of the devil, as described in ‘The Usual Suspects,’ but the imagining of a generic, Christless God. The very essence of the Christian faith centers on the identity of Jesus Christ as God’s only begotten Son, who alone is the source of salvation and author of faith (Acts 4:12). So it stands to reason that Satan’s favorite sin is the belief in a God without Jesus, because that is a god without atonement or redemption and that is what populates hell in the name of heaven.”
― Brian Godawa, Hollywood Worldviews: Watching Films with Wisdom and Discernment

“Noah realized a truth about human society: not everyone wanted freedom. When a people willingly or unwillingly become wards of their rulers, they eventually lose their capacity for self-determination. Like helpless children, they actually prefer security in exchange for their freedom. Better the misery they know while being taken care of than the misery they do not know being freely accountable for their own actions. Noah pitied them. They had lost their souls.”
― Brian Godawa, Noah Primeval

“The goal of this education is to aid the reader in striking a balance between two extremes: cultural anorexia (rejecting all moviegoing because of any negative aspects) and cultural gluttony (consuming too many movies without discretion).”
― Brian Godawa, Hollywood Worldviews: Watching Films With Wisdom & Discernment

“Elohim was with him. He was with all of them, but not in a way that some might expect. Elohim obliged no man life or blessing. He dispensed his purposes as he wished and he did not owe an explanation for his ways. He was the potter and humanity was the clay, as their creation story explained. If Elohim chose to craft some of those vessels for destruction and others for glory, that was his prerogative. He was accomplishing his purposes for his people.”
― Brian Godawa, Noah Primeval

“The Jews love their mythic connections. The Son of God, a Son of David, the original Messiah king of Israel.” Eleazer knew all too well about the promised Son of David. “Behold, the days are coming, declares Yahweh, when I will raise up for David a righteous Branch, and he shall reign as king and deal wisely, and shall execute justice and righteousness in the land. “A son of Zeus!” said an amused Artabanus. “You jest,” said Antipas, “But you are more in on the joke than you realize.” Antipas wanted to ingratiate himself with the foreign ruler. He kept the amusement going like a master of chorus in a Greek play. “Rumors have been spreading that this Nazarene was born of a virgin!”
― Brian Godawa, Jesus Triumphant

“Of course they do, Shem. Clever disguise for clever abominations.” Noah’s eyes went wide. Those words were familiar; the name, the voice. He tried to get a better glimpse of his captor. “Shem? Shem ben Noah?” It confused the young warrior with the dagger. The archer’s surprise gave way to recognition. Noah looked up at the young man with arrow aimed at his heart. “Japheth?” he pleaded. Japheth, ever the impulsive one, responded first. “Father! I did not recognize you!” Shem lowered his dagger, and turned Noah around. They looked into each other’s eyes. No further doubt remained that they were father and son. “It has been so long.” Shem wrapped Noah in a big bear hug. Japheth dropped his bow, ran and jumped onto the two of them, and they tumbled to the ground in a family wrestling match.”
― Brian Godawa, Noah Primeval

“how it had looked like Eden. He pondered what it was like for the Man and Woman to be in such communion with Elohim, their fellow creatures, and the world around them, full of splendor and glory. He wondered what it would be like to be in Elohim’s presence and the presence of his divine council of ten thousands of holy ones surrounding his throne and worshipping in the Garden that was his temple.”
― Brian Godawa, Noah Primeval

“the other gods had discovered the universal economic law from time immemorial: whatever you tax you get less of, and whatever you subsidize you get more of. By heavily overtaxing wealth, she could decrease the amount of private wealth and therefore lessen its power. By subsidizing poverty with government welfare she would increase poverty and thus dependency upon the state. Human nature was such an easy thing to exploit when you understood how it operated.”
― Brian Godawa, Enoch Primordial

“Spiral pathways wound their way downward like a whirlpool in pursuit of copper, the life food of a new age begun by the discovery of bronze. Bronze was an alloy more durable than its copper predecessor, being used in everything from tools and decoration to weapons and armor. It was discovered by mixing tin with copper, which resulted in the harder bronze that would last longer and kill more efficiently in weaponry. For all those reasons, especially the last, gods and kings needed plenty of bronze to build their kingdoms. Extracting copper ore from the ground was laborious work. It required many men to unearth the volume demanded by such rulers. The necessary work force could be met by only one thing: Slaves, and lots of them.”
― Brian Godawa, Noah Primeval

Quotes for all, here you found our selection of 10 Brian Godawa quotes. Make sure you help by commenting your best Brian Godawa quote below and sharing our favourite authors so we can look them up, read some of their works and give you the best quotes we can find. We hope you enjoyed our top 10 quotes by Brian Godawa. However, feel free to comment below if you disagree or would like to include some other great and memorable Brian Godawa quotes in our list.

“Their first goal was to eradicate Elohim from the minds of men and replace him with their own pantheon. They disseminated myths that supported their hierarchy of the four high gods reigning over the earth. The four were: Anu, father god of the heavens; his vice-regent Enlil, lord of the air, wind, and storm; Enki, god of water and Abyss; and Ninhursag, the earth goddess. Below them were the three that completed the “Seven who Decreed Fate”: Nanna the moon god; Utu the sun god; and Inanna, goddess of sex and war. The Sumerians called these and the other gods of the cities Anunnaki, which means “gods of royal seed.”
― Brian Godawa, Noah Primeval