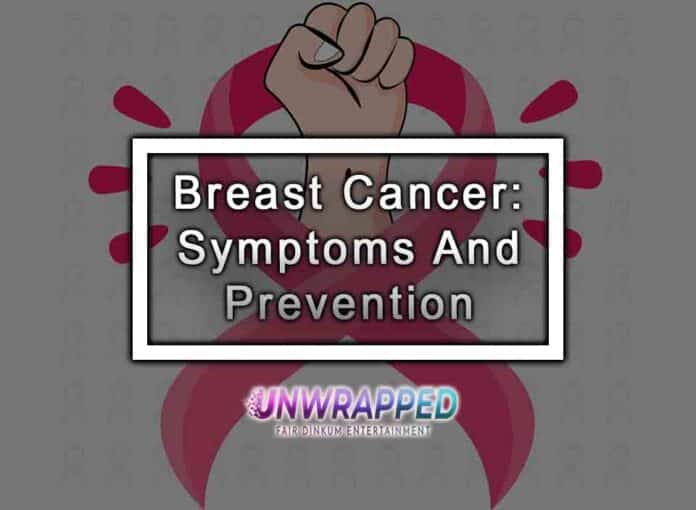 Breast Cancer: Symptoms And Prevention – The tumor has an effect on the breast tissue, which leads to a deformity in the tissues that are in close proximity to it. As a consequence of this, the affected breast will either become bigger (as a result of swelling) or smaller (as a result of tissue retraction), in addition to exhibiting a different morphology.

Because of the existence of local fibrosis, there is a possibility that the area of the breast that is immediately above the tumor may become depressed in certain cases (a kind of degeneration of the fibers of the mammary glands).

Redness, Warmth, Or Pain In The Skin Of The Breast

Formation Of Sores Or Crusts On The Nipple Skin

Ulcers or scabs on the nipple are breast cancer symptoms that have advanced to a more superficial stage. These sores may be traced back to the ulcer in the area.

The nipple flips over as a result of the growth of a tumor in the retro areolar zone, which is also referred to as the area behind the areola. This tumor, which is similar to those that may affect any other region of the skin on the breast, has the ability to pull the skin of the areola and cause the nipple to invert. This may also happen if cancer spreads to another part of the breast. It is pretty similar to the skin dip that was explained before; however, it is carried out in a very specific location.

Keep an eye out for any warning symptoms, get checked out by a trained medical practitioner, and get help as soon as you possibly can. Do not give in to the temptation of letting cancer, which may at first be treatable and curable, take command of your life.

Also see: When To Go To The Dentist?

Stay Connected
41,936FansLike
5,684FollowersFollow
816FollowersFollow
Previous article
When To Go To The Dentist?
Next article
General Care For The Elderly

Sport And Menstruation: How To Train According To The Phases Of...

What Does Each Type Of Food Give Us