Boring Cough? Which Tea Is Best Suited For Each Type Of Cough? 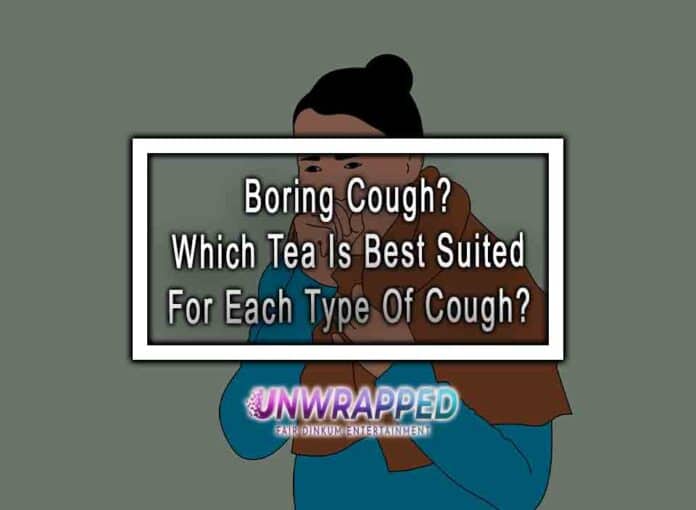 You’re probably familiar with that bothersome cough that just won’t go away, right? Do you find it to be annoying? However, you should realize that there are many distinct kinds of cough. In a moment, we will go through each of these concepts in further detail. But the question that won’t go away is, “What can I do to make this cough less severe?” Tea, the kind that our moms and grandparents used to make for us, is an excellent choice for those looking for an alternate beverage. They differ from person to person based on the cause and severity of the cough, with the appropriate meals being used to address each individual’s unique issue. Get the cup ready, and I’ll show you. What exactly is the point of drinking a cup of tea?

First, a word of caution: when dealing with serious instances or coughs that won’t go away, it is strongly advised that you see a medical professional.

What Are The Types Of Cough?

There are two distinct forms of cough, despite the fact that they both seem the same: a dry cough and a productive cough. The presence or absence of secretion in the airways, more often known as “phlegm,” is the primary distinction between the two conditions.

There is also a third form of cough known as an allergic cough. The way in which an allergic cough manifests itself differs depending on the cause of the cough, which in this instance would be an allergy to anything that was breathed in, like dust, for instance. Dry cough is the most common presentation of an allergic cough.

Which Tea Is Best Suited For Each Type Of Cough?

In terms of the tea that is most suited to combat dry cough, which is a more uncomfortable kind of cough, ginger tea with lemon is the best option. Ginger tea with honey is an excellent option for treating coughs brought on by allergic reactions. Tea made from eucalyptus is a wonderful choice for those who suffer from a productive cough that is both dry and hacking in nature.

What Do These Teas Have To Fight Coughing?

In the case of eucalyptus tea, it contains a component known as eucalyptol, which is an exceptionally potent agent for clearing the airways, assisting in the expulsion of phlegm, and facilitating the discharge of pollutants.

Ginger, on the other hand, is an effective treatment for dry and allergy coughs. Ginger has anti-inflammatory characteristics, which assist to decrease irritation in the throat and lungs, which is often what produces that uncomfortable “scratch” at the back of the throat. Ginger is a fighting agent.

The Benefits Of Honey For Cough Cure

Honey is nearly universally agreed upon as being the most effective component for suppressing coughs, despite the fact that some people are under the impression that ginger is the most effective ingredient for doing so and others feel that lemon is.

Honey contains a number of minerals, including calcium and iron, which are able to protect and fortify the body in many ways. A number of studies has also found that it is more successful than a significant number of antibiotics in the treatment of coughs, the flu, or colds.

Are There Any Contraindications For Cough Teas?

Last but not least, infants and toddlers who have not yet reached their first birthday should not consume honey.

After reading these recommendations, you should already be aware that you may be able to alleviate your coughing issue by using something already in your kitchen at home.

Stay Connected
52,673FansLike
5,667FollowersFollow
829FollowersFollow
Previous articleVitamins For Weight Loss: Are There Any Vitamins That Lose Weight?
Next articleHealthy Kidney: What Is The Function Of The Kidney And How To Keep It Healthy