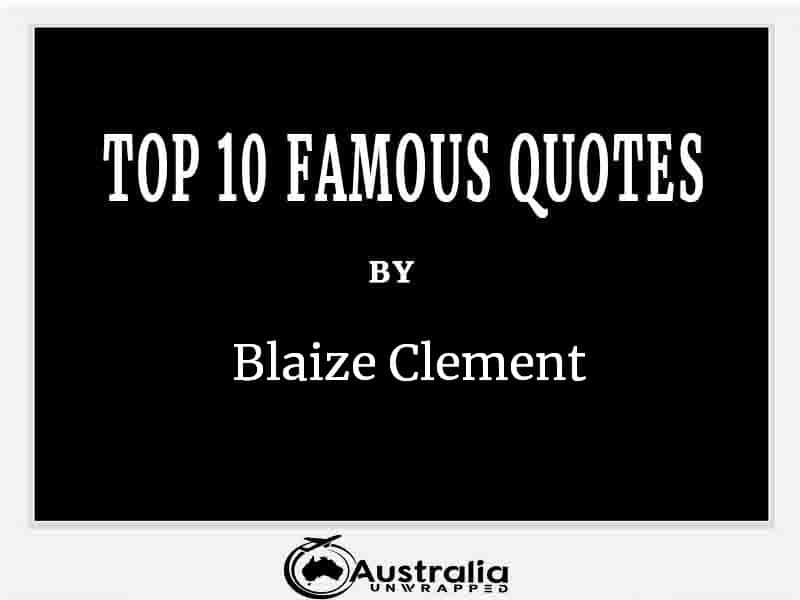 Blaize Clement, a writer whom I am guessing you love? Here are our 10 best Blaize Clement quotes for you to enjoy. At Australia Unwrapped we believe every book has at least one quotable line, and our mission is to find them all. Here you will find Blaize Clement’s top 10 popular and famous quotes. Like every good writer Blaize Clement made a number of memorable quotes, here are some of our favourites:

“They say God never gives us more than we can handle, but sometimes I think God has overestimated what I can take.”
― Blaize Clement, Curiosity Killed the Cat Sitter

“Protecting people from the truth is another way of shutting them out.”
― Blaize Clement

“Perfume companies ought to bottle the smell of crisp bacon. Forget pheromones. I’ll bet a woman with a little spot of bacon grease behind her ears would attract every male within a five-mile radius.”
― Blaize Clement, Curiosity Killed the Cat Sitter

“Being young is easy, you know, but it takes guts to be old.”
― Blaize Clement, Curiosity Killed the Cat Sitter

“She remembered the day that she first realized she would never be able to read every book in the world,” said John Clement. “She cried for days.”
― Blaize Clement

“Heads of warring nations could learn a lot about how to achieve lasting peace by watching dogs and cats who live in the same house.”
― Blaize Clement, Raining Cat Sitters and Dogs

“My pet-sitting day ends around sunset, and it’s very satisfying to know that I’ve made several living beings happy that day. That I left their food bowls sparkling clean and fresh water in their water bowls. That I brushed them so their coats shined, and played with them until all our hearts were beating faster. That I kissed them goodbye and left them with their tails wagging or flipping or at least raised in a happy kind of way. That’s a heck of a lot more than any president, pope, prime minister, or potentate can say, and I wouldn’t switch places with any of them.”
― Blaize Clement, Cat Sitter on a Hot Tin Roof

“August in Florida is God’s way of reminding us who’s in charge.”
― Blaize Clement, Raining Cat Sitters and Dogs

Quotes for all, here you found our selection of 10 Blaize Clement quotes. Make sure you help by commenting your best Blaize Clement quote below and sharing our favourite authors so we can look them up, read some of their works and give you the best quotes we can find. We hope you enjoyed our top 10 quotes by Blaize Clement. However, feel free to comment below if you disagree or would like to include some other great and memorable Blaize Clement quotes in our list.

“I pulled the dress out of the bag and held it in front of me. Ella sat up straighter and squinted her eyes, while Michael and Paco made the noises men make when a woman says, “What do you think?” Fathers probably teach those noises to their sons when they’re young—“Stand up when you’re introduced to a lady, use your napkin instead of your sleeve, and make admiring noises when a woman shows you anything, no matter what it is, and asks you what you think about it. Never, never, never say you have no opinion.”