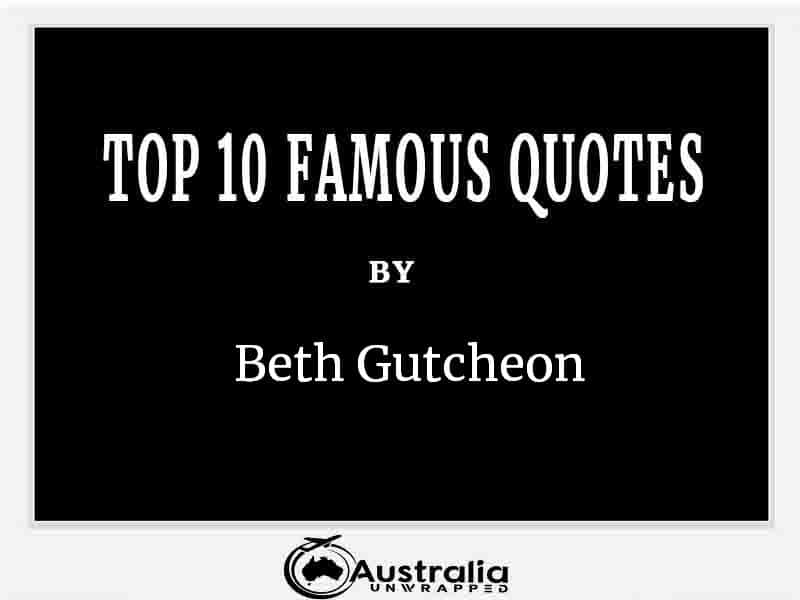 Quotes, who doesn’t love a good quote? This series of articles  we look at Top 10 Famous Quotes by Author Beth Gutcheon , author quotes are always a challenge and fun to pick, with Beth Gutcheon  you will find my Ten favourites of Beth Gutcheon ’s quotes.

“I don’t suppose you have to believe in ghosts to know that we are all haunted, all of us, by things we can see and feel and guess at, and many more things that we can’t.”
― Beth Gutcheon, More Than You Know

“I wanted this day, the perfect buttery sun like peach ice cream, the speed, the satin leather of the car seat, the fair. Forbidden fruit, a day like no other. ”
― Beth Gutcheon, More Than You Know

“You’re never too old to keep failing your children, are you? Why weren’t we told this was a life sentence?”
― Beth Gutcheon, Good-bye and Amen

“Did you know that the origin of the word gossip in English is “god-sibling”? It’s the talk between people who are godparents to the same child, people who have a legitimate loving interest in the person they talk about. It’s talk that weaves a net of support and connection beneath the people you want to protect.”

“Damned no matter what you do. Why do people think knowing secrets is fun?”
― Beth Gutcheon, Gossip

“Raymond, through some curious alchemy of his own, had come really to think a divorce was something you could win, as opposed to a situation in which the wounded attempt to contain loss. She once said to her friend Annie, “It’s like fighting over who gets the litterbox after the cat is dead. Raymond has forgotten we ever had a cat; he actually wants the litterbox. Full.” She said Annie had laughed and then Martha cried”
― Beth Gutcheon

“Sacrifice is a necessary response to evil. You can only shame evil by showing them honor.”
― Beth Gutcheon, Leeway Cottage

“Next door was a vegetarian café and deli, and next to that was the Wooly Bear yarn shop. Its logo was a caterpillar in shades of yellow, green, and scarlet. Maggie went in.

The shop was warm and bright, with one entire wall given over to cubbyholes filled with yarns of every hue in many weights and fibers. The opposite wall held small skeins and spools of thread on pegs for embroidery and quilting. There were racks of pattern books and magazines, and in the back a mini classroom was set up with a small maple table and folding chairs, now accommodating a group of eight-year-olds wielding fat knitting needles and balls of oversize wool. A girl of about sixteen wearing a Rye Manor sweatshirt was helping a little boy to cast on stitches.”
― Beth Gutcheon, The Affliction

“In marriage if one partner stays small and quiet in one area of the universe of two, the other may (or must) expand to fill the void.”