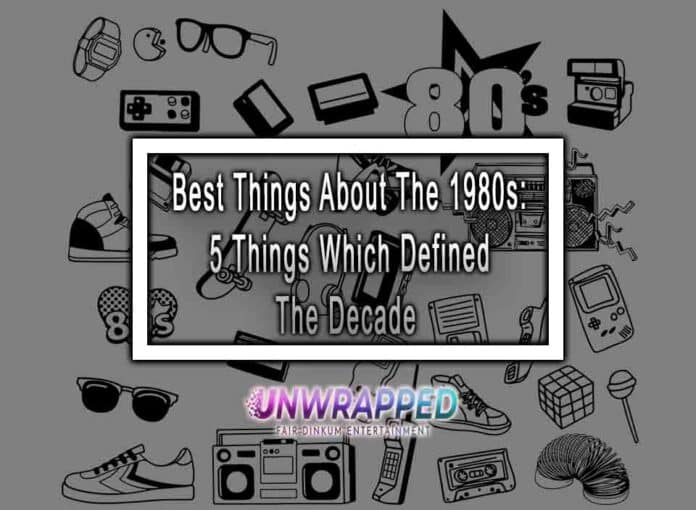 Today we look back on the 1980s as a truly golden time. Whether it’s fashion, music, movies, or TV, this era is overflowing with cultural relevance. The fact that so many things are remembered about this period, is really a sign of that times cultural strength. If you’re wondering what we’re talking about, here are some of the best things about 1980s.

Today, video games are by far the biggest entertainment game industry. In fact, this sector is projected to bring in about $413 billion by 2028, and profits are projected to soar way past that. It’s funny to think that it wasn’t always this way. At the start of the 1980s, video games were all but dead. This all changed when Nintendo came on the scene. The release of the Nintendo Entertainment System proved groundbreaking and revitalized video games forever. What also helped was a run of classic titles like Super Mario Bros, Duck hunt, Tetris, and Pac-Man.

Easily one of the best things about 1980s was the development of hip hop. Previously, this music genre was confined to places like New York, but over the decade it began to spread throughout the world. It all began with people like DJ Kool Herc and Grandmaster Flash. These artists were instrumental in laying the foundations of early hip hop. Other 80s artists also included LL Cool J, Run DMC, Nas, and A Tribe Called Quest.

Some of the best things about 1980s (or worst depending on your point of view) were definitely the clothes. 80s clothing might actually be defining reason why we remember this period so well. The reason why is simply because the clothing of this period is truly iconic – and not in a good way. The point is that 80s clothing is loud, sticks out, and gets attention. After all, who could forget things like shoulder pads, crimped hair, and neon clothing.

Like most decades, the 80s also saw their share of groundbreaking and horrifying events. Some of the biggest include things like the explosion of the Chernobyl nuclear reactor, the fall of the Berlin Wall, and the space shuttle Challenger Disaster. This decade also saw its share of cultural milestones. Some of these include the Band Aid single “Do they know it’s Christmas, as well as the introduction of new coke, and the debut of the Simpsons.

The 80s were also a very strange era when it comes to toys. The best example of this were Cabbage Patch Kids. These ugly looking dolls were released in 1982, and quickly generated a frenzy amongst the public. This culminated in riots at several stores, where customer hit, shoved, and trampled each in an attempt to get their hands on these dolls. Truly bizarre. Another toy which was drove the public crazy was the Beanie Baby. What’s most interesting about these toys is that they soon turned into valuable collectibles. This trend actually reached its height  during the 90s, when people started selling these toys for thousands on places like Ebay. Today, some of these toys can sell for as much as $5,000.

Read More: What Items Were Popular In The 80s