The 3 Best Teas To Fall Asleep 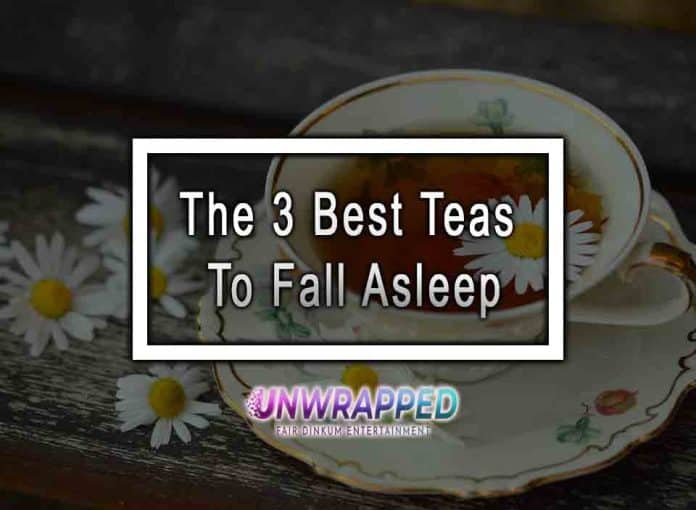 A growing number of individuals are experiencing difficulty falling asleep. Teas to assist you to fall asleep might be useful in this situation. You may learn more about them here.

More individuals than you believe have experienced coming into bed “dead weary” and yet being unable to sleep. Sleep difficulties, particularly difficulty falling asleep, are common. In the long term, this is unhealthy and may cause a variety of adverse consequences. But, in order to ultimately be able to sleep well, what should you do? Sleep teas are a natural method to unwind after a long day, among other things.

Chamomile tea is often associated with colds and gastrointestinal problems. However, the mild-tasting herb has additional capabilities and is not utilized in medicine for no purpose. Chamomile tea is also known for helping people fall asleep.

In several investigations, at least a few scientists have been able to demonstrate the soothing effect of chamomile. Apigenin, a flavonoid from the family of secondary plant compounds, is the cause of this. The researchers discovered a link between consuming chamomile tea and a lower level of a key stress hormone. In another trial, those who drank chamomile tea fell asleep almost instantly and stayed asleep for 90 minutes.

Several studies have shown no impact of chamomile tea on sleep quality despite these encouraging findings. There is a need for further investigation as a result of this.

A cup of chamomile tea, on the other hand, can’t go wrong before bed. Simply test it to determine whether chamomile is a good sleeping tea for you.

Hops aren’t only good in beer; they’re also thought to have a relaxing impact on our bodies when consumed as a tea. As a result, several studies have looked at the effects of hops (in conjunction with valerian) on sleep disturbances. Various characteristics, such as sleep quality and time to fall asleep, were studied in more depth and shown to be greatly enhanced by hop consumption. Nonetheless, further study is required in this area.

In another study, researchers looked into the soothing effects of hops and discovered something incredible: All test participants saw a reduction in the symptoms of moderate depression and stress after consuming hops extract (daily) for four weeks.

As a result of its relaxing properties, hops may be used as a bedtime tea. Fresh hop cones may be dried and soaked in hot water. The tea may also be purchased ready-to-eat as an alternative.

Lemon balm has a cooling effect, which is very useful in the heat. Green leaves, on the other hand, may accomplish much more and should therefore be beneficial while going asleep. Lemon balm, like hops, has a soothing effect and is thought to help with insomnia. That’s what researchers discovered in a study. An extract from lemon balm was also shown to lower stress, resulting in improved sleep.

Despite the fact that this research was done on mice, menthol-like herbs have been used to promote sleep since mediaeval times.

The tea may be made with fresh lemon balm or dried lemon balm from the health food shop. This tea for going asleep also has a refreshing and delectable flavor.

Also see: Gut: 5 Facts About It