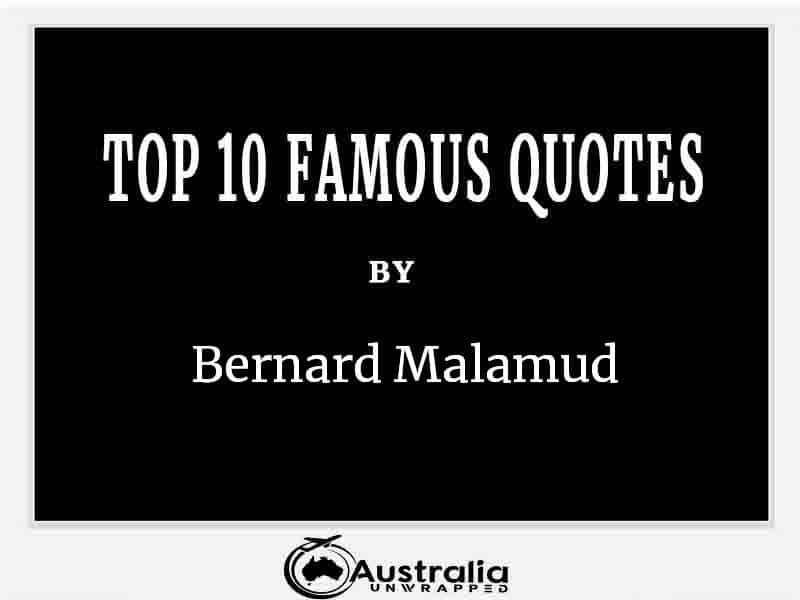 Quotes, who doesn’t love a good quote? This series of articles  we look at Top 10 Famous Quotes by Author Bernard Malamud, author quotes are always a challenge and fun to pick, with Bernard Malamud you will find my Ten favourites of Bernard Malamud’s quotes.

“There comes a time in a man’s life when to get where he has to go–if there are no doors or windows–he walks through a wall.”
― Bernard Malamud

“Where to look if you’ve lost your mind?”
― Bernard Malamud, The Fixer

“We have two lives… the life we learn with and the life we live after that. Suffering is what brings us towards happiness.”
― Bernard Malamud, The Natural

“Without heroes we’re all plain people and don’t know how far we can go.”

“The purpose of a writer is to keep civilisation from destroying itself.”

“What suffering has taught me is the uselessness of suffering.”
― Bernard Malamud

“Teach yourself to work in uncertainty.”
― Bernard Malamud

“There are no wrong books. What’s wrong is the fear of them.”
― Bernard Malamud, The Fixer

“Of course it would cost something, but he was an expert in cutting corners; and when there were no more corners left he would make circles rounder.”
― Bernard Malamud, The Magic Barrel

“The wild begins where you least expect it, one step off your normal course”

“range viewer mounted near our ship’s console. Jafar steered for Lucas. After a few more “Her face deeply moved him. Why, he could at first not say. It gave him the impression of youth–spring flowers, yet age–a sense of having been used to the bone, wasted; this came from the eyes, which were hauntingly familiar, yet absolutely strange. He had a vivid impression that he had met her before, but try as he might he could not place her although he could almost recall her name, as he had read it in her own handwriting. No, this couldn’t be; he would have remembered her. It was not, he affirmed, that she had an extraordinary beauty–no, though her face was attractive enough; it was that something about her moved him. Feature for feature, even some of the ladies of the photographs could do better; but she lapsed forth to this heart–had lived, or wanted to–more than just wanted, perhaps regretted how she had lived–had somehow deeply suffered: it could be seen in the depths of those reluctant eyes, and from the way the light enclosed and shone from her, and within her, opening realms of possibility: this was her own. Her he desired. His head ached and eyes narrowed with the intensity of his gazing, then as if an obscure fog had blown up in the mind, he experienced fear of her and was aware that he had received an impression, somehow, of evil. He shuddered, saying softly, it is thus with us all. Leo brewed some tea in a small pot and sat sipping it without sugar, to calm himself. But before he had finished drinking, again with excitement he examined the face and found it good: good for Leo Finkle. Only such a one could understand him and help him seek whatever he was seeking. She might, perhaps, love him. How she had happened to be among the discards in Salzman’s barrel he could never guess, but he knew he must urgently go find her.”