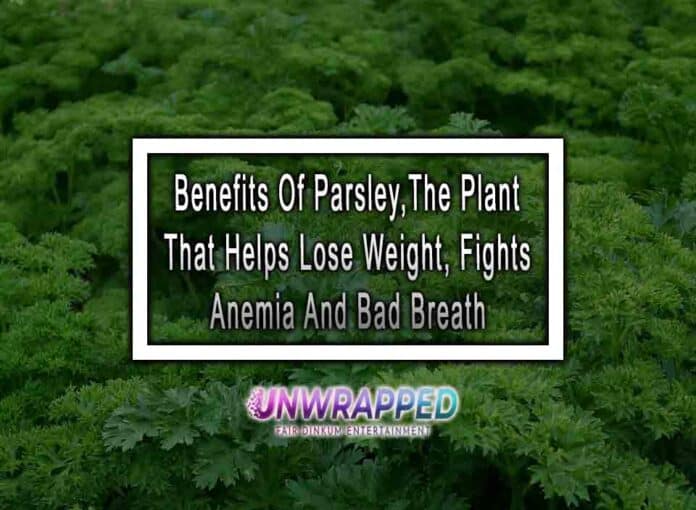 Parsley plant provides significant health advantages when used frequently, in addition to being one of the most loved fragrant plants in the kitchen.

Following years of troubling increases in processed food consumption, an increasing number of individuals are diving into the area of healthy eating in quest of the healthiest foods available. Mint, artichoke, and parsley are some of the most popular nutritional cocktails.

Parsley, one of the most popular fragrant herbs in the world, is also a vitamin powerhouse that provides a slew of health advantages when ingested on a daily basis.

Experts say it’s about much more than our food’s aesthetic and fragrant touch.

Parsley, which has a high nutritional content, is native to the eastern Mediterranean, where it is said to have originated on the island of Sardinia, from where it spread around the globe. The Greeks and Romans utilized it in antiquity, and it is said that gladiators ingested it before their fights. It is also said that Charlemagne grew it in his gardens, conquered by its characteristics.

Parsley is one of the best natural sources of vitamin C, iron, calcium, and vitamin A, and is prized for its diuretic, digestive, and purifying effects, among others.

It boasts up to three times more vitamin C than some of the most popular citrus fruits, more vitamin A than carrots and sweet potatoes, more iron than spinach, is a good source of folic acid and calcium, and just 45 calories per 100 grams.

Parsley is credited with several health advantages due to its nutritional value:

Acts as a diuretic:

One of the most well-known advantages of parsley is that it aids in the elimination of toxins and the buildup of liquids in our bodies. They claim that it is beneficial as a natural cure for cleansing the kidneys and preventing cellulite in this manner.

Both parsley-based foods and a parsley infusion taken before a meal aid digestion and reduce gas and intestinal spasms.

Parsley leaves are an effective cure for halitosis due to their essential oils and chlorophyll levels.

Its diuretic activity aids in the elimination of toxins from the bladder, which aids in the treatment of diseases like cystitis. It also inhibits the development of other urinary tract infections.

As previously said, this fragrant plant’s iron levels are highly regarded. As a result, it is a natural way to fight anemia.

Various studies show that parsley ingestion in suitable dosages improves antioxidant levels dramatically. These reduce oxidative stress, which is linked to cell ageing and the risk of certain illnesses.

Also see: 5 Foods That You Should Include In Your Healthy Breakfast To Start The Day With Energy

Can A Pregnant Woman Take Paracetamol And Is Good?

The 7 Different Types of Yoga That Exist