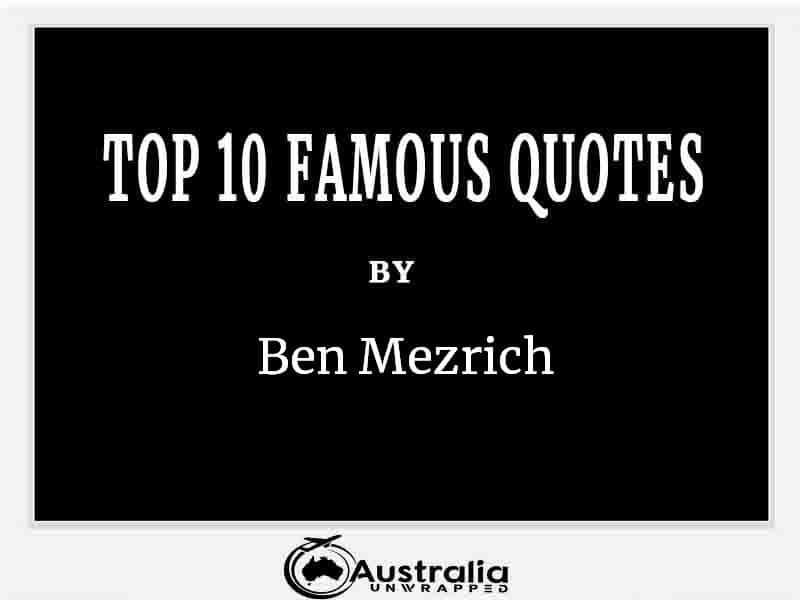 Quotes, who doesn’t love a good quote? This series of articles  we look at Top 10 Famous Quotes by Author Ben Mezrich, author quotes are always a challenge and fun to pick, with Ben Mezrich you will find my Ten favourites of Ben Mezrich’s quotes.

“Everyone had a story he believed was worthy of a best-seller; for me, reality was rarely interesting enough to take the place of fiction.”
― Ben Mezrich, Bringing Down the House: The Inside Story of Six M.I.T. Students Who Took Vegas for Millions

“in other words, his story was part boast, part confession.”
― Ben Mezrich, Bringing Down the House: The Inside Story of Six M.I.T. Students Who Took Vegas for Millions

“To guys like Mark, time was another weapon of the establishment, like alphabetical order. The great engineers, hackers – they didn’t function under the same time constraints as everyone else.”
― Ben Mezrich, The Accidental Billionaires: The Founding of Facebook, a Tale of Sex, Money, Genius, and Betrayal

“Below, he could see down the entire Strip, from the radioactive green lion at the base of the MGM Grand to the glowing spire of the Stratosphere. The logjam street traffic just added to the visual effect: a thousand headlights blinking like neurons in the glowing spine that snaked down the center of the city.”

― Ben Mezrich, Bringing Down the House: The Inside Story of Six M.I.T. Students Who Took Vegas for Millions

“I once knew a beautiful young woman that didn’t believe in forever. She became my forever.”
― Ben Mezrich, Sex on the Moon: The Amazing Story Behind the Most Audacious Heist in History

“occurred. But there was no denying it now, the evidence was all over him. The pleasantly warm flush to his normally sallow cheeks; the relaxed, almost rubbery way he leaned against the window—a stark contrast to his usual calcified, if slightly hunched posture; and most important”
― Ben Mezrich,  The Accidental Billionaires: The Founding of Facebook

“someone exceedingly loyal, a true yes-man, a cog who knew when to turn, when to stay still.”
― Ben Mezrich,Once Upon a Time in Russia: The Rise of the Oligarchs—A True Story of Ambition, Wealth, Betrayal, and Murder

“Tyler was to his left, and to his right were the three other witnesses who had joined them for the headlining session of the first day of testimony. Directly next to Cameron sat Fred Wilson, a seasoned venture capitalist veteran who had moved into the cyber currency space in a big way, with the countenance of someone who had seen a number of technology waves, including the first dot-com boom and bust. Next to Wilson, the up-and-comer venture capitalist Jeremy Liew, a partner at Lightspeed Venture. And at the end of the bench, Barry Silbert, the founder and CEO of the startup SecondMarket.”
― Ben Mezrich, Bitcoin Billionaires

“As an entrepreneur, you had one, maybe two, but usually not more than three chances to catch lightning in a bottle; as a venture capitalist, however, you could chase lightning as long as you had cash to invest.”
― Ben Mezrich,  Bitcoin Billionaires

“You still had to use the Balkanized, legacy banking system, which was built before the internet even existed, littered with middlemen and rent-seekers all along the way. And only if the central authorities of this network allowed it to happen, would your money move at a snail’s pace from point A to point B.”

“Which left only rhodium, palladium, platinum, silver, and gold—five of the eight noble metals. Rhodium and palladium wouldn’t be discovered until the 1880s, well after money had been in use for thousands of years; and platinum’s melting point would have been too high for preindustrial furnaces. By process of elimination you were left with silver and gold. Silver tarnished easily and had a much greater industrial application—too useful to make good money—leaving gold just useful enough. “Gold is valuable because of its naturally occurring properties: it’s scarce, durable, portable, divisible, fungible, hard to counterfeit, and easy to authenticate,” Tyler said. “Exactly,” Voorhees responded, “and bitcoin has all of those properties too—”