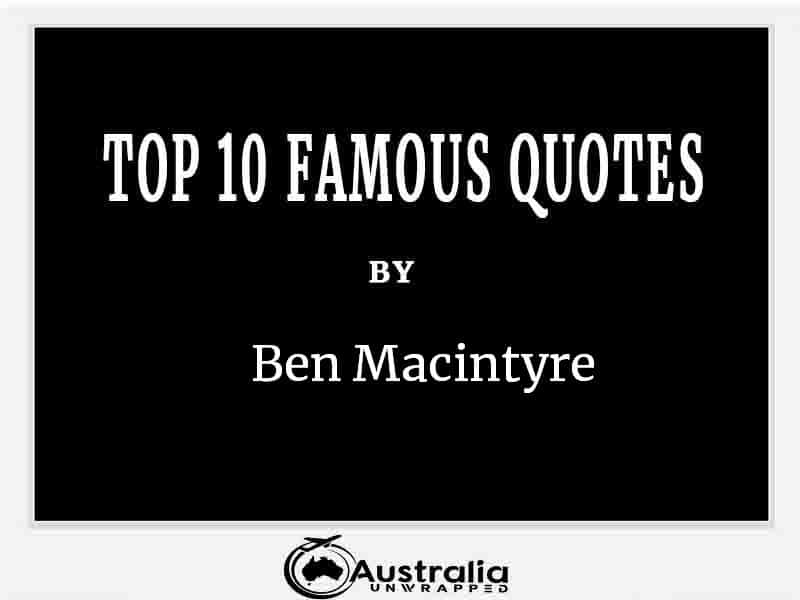 Quotes, who doesn’t love a good quote? This series of articles  we look at Top 10 Famous Quotes by Author Ben Macintyre, author quotes are always a challenge and fun to pick, with Ben Macintyre you will find my Ten favourites of Ben Macintyre’s quotes.

“The policemen agreed they were living with a most peculiar fellow. One moment he was reading classical literature in the original French and quoting Tennyson, and the next he would be discussing the best way to blow up a train.”
― Ben Macintyre, Agent Zigzag: A True Story of Nazi Espionage, Love, and Betrayal

“What is the use of living if you cannot eat cheese and pickles?”
― Ben Macintyre, Operation Mincemeat: How a Dead Man and a Bizarre Plan Fooled the Nazis and Assured an Allied Victory

“Eccentricity is one of those English traits that look like frailty but mask a concealed strength; individuality disguised as oddity.”
― Ben Macintyre, A Spy Among Friends: Kim Philby and the Great Betrayal

“War is too messy to produce easy heroes and villains; there are always brave people on the wrong side, and evil men among the victors, and a mass of perfectly ordinary people struggling to survive and understand in between. Away from the battlefields, war forces individuals to make impossible choices in circumstances they did not create, and could never have expected. Most accommodate, some collaborate, and a very few find an internal compass they never knew they had, pointing to the right path.”

“The fatal conceit of most spies is to believe they are loved, in a relationship between equals, and not merely manipulated.”
― Ben Macintyre, A Spy Among Friends: Kim Philby and the Great Betrayal

“Deception is a sort of seduction. In love and war, adultery and espionage, deceit can only succeed if the deceived party is willing, in some way, to be deceived.”
― Ben Macintyre, Operation Mincemeat: How a Dead Man and a Bizarre Plan Fooled the Nazis and Assured an Allied Victory

“Here, then, was a truly bizarre situation: Philby was telling Moscow the truth, but was disbelieved, and allowed to go on thinking he was believed; he was deceiving the British in order to aid the Soviets, who suspected a deception, and were in turn deceiving him.”
― Ben Macintyre,  A Spy Among Friends: Kim Philby and the Great Betrayal

“The trickiest aspect of lying is maintaining the lie. Telling an untruth is easy, but continuing and reinforcing a lie is far harder. The natural human tendency is to deploy another lie to bolster the initial mendacity. Deceptions—in the war room, boardroom, and bedroom—usually unravel because the deceiver lets down his guard and makes the simple mistake of telling, or revealing, the truth.”
― Ben Macintyre, Operation Mincemeat: How a Dead Man and a Bizarre Plan Fooled the Nazis and Assured an Allied Victory

“The true man wants two things: danger and play. For that reason he wants woman, as the most dangerous plaything.”

“Philby now went in for the kill. Elliott had tipped him off that he would be cleared by Macmillan, but mere exoneration was not enough: he needed Lipton to retract his allegations, publicly, humiliatingly, and quickly. After a telephone consultation with Elliott, he instructed his mother to inform all callers that he would be holding a press conference in Dora’s Drayton Gardens flat the next morning. When Philby opened the door a few minutes before 11:00 a.m. on November 8, he was greeted with gratifying proof of his new celebrity. The stairwell was packed with journalists from the world’s press. “Jesus Christ!” he said. “Do come in.” Philby had prepared carefully. Freshly shaved and neatly barbered, he wore a well-cut pinstriped suit, a sober and authoritative tie, and his most charming smile. The journalists trooped into his mother’s sitting room, where they packed themselves around the walls. Camera flashes popped. In a conspicuous (and calculated) act of old-world gallantry, Philby asked a journalist sitting in an armchair if he would mind giving up his seat to a lady journalist forced to stand in the doorway. The man leaped to his feet. The television cameras rolled. What followed was a dramatic tour de force, a display of cool public dishonesty that few politicians or lawyers could match. There was no trace of a stammer, no hint of nerves or embarrassment. Philby looked the world in the eye with a steady gaze and lied his head off. Footage of Philby’s famous press conference is still used as a training tool by MI6, a master class in mendacity.”