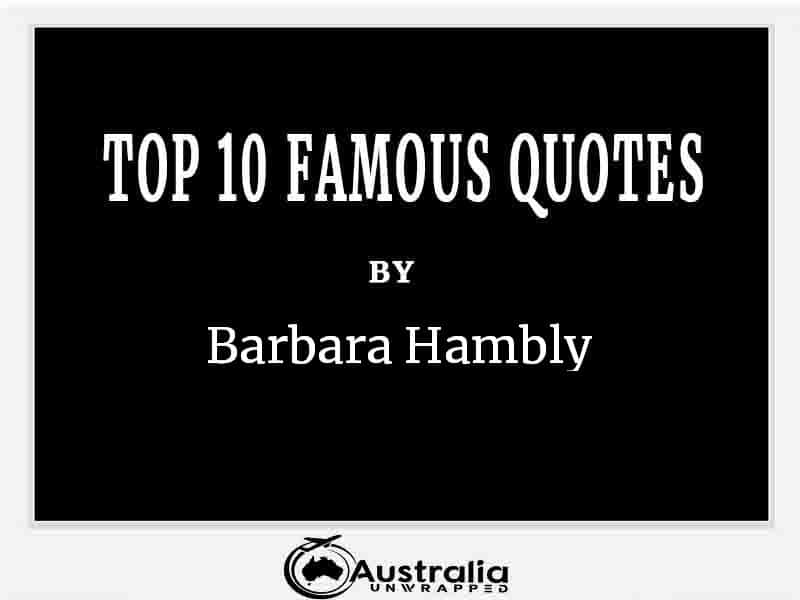 Quotes, who doesn’t love a good quote? This series of articles we look at Top 10 Famous Quotes by Author Barbara Hambly, author quotes are always a challenge and fun to pick, with Barbara Hambly you will find my ten favourites of Barbara Hambly’s quotes.

“The question is always the answer, provided you want the answer badly enough.”
― Barbara Hambly, The Time of the Dark

“I simply don’t shine in company. Mostly I prefer to retreat with a book.”
― Barbara Hambly, Bride of the Rat God

“God has judged me all my life. But that is God’s privilege, my lady. Not yours.”
― Barbara Hambly, The Armies of Daylight

“We love people differently at different stages of our knowledge of them. As love changes its hape and its nature, we have to decide what we’re going to do about that love on any given day.”
― Barbara Hambly, Night’s Edge

“As Cinderella would probably tell you, even a prince who only recognizes your footwear is preferable to a lifetime of cleaning grates.”
― Barbara Hambly, Sold Down the River

“But that was the first thing I had to learn about her, and maybe the hardest I’ve ever learned about anything—that she is her own, and what she gives me is of her choosing, and the more precious because of it. Sometimes a butterfly will come to sit in your open palm, but if you close your hand, one way or the other, it—and its choice to be there—are gone.”
― Barbara Hambly, Dragonsbane

“One shouldn’t allow oneself to be intimidated by something that can be picked up and tucked under one’s arm.”
― Barbara Hambly, Bride of the Rat God

“The music had ceased. Alex walked over to the gramophone, wound it up again, and put on more blues, a woman singing this time, gay and sad at once, like a stranded angel who had traded holiness for humanity but remembered what it used to be like to know God.”
― Barbara Hambly, Bride of the Rat God

“Dragonsbane, they called him.

Or a dragon, anyway. And, he’d later found out, not such a very big one at that.”
― Barbara Hambly, Dragonsbane

“Lexington wasn’t a great city, like Philadelphia or New York, but around the Courthouse square, and along Main Street and Broadway, brick buildings reared two and three stories tall, and it was possible to buy almost anything: breeze-soft silks from France that came upriver from New Orleans, fine wines and cigars, pearl necklaces, and canes with ivory handles shaped like parrots or dogs’-heads or (in the case of Mary’s older friend Cash Clay) scantily dressed ladies (but Cash was careful not to carry that one in company).”