Australian Gambling Regulations: Is It Illegal To Gamble From Home? 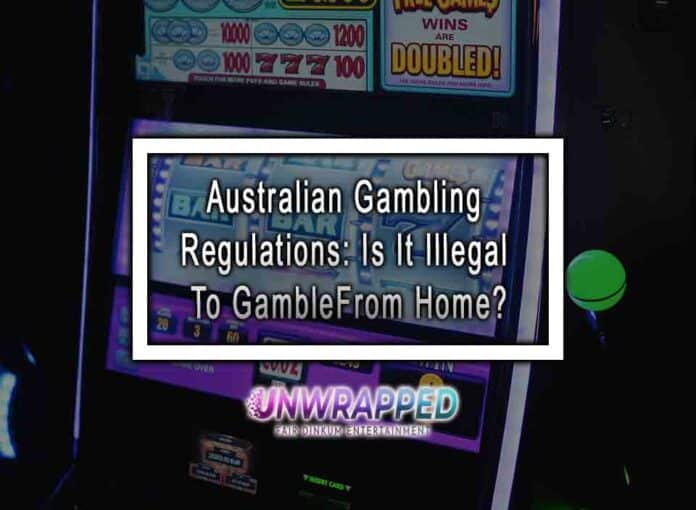 People have a wealth of leisure activities to enhance their quality of life. Who wouldn’t choose it if the potential for earning extra cash was included?

Additionally, psychiatrists advise figuring out a way to make your interest your profession, so you never have to work a day in your life.

Since gambling is only seen as a hobby or recreational activity in the country of kangaroos and koalas, this is precisely what it means to Australians.

However, if you believe things haven’t always been ideal, reconsider. Gambling took about 150 years to get to where it is today in Australian culture.

A gambler wagers money or something of real value on the outcome of an event that is decided entirely or in part by chance, such as a sporting event or a horse race, with the hope of winning a prize or something else of value, even though it is difficult to provide an all-inclusive legal definition of gambling in Australia.

As free-to-enter events intended to promote trade, “trade promotions”—often referred to as “sweepstakes” in other jurisdictions—are also subject to gambling legislation in Australia.

However, some Australian states and territories require the promoter to obtain a permit from the relevant regulator before engaging in these activities.

This is true even though these activities are generally permitted, subject to compliance with requirements concerning factors like draw integrity, publication of results, eligible prize types, and others.

Also Enjoy: What Does Parlay Mean in Gambling?

In Australia, the practice and promotion of gambling are generally prohibited in all areas. For gambling activities carried out with a license, there are legal exclusions.

These actions consist of the following:

The Australian federal and state governments’ paternalistic approach to regulating gambling services is a response to the worries raised by the unfavorable societal effects of gaming.

However, along with racing and sports, gambling has long been ingrained in Australian culture and identity and is widely accepted there.

Early in the 20th century, states and territories began to regulate gambling, which is how the current legal system came to be.

Since the advent of online betting in the late 20th century, the industry has thrived despite the ongoing conflict between the pressure on governments to reduce problem gambling behavior and the economic returns provided by the gambling sector to state and territory governments, sporting and racing bodies.

A variety of state and territorial legislative and contractual agreements govern the exclusive conduct of totalisator sales and the retail (i.e., terrestrial other than on-course bookmaking) operations of the respective license holders.

Except for charitable lotteries and trade promotion lotteries in each state and territory, most lottery licenses now in circulation are owned solely.

Some states and territories hold all the licenses for land-based casinos, whereas other authorities award numerous permits (e.g., New South Wales, Queensland, and the Northern Territory).

The Interactive Gambling Act of 2001 (Cth) forbids the sale of anything resembling online casinos to Australians (IGA).

All states and territories operate gambling machines in clubs and hotels with licenses (other than in Western Australia, where electronic gaming machines are only operated at Perth Casino).

Nevertheless, some exclusions exist, such as the Anti-Money Laundering and Counter-Terrorism Financing Act 2001 (Cth) (AML/CTF Act), a federal law that also applies to operators of land-based gambling establishments.

The many licenses typically available under state and territory legislation can be used to understand land-based gambling.

Retail betting includes placing pari-mutuel (totalisator) wagers on specific sports, including thoroughbred, greyhound, and harness racing, as well as fixed-odds wagers on these and other authorized events.

The TABs provide terminals in hotels and clubs, racetracks, or dedicated retail locations for their land-based retail wagering.

Each state or territory has received a special license to offer land-based lottery goods, similar to retail gambling.

Consumers can typically acquire these items through merchants, with newsstands being the most popular place to do so eg, operators of legal gaming machines (i.e., slot or poker machines)

Additionally, Victoria combines a pre-commitment requirement with a venue, region, and jurisdictional cap on the number of gaming machines (which players can opt out of).

Read More: Best Books About Gambling You Should Read In 2022

There are a certain number of casino licenses available. Except for the current casino licenses held by Queensland and the Northern Territory, there is typically just one per state and territory.

The Star has been granted one casino license in NSW. Recent legislative revisions loosened the cap, and Crown Resorts received a restricted gaming license for its Barangaroo development.

In accordance with Section 143 of the Casino Control Act 1992 (NSW), this license was the subject of an investigation known locally as The Bergin Inquiry. It was determined that the applicant was unfit to hold the license.

To remedy these problems, Crown Resorts is currently in consultation with the Independent Liquor and Gaming Authority.

First, internet gambling cannot be something that the IGA forbids. Online casinos, bingo, and poker are a few illegal forms of online gambling, as previously mentioned.

The federal regulator, the ACMA, manages the IGA. Internet service providers are frequently asked to block websites that violate the IGA or are for unlicensed operators operating in or offering services in Australia due to the ACMA’s increased proactive enforcement of the IGA in recent times.

The ACMA has made stopping unlawful internet casinos sale in Australia a top priority. Recently, the emphasis has widened to include affiliate marketing websites that direct users to illicit gaming websites.

Must See: A Full List of Interesting Online Games That Pay Real Cash

The regulations are designed to ensure that any company that offers gambling games online can be trusted and is not fraudulent.

The regulations also help protect players from fraud, theft, or abuse by the companies that provide these games.

In finality, it is not illegal to bet from home in Australia if you stick to the stipulated guidelines by the above regulations.

More Reading: Aussie Play Review. Is It The Best Online Casino To Win Money In Australia?

Countries Where Gambling Is Illegal

Online Gambling In Australia: Is It Legal?